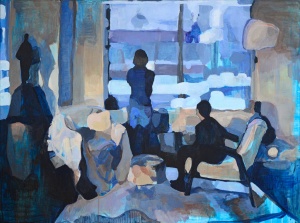 My last two series of paintings—Therapy: Part I (2011) and Therapy: Part II (2013)—investigate the psychological and the solitary, and the interplay between reality and dream.

I used film stills from Ordinary People, The King’s Speech, and the HBO series In Treatment, as compositions for paintings. I overlaid washes and applied thick paint layers to transform specific figures into archetypal images exploring the human condition. The narrative is left up the viewers’ imagination in this series of haunting and moody paintings.

My current work explores themes of connection versus disconnection, dreams versus reality, and the conscious versus subconscious. Using new mediums—including gouaches on paper and a film I shot using two actors—I create a dreamlike narrative, unraveling the central character’s inner world.

I photograph my process and the paintings as they develop, and will splice together these images for a film. The paintings and film create a dreamlike mood, where time and season collapse.

My decision to become an artist was very gradual process of immersion and exposure to the life of an artist. When my family moved from Hong Kong to Brazil when I was ten years old, I started to copy figure drawings from a book I found. I filled my entire sketchbook with drawings of hands, feet and faces. After seeing my drawings, my parents took me to meet a Brazilian painter, Roberto D’ Oliveira. Although he mainly taught older students, 18 years and up, he agreed to take me on in his studio as a student on weekends, even though I was only 12 at the time. While I loved being immersed in a professional artist studio, and even showed a painting in an exhibition, but I didn’t imagine pursuing art professionally. Yet, the materials in the studio made an everlasting impression on me.

After college, where I studied Psychology, Political Science, and Film, I moved back to New York . I worked as a script-reader and interned at film production companies, while taking painting classes at the Art Students League on the weekends. It was at the League that I realized I wanted to, and could, carve out a life as an artist. Being exposed to other serious art students and professional artists showed me how I could find my own path.

I was born in Hong Kong, moved to Brazil when I was ten, and came to New York City at fifteen years old. I have no country of origin. My parents are not American, and although I grew up in an English-speaking household, my parents speak Arabic to each other. Before moving to New York, I went to a British school, where my best friends came from many different ethnicities and nationalities. When we moved to Brazil, I went to an international school with a duel curriculum taught partially in Portuguese. I didn’t speak Portuguese at the time, and my school experience constrained how I expressed myself verbally. So, I turned to visual expression. I started carrying a sketchbook with me everywhere and sketching constantly.

Growing up in places where I didn’t speak the native languages created a sense of not fitting in. I think many people who become artists have formative experiences that place them in the position of observer, rather than participant. If I had grown up with a sense of belonging, a sense of place and easy communication, I think my art would be very different. I remember watching a documentary on Martin Scorsese where he describes being afflicted with polio as a child, and spending years isolated in his bedroom, watching the kids playing outside from his window—defining the way he watched the world—almost like scenes in a movie.

Conceptually, I am interested in memory. In 2008, I did a series called Borrowed Memory. Attempting to reconnect with my blurry childhood memories I made drawings using white charcoal—(the white representing memory)—on toned paper of old snapshots from my childhood in Hong Kong. I also used images I found on the Internet of other children in Hong Kong in the 1970’s. Working from other people’s photographs allowed me to borrow their memories, to incorporate them into my psyche as if they were my own.

I continued to explore memory in my 2011 series called Therapy. I painted from film stills from both television and movies that resonated in some way with my own experiences. I also became intrigued by the idea that light, in an image, could tell the story of the subconscious. Those paintings are about the ways that light reveals a mental landscape.  In Therapy: Part II, I shifted my focus from memories to dreams. I used still images from The Kings Speech to explore the inner life of a solitary character  (as opposed to a relationship between two characters which was the focus of Part I).

The mediums I used; white charcoal, dark toned paper, gouache, and in select paintings monochromes, distinguished my painted scenes from being mere illustrations of the film stills. I used these mediums to indicate light and mood. I chose to work from unmemorable stills—the split seconds you don’t notice. 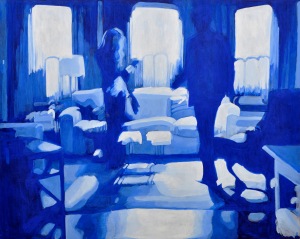 I definitely do not wait for inspiration. As a mother of two young children, and director of On Art (an art tour company), I have limited hours when I can work in the studio; I just get to work right away when I am there. I have moments—when a body of work or a project is completely finished—when I feel as if I am at a loss as to what to do next. At those points I turn to writing. I always write down exactly what I’m feeling. For instance, when I finished Therapy: Part II I wrote, “I don’t know where I want to go from here.” Once I write down my feelings of stagnation, a new realization comes. Using writing after Therapy Part: II, I realized I wanted to create my own moving images, rather than work from pre-existing movies.

I’m interested in Irving Petlin, whose work is often about memory. My other influences are Donatello, especially his Mary Magdalene sculpture, and William Kentridge, who is a huge inspiration.  I once heard him say that “meaning accrues through process” and that resonated with me.  While I start with a concept, the idea often changes as I work, and process is integral to everything I do. What I love about Kentridge is how he evokes memory and tells a story without being didactic. He combines the still and moving image, taking something old (drawing in charcoal) and making it new and exciting.

When I’m not making art, I’m researching and talking about art. I run a small company, On Art, that provides independent tours—that include private talks with artists, curators, and dealers—in galleries and studios throughout New York City. Learning about other people’s work can be very inspiring.  I alternate every three months between my own studio artwork and the art tours. I am also a mother to two great girls, Mia and Lila,  who are seven and five years old. They fill all of my time—often with their own art projects–outside of the professional art-related work I do.

She has been the recipient of grants from the Vermont Studio Center and the Newington-Cropsey Foundation.

Viviane has had six solo exhibitions in New York galleries. She has also exhibited in many group exhibitions including at the Museo de la Cuidad-Mexico, the Albright Knox Gallery and the Dahesh Museum.

Her work is included in many private collections and has been featured in the Wall Street Journal, Gotham magazine, Time Out New York, The NY Press, American  Artist and Sculpture Review magazines as well as in various catalogs and papers. 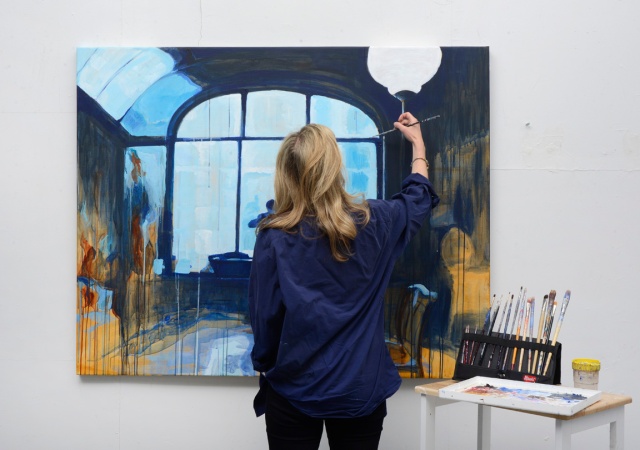 Founded in 2013, Artdose Magazine is an independent print and digital art magazine committed to connecting and supporting the visual arts in Wisconsin. Published by Frank Juárez, the magazine is premised on the belief that we all share common goals of introducing, engaging, and offering others diverse art experiences. Artdose appears in print as a bi-annual art magazine, through a weekly art e-newsletter and on Instagram and Facebook. We have expanded regionally effective July 2022. About Frank Juárez Frank Juárez is a publisher, former gallery director, award winning art educator, artist, author, and arts advocate living and working in Sheboygan, Wisconsin. Organizing local and regional art exhibitions, community art events, facilitating presentations, supporting artists through professional development workshops, use of social media and networking has placed him in the forefront of advancing and promoting local artists and attracting regional and national artists to collaborate, network and exhibit in Wisconsin.
View all posts by Artdose Magazine →
This entry was posted in Uncategorized and tagged #paper, film, memory, New York City (NYC), Paint. Bookmark the permalink.