My work is an examination and exploration of various phenomena found in nature. I tend to get lost in and obsessed with the patterns and textures encountered in my travels. The work is translated into installations, prints and other mixed-media pieces based on these observations.

I grew up in Kenosha, Wisconsin; which is a small town on the southeast border of Wisconsin on Lake Michigan. My proximity to Milwaukee and Chicago was great in terms of looking at art, but I stayed in Kenosha for my undergraduate degree. After, I was a graphic designer for five years in the same region, so I didn’t really get to travel until that time. I remember my first flight was to Detroit for work and that I was really excited about seeing new things both architecturally and in nature. This is where my passion for investigating nature began and I decided to pursue my graduate degree in Athens, Ohio. All of my work in those years stemmed from exploring new places including two month-long study abroad programs in Italy and in England. All of these experiences definitely shaped how my art evolved.

I typically go to the studio with a plan. I am not one that sits there thinking about what to do next. My ideas come to me during random times such as sitting on the el on the way to work or home, when I am on a walk or when I am driving long distances. I keep a small book handy to write down ideas or to do quick drawings of those ideas. If I get to the studio and am the only one there, I typically get a lot done on the project of that day. Occasionally, a few projects are in the works; but most of the time I focus on one project at a time. If my studio mates are also there, we tend to talk about various things ranging from what’s going on in life, at work and also what we are working on in the studio. It is a good time to brainstorm. 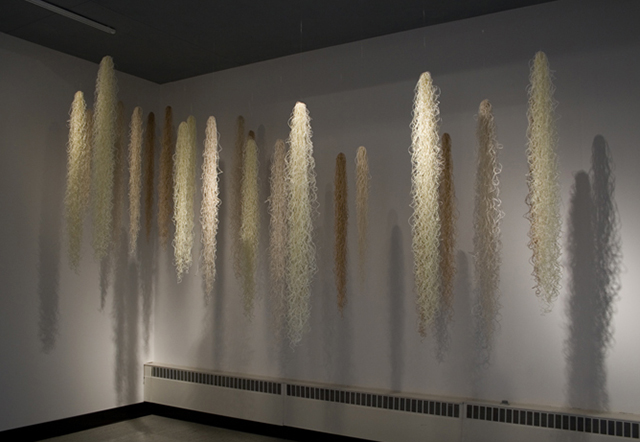 When I first started making art, I didn’t think that it would become a lifelong endeavor. In high school, I knew that I wanted to teach but wasn’t sure what area to focus in. I had interests in Spanish, Math, and Art. Getting a small scholarship from the Art Department at the University of Wisconsin-Parkside made my decision for me. In that time, I was mostly interested in painting and didn’t really get into printmaking until after I graduated. Both are two-dimensional forms of art, so I never imagined through my time in graduate school that I would transition into making installations.

I am a morning person. The best time for me to make art is early morning through about 2:00. When working on installations utilizing sewing or attaching monofilament, I am able to also do this in the evenings. I usually use one weekend day at the studio and then other times when I can depending on my work schedule.

Within the last five years, my work has moved more to installation. Previous to that, it was more of a two-dimensional imitation of what I was looking at. The work was becoming more zoomed in on nature, so it became almost unrecognizable. The installations opened up an entirely new process and set of phenomenon to think about while making the work such as actual movement and lighting during different times of the day. By making the installations, my drawings and prints started to focus on some of these aspects of the installations. The work stayed the same in terms of inspiration coming from things encountered in nature.

My studio mates, John and Annette have a large impact on the work that I do. We all went to graduate school together at Ohio University many years ago and are lucky enough to have come to Chicago together. We are able to have good conversations about each other’s works and are able to grow because of those conversations. John is also my husband, so we constantly bounce ideas off of each other about our own work and also give recommendations for each other’s ideas. Annette has similar interests and processes to what I am drawn to, so she is a great source of conversation and experimentation when we are working on new ideas in the studio.

The reflection after the death of my father also drastically changed my art. I spent quite a few hours under blooming cherry blossom trees and realized what a sense of peace that I was experiencing there just looking at and hearing the branches move in the wind. It was then that I realized I wanted people that encountered my art to have that same sort of feeling of getting lost into a peaceful sense.

I think that I would really enjoy curating exhibitions. I had the opportunity to curate a few in my time as an artist and liked being able to find connections in various media that I typically wouldn’t look at together to form cohesive shows. I also enjoy arranging and hanging works so that there is a visual flow to the space. 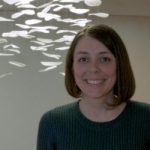 Connie received an MFA in Printmaking from Ohio University in 2005 and a BA in Painting from the University of Wisconsin-Parkside in 1996. She also has attended two study abroad programs, in Italy and in England, and has since traveled to Mexico and Ireland.

Since receiving her MFA, she has taught courses in Drawing, Computer Art, and Printmaking at Bloomsburg University, the University of Wisconsin-Parkside, Ohio University, Anchor Graphics/Columbia College, North Park University and Carthage College. Her work has been included in both juried and invitational exhibitions nationally and internationally and has won prizes in national printmaking competitions. Her prints are featured in many permanent collections such as the Racine Art Museum, Derby Fine Arts, Ltd., the Sichuan Academy of Fine Arts, and the National Small Print Collection at the University of Wisconsin-Parkside. She participated in a month-long residency at the Vermont Studio Center and serves as an elected officer for the Mid-America Print Council. Recently, she was commissioned to create two small installations for Freeman Health Systems in Joplin, Missouri. 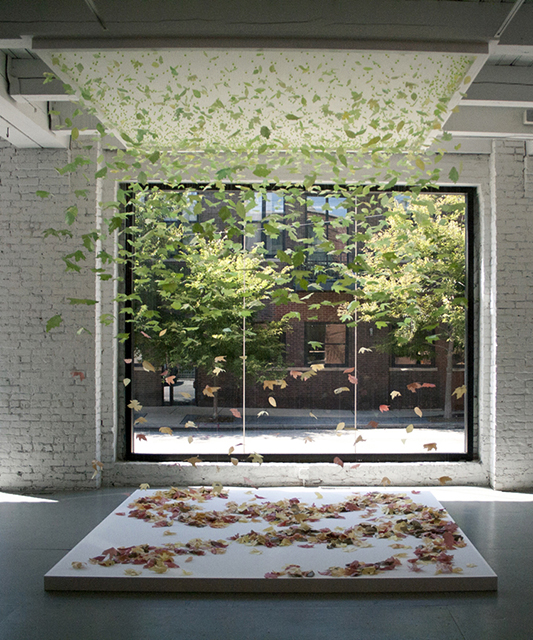 Founded in 2013, Artdose Magazine LLC is an independent print and digital art magazine committed to connecting and supporting the visual arts in the Midwest. Published by Frank Juárez, the magazine is premised on the belief that we all share common goals of introducing, engaging, and offering diverse art experiences. Artdose Magazine LLC appears in print as a bi-annual art magazine, through a weekly art e-newsletter and on Instagram and Facebook. About Frank Juárez Frank Juárez is a publisher, former gallery director, award winning art educator, artist, author, and arts advocate living and working in Sheboygan, Wisconsin. Organizing local and regional art exhibitions, community art events, facilitating presentations, supporting artists through professional development workshops, use of social media and networking has placed him in the forefront of advancing and promoting local artists and attracting regional and national artists to collaborate, network and exhibit in Wisconsin.
View all posts by Artdose Magazine →
This entry was posted in Uncategorized and tagged Chicago, Drawing, Installation, Mixed-Media, printmaking. Bookmark the permalink.