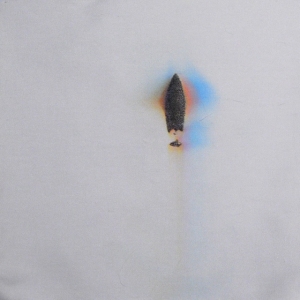 My photo transfer work is about the complexity of stillness. When I think about what it means to be still and just be in your surroundings, there can be an uneasy feeling or conversely a tranquil feeling as well. I appreciate the subtlety of this experience and want to investigate it in my work. I keep the work within a vast open space and focus on one dense area to push the idea of stillness. The stillness can also be seen as isolation.

I enjoy the photo transfer process and the unpredictable nature of it. I can have an idea of how the image will turn out and inevitably I will be way off.

I’m a sculptor at heart, but have been making 2d work most recently. My grad-work was object/installation-based, where I would incorporate video. That was definitely a point of departure for me. My videos were short loops of small actions repeating, like a head turning or a hand writing the same sentence over and over. I continue to be interested in small moments and the impacts and possibilities of them.

While on a trip with my mom I noticed we were going through a lot of tunnels. These were enormous tunnels that went through the sides of mountains. I took a number of photos as we went through them and as we exited. There was something very exciting to me about the possibilities that existed on other side of the tunnels. Would there be danger? Excitement? Beauty? Tragedy?

I brought these images with me into the studio and started to produce photo transfers—a process that is in itself unpredictable. The resulting images are abstract dark spaces in a vast open white space where the uncertainty of a moment is frozen in time. 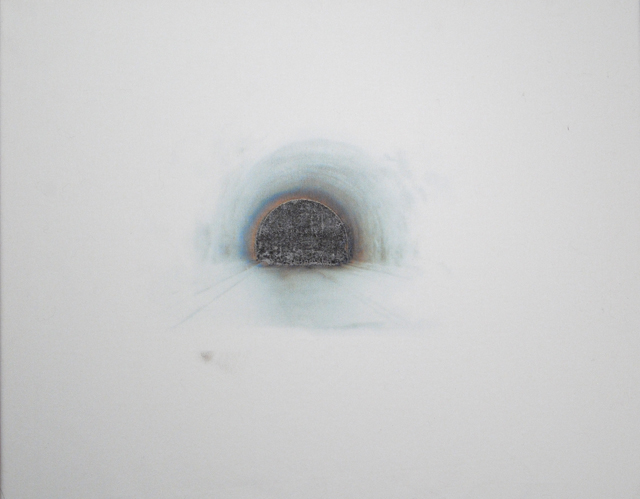 My studio practice is chaotic, I tend to work in bursts as the ideas come. I don’t have a typical set schedule for when I work in the studio, rather I’m working on ideas, filming and photographing when an idea strikes.

I don’t think I would’ve ever imagined I’d have an artist-run gallery space or be part of a project like 365. I have loved every minute of it. When my partner, Zina Mussmann, and I first rented our studio space it was not our intention to transform it into a gallery space. The building that we are in has a number of galleries and artist studios. We were asked to participate in an open studio event the building was having, and after taking part in a couple of these, we saw the possibility the space could have. We decided to reimagine the space and open it up for other artists to show. We now keep our studio practice in the back room and reserve the exhibition space for local and national artists. It has been a tremendously rewarding experience that I’m very glad we’ve taken on.

A little bit of both, I have some set time in the studio. But, I mostly work as time allows. For a couple of years, my schedule has been erratic so I had to fit in time when I was able. This year I am freeing up more time so I can actually have a set studio schedule. That’s at least the plan for now. 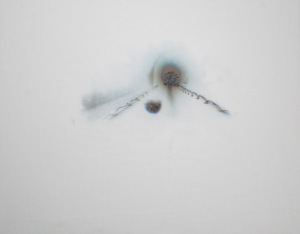 My work over the past five years has become more refined and minimalist. When I first start working with a different format or concept I tend to keep adding additional layers. It can be hard to pare down and just stop and edit a piece to only the essentials. I’ve decided I can say much more with empty space. Conceptually, I think I’m still working in the much the same direction. My work is still concerned with navigating the space between small actions. For example, a recent series of mine was filming a candle burning. At the time, I was so busy and being pulled in many different directions that I felt I really needed to just stop and not be distracted by anything. So, I filmed a candle burning from beginning to end. I forced myself to spend the time watching the flame flicker down the wick. It was a calming experience that I needed at the time. The resulting images that I produced are transfers from stills of the video. When you see the images, you only get the brief moments that I share, but there is so much that happens in the space between each image. It is these in-between spaces and the stillness that accompanies these experiences that interest me.

My biggest influence would be my partner. We guide each other in right direction and help one another every step of the way. And since she’s also an artist she never sugar coats things for me, which I appreciate. Being part of the 365 project with Zina and Frank has been amazing. Seeing so much great work has had a profound impact on me as an artist.

I think the biggest influence on me is just living and letting life happen. It’s when I’m not expecting an idea to come, or stressing over what I’m working on that my best ideas will come to me. And, I listen to a lot of Morrissey, and I’m sure has an impact on my work! Maybe that’s why the work has become more somber and sedate?

Funny story about that. During high school, I procrastinated on deciding a theme for my studio art class that I had to explore for the entire year. When the time came to pick something I panicked and chose chairs. Well after spending a year making small metal chairs, I thought I might like to be a furniture designer. I’ve used chairs a bunch in my work and still continue to, but I never fulfilled that dream of becoming the next great furniture designer. Maybe someday I suppose, there’s still time.

Rachel Quirk is an artist and co-directs the artist-run space, Greymatter Gallery in Milwaukee, Wisconsin. She received her Bachelors degree in Sculpture from the University of Wisconsin-Milwaukee and her Masters in Fine Arts-Sculpture from Northern Illinois University. She has exhibited nationally and is busy working on a new series.

The purpose of this project is to introduce its readership to a diverse collection of art that is being produced at the national and international level. Our goal is to engage the public with information regarding a wide array of creative processes, and present the successes and failures that artists face from day to day. The collaborators hope that this project will become a source for exploring and experiencing contemporary art in all its forms.
View all posts by 365Artists/365Days →
This entry was posted in Cut Paper, Photography, Video and tagged contemporary art, Milwaukee, photo transfer, photography, Video. Bookmark the permalink.