I have been painting with acrylics on plywood for several years. The painting’s outer shape and edge had begun to interest me and moving from paper to wood allowed me to explore this aspect more substantially. The boards are first cut to size with no other concern than the achievement of an interesting single shape which may be more or less irregular. The painting process begins, after careful consideration of this shape, with an opening move; each further decision is then made in response to the outcome of the previous one. I do not make preparatory drawings as such; the elements of my paintings are based on personal visual memory and are sometimes developed through sketching.

It is important that the painting is a step ahead of me. This creates the space needed to stay agile and responsive in the process – not to plan and lead but to put one foot after the other, be watchful and recognise opportunities as they emerge. The finished painting can never be anticipated at the outset; when successful, it achieves a certain level of incomprehensibility without being wholly inaccessible. The aim is something that appears simple but might not be that easily grasped.

My initial impulse was to say at 18, when I decided to move to England for a couple of years and thought I might as well do some studies while I was abroad, So I applied to take Fine Art, History of Art and Italian at University near London. At the time I thought of this as a temporary move, something transitional. I never meant to complete a degree; the plan was to return to Berlin and study Architecture or Design or perhaps become a cabinet maker. I’m not sure when exactly I finally felt I was an artist and would always be one. But it was much later, a few years after completing my BA, in my late twenties, when I had been living in London for a while. I decided to give up my studio and stopped painting for a bit to check whether I had just been carrying on for the sake of it…  That was an important test and significant turning point. I became serious about my work then.

I can’t say I had a particularly cultured upbringing but I had always enjoyed drawing and making things as a child, as early as I can remember, and I think my mother encouraged that ( it was probably  the only time I was quiet). It isn’t immediately obvious from my background, why I became an artist. It might have been a matter of wanting something different, something I had caught a glimpse of in the copious amounts of books I devoured when I was younger. I think that my understanding and appreciation of the visual arts really developed rather late and slowly. Though I could engage with painting intellectually and appreciated them aesthetically, I didn’t truly “get it” until I was floored by the Philip Guston show at the Royal Academy in 2004. That was my eye opener and from there on I started to really see art and make connections everywhere: Richard Tuttle, Raoul De Keyser, Phyllida Barlow, Graham Sutherland, Helen Frankenthaler… well that list is long of course.

I am not concerned with concepts in my work.

The intensity and personal challenge of painting – I am 100% responsible for everything that goes on in my studio. It’s the most self-involved activity I indulge in – endlessly engaging, immediate, fresh and exciting. Just keeps on giving. And then there are these moments of pure giddy joy when I have put the final touch to a painting, step away and realise it’s good – that it really works and is entirely its own.

There are many artists I greatly admire and whose work means a lot to me. But while they certainly give me confidence, inspire and fire my ambition to continuously improve my practice , I can’t say that they influence my work. I can only follow my own trajectory. The only other artists who actually influence me are my peers who come to visit my studio and who I can talk to about my paintings. Their generous and honest engagement and criticism are immensely encouraging and help me to push my work further.

I see exhibitions of course. Also read a lot (novels, non-fiction, poetry, art books, magazines), love the theatre, all kinds of music and I try to get out into the countryside as much as I can. I cycle, run or swim every day.

Katrin Mäurich was born in Berlin and moved to the UK in 1999 where she gained a BA in Fine Art from Reading University in 2003. Katrin has been living in London for the last ten years. Apart from exhibiting her paintings regularly, she has also been the founder and organiser of series’ of artist talks and art salon events. 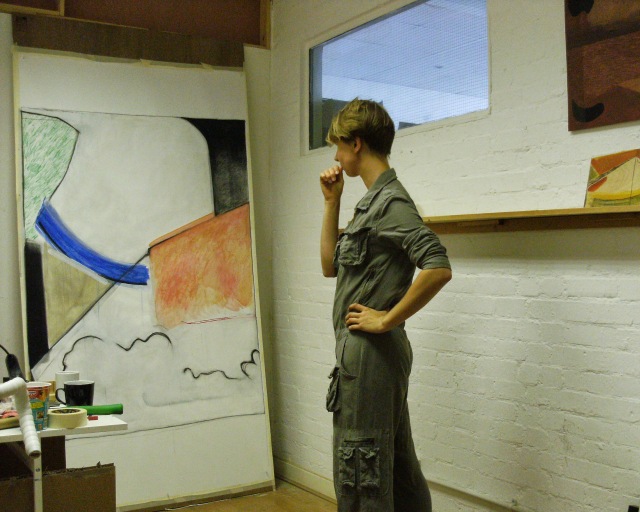 Founded in 2013, Artdose Magazine is an independent print and digital art magazine committed to connecting and supporting the visual arts in Wisconsin. Published by Frank Juarez, the magazine is premised on the belief that we all share common goals of introducing, engaging, and offering others diverse art experiences. Artdose appears in print as a bi-annual art magazine, through a weekly art e-newsletter and on Instagram and Facebook. About Frank Juarez Frank Juarez is a former gallery director, award winning art educator, artist, author, and arts advocate living and working in Sheboygan, Wisconsin. Organizing local and regional art exhibitions, community art events, facilitating presentations, supporting artists through professional development workshops, use of social media and networking has placed him in the forefront of advancing and promoting local artists and attracting regional and national artists to collaborate, network and exhibit in Wisconsin.
View all posts by Artdose Magazine →
This entry was posted in Uncategorized and tagged abstract, Berlin, German, London, Painting. Bookmark the permalink.