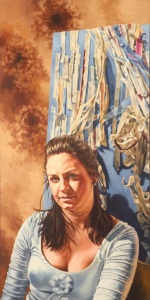 Recent work includes large scale oil on canvas figure paintings along with fabric/costume constructions that blend narrative elements from mythology and alchemy, the forerunner of modern science. The intent is to suggest multiple interpretations rather than a straightforward illustration of a specific narrative, a fitting choice in that alchemy by its very nature is about the process of transformation. The figures are portraits of specific individuals who are well known to me rather than idealized types. This has given the narratives an added “charge” and has served to ground the subject matter in the here and now. At first glance, it seems that a “real” space is being defined, but in fact, the painted images are constructed from multiple viewpoints and lighting systems. Passages of volumetric rendering set next to more abstract, painterly areas, result in the creation of a virtual, shifting world where nothing is quite what it seems.

As an undergraduate at Vanderbilt University I majored in art history.   Later I chose the path of making art but have found that everything I have done is filtered through the lens of history—even in my questioning of that history.

I spend a lot of time in the studio and find it to be much like a meditative practice. Over the years, I have found the construction of “paint passages” in my paintings to be much like the adding or taking away of layers of experience, memory and dreams.

I have become more and more of an independent agent, and as such, have developed a number of personae to bring this about.   For example, although I’m an introvert, I have found that I am also very good at engaging an audience, in person, and behind the scenes in my role as an artist and teacher.

The best time for me to work is mid afternoon until later in the day. In the morning, I spend time writing and drawing, but then I shift more into right brain thinking as the day progresses. As a full time university professor it is challenging to live “equally” in the studio and in the classroom. However, over the years I have found the kind of balance that allows me to work in my studio about 20-30 hours per week during the school year and many more hours during the weeks between semesters.   One world feeds the other. 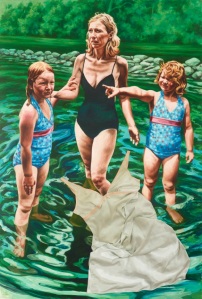 I am still interested in working with figures in a narrative but this has expanded to include other “non-traditional” aspects of painting, including sewing, costume fabrication and collage. Currently the two practices are combining in new ways.

Friends, family and people I encounter every day form the basis of my figure narratives—to the point where I paint some of the same people over and over again. Their body language, dress and immediate environments influence the direction of my paintings in a profound way.

Yes, I’m a good writer and an even better editor. This has helped me in the profession of teaching in the arts.   I am also most interested in film making, from the point of view of a cinematographer.

Virginia Derryberry’s work is shown regularly in solo and group exhibitions throughout the United States, and her paintings have been written about in an extensive list of publications including New American Paintings, volume 82, 2009 and the 15th anniversary edition, 2010.  Her upcoming solo exhibition, Private Domain, which opens in February, 2016, at the S. Tucker Cooke Gallery, UNC Asheville, will subsequently travel to venues in South Carolina and Alabama.  She has received such awards as Outstanding Artistic Achievement from the Southeastern College Art Association (2013); Visiting Artist at the American Academy in Rome (2010 and 2016); the Distinguished Teacher of the Year Award (2005) and the Feldman Professor Award for scholarship (2010) from the University of North Carolina Asheville; the Annual Artist Fellowship from the Southeastern College Art Association (2005); a residency at Moulin a’ Nef, Auvillar, France, through the Virginia Center for the Creative Arts (2004) and two Individual Artist grants from the state of Georgia (1995 and 1993).  Her drawings and paintings are in numerous private collections throughout the Southeast and in the permanent collections of the Carnegie Museum of Art, the Morris Museum of Art, the Museum of Contemporary Art of Georgia, the Asheville Museum, the Bank of America Southeast Collection, and the Tennessee State Museum. Her work is also represented in two major public art commissions: a site-specific installation of 16 paintings at the Hartsfield-Atlanta International Airport and a 10 piece multi-panel painting at the Knoxville Convention Center. She has taught drawing and painting in a number of universities, most recently in the Department of Art and Art History, serving as department Chair from 2009-2014.

The purpose of this project is to introduce its readership to a diverse collection of art that is being produced at the national and international level. Our goal is to engage the public with information regarding a wide array of creative processes, and present the successes and failures that artists face from day to day. The collaborators hope that this project will become a source for exploring and experiencing contemporary art in all its forms.
View all posts by 365Artists/365Days →
This entry was posted in Painting and tagged color, contemporary textile, narrative imagery, Oil painting, representational imagery. Bookmark the permalink.