My work is based on a kind of fusion between painting and sculpture and attend to the own processes of materials with which I work, I use all kinds of textiles and take advantage of the opportunities they can offer me, inside and outside the frame.

It could say that the work is characterized by the pursuit of transformation of disassembly and pictorial genre and assume this practice as a process of research and experimentation.

My childhood was always surrounded by art and various trades. My uncles were a blacksmith and other, basket maker and my father were carpenter… I spent hours and hours watching each one with his technique gave form to the matter. On the other hand, my mother grew up with the Bonnín family and in may house had some watercolors paints( Which I admired as treasures) I spent the afternoons looking al watercolors paints of D. Francisco Bonnín and his painters friends.

The concept of the artist studio has a broad range of meaning in contemporary practice. Artists may spend much of their time in the actual studio, or they may spend very little time in it. Tell us about your individual studio practice and how it differs from or is the same as traditional notions of ” being in the studio “.

I work in my house. My studio occupies a particular space in which I keep fabrics, yarns, threads… the material with which I work, but I use different rooms on the house as a place of storage of the artist works.

What roles do you find yourself playing that you may not have envisioned yourself in when you first started making art ?

The field of teaching… I never thought that I could teach or work with children.

When do you find is the best time to make art? Do you set aside a specific time everyday or do you have to work whenever time allows ?

Whenever I can. I´m addicted to work.

Really I still working under the same assumptions, but my work has been opening up to other media such as collage textile, embroidery, sewing, installation… now I work on other supports , not only the frame

Have you ever been pulled in the direction of a pursuit other than being an artist? What are your other interests ?

I want to continue dedicating myself to the art, in the future… I don´t know, But I hope to continue being linked to this.

Since 2004 my work involves research and experimentation of creative processes that offer me the textiles,

I have made 12 individual exhibitions highlighting “ Mundo Amorfa 06” in the Mapfre Guanarteme Foundation of La Laguna, “ A- Morfologías 08 “ in Cajacanarias   Foundation or “ Geométrica Imperfecta 015“ in La Recova, Santa Cruz de Tenerife .

My work has been show in Canary Island, Cádiz, Madrid, Barcelona, Granada, Zaragoza, , León, Burgos, Guadalajara, Amsterdam and Strasgurgo. I received an honorable mention of the Bienal Regional de Artes Plásticas 2015, the 2nd prize of painting Manolo Millares 2007 and 2nd prize of painting Puerto de la Cruz and in 2006 was selected artist novel by the Foundation Mapfre Guanarteme. 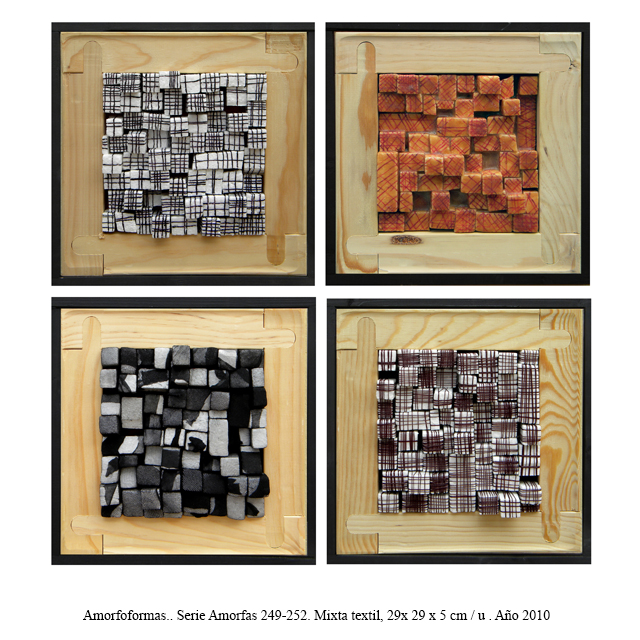 All images copyright of the artist and their used with permission.

The purpose of this project is to introduce its readership to a diverse collection of art that is being produced at the national and international level. Our goal is to engage the public with information regarding a wide array of creative processes, and present the successes and failures that artists face from day to day. The collaborators hope that this project will become a source for exploring and experiencing contemporary art in all its forms.
View all posts by 365Artists/365Days →
This entry was posted in Sculpture and tagged fiber, julia martin gonzalez, sculpture. Bookmark the permalink.