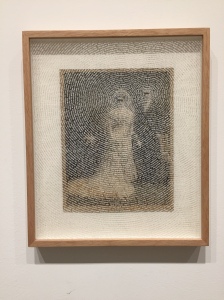 I have had an interest in painting since I was very young. For the last 12 years, I have been mainly working with Mexican portraits from the past. My purpose is to reflect the social cleavage between the public discourse of the different Mexican groups and their true thoughts. I select parts of each piece and surround them repeatedly and obsessively by sentences, creating an impenetrable halo of prejudice.

Such sentences are meticulously written in different shades of white, creating a hypnotic and, in some cases, even an optical effect. These texts or sentences consist of literal or distorted quotes from politicians and moral leaders, as well as common popular sayings and songs, which become more and more contradictory and confusing. I consider myself as autodidactic.

I think a portrait can tell you everything about a certain society. That is why I am very interested in family portraits, either paintings or photographs. .

During my time in collage I´d started to participate in social programs and politics in my community. Those years working gave me the understanding of the kind of country I am living. That´s the reason my work is becoming more political.

The artists are working all the time, not just in their studios. Everything can trigger an idea. Most of the portraits that I use in my work are sold at flea markets in Mexico City. So, the process begins on the street. I choose the photos that I like and store them in a box. Normally, I will have more than 100 photographs to begin with.

Once at my studio, I select the pictures that I like the most out of those. Then, I choose the ones I will just frame, and the ones I will reprint on a large canvas. Some photographs are damaged because of the time, and I like this type of photographs a lot. The damage they show is very interesting to me. Once the photograph is framed, I start the process of thinking what to write.

The important thing is what happens when you read the sentence that is repeated many times and look at the picture. Sometimes I even use the same photograph and apply a different text.

I just do art…

Whenever time allows it. I live in a very complicated city, there is a lot of traffic. Also, I am the mother of two girls, so I work a lot at night and during weekends. Whatever it takes to get it done. My studio is located in my house. I work all the time. I like it a lot.

I was born in the northeast of Mexico and in the north everything is new, plus it looks a lot like the United States. So, when I moved to Mexico City 12 years ago, I was amazed by the architecture. For me, it was very interesting to look at all the old buildings and live in them too. Because of that influence, I started to work with the viceregal portraits. Four years ago, I moved to a 1950’s house in another part of the city. I have to say that my works have changed dramatically after that. 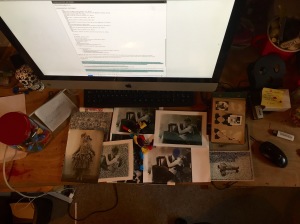 All the artists had an impact from art history. My works change as I move from one place to another.

I studied a career that had nothing to do with art. There was a time that I felt ashamed of that. It was difficult to say that I had not gone to art school. However, when I was in college I started to join groups about politics and social works. This made me realized even more that I lived in a very complex country, in which sometimes you feel like you are in a first world country, but some other times in a very poor one. Such complexity made me understand which were the problems of Mexico that I wanted to talk about. With the years, my work started to become more political.

Eugenia Martinez was born in Monterrey, México, in 1976. Her work as a painter, for the last decade, consists mostly of Mexican portraits from the colonial era to the 1960´s enhanced with metaphoric texts.

Through the images, she reflects the social cleavage between the public discourse of the different Mexican social groups and their true thoughts. Selected parts of the paintings and photographs are surrounded repeatedly and obsessively by sentences, creating -what it seems to be- an impenetrable halo of prejudice.

For her first solo show at Ramis Barquet NY, “I don’t have a dream”, she exclusively uses photographs (a less subjective way than paintings), and executes an extremely meticulous writing of words in different shades of white, creating hypnotic, and in some cases even optical, effects.

The texts, both in English and Spanish, consist of literal or distorted quotes from politicians and moral leaders, become more and more contradictory and confusing.

The discourse of a community without a common dream. 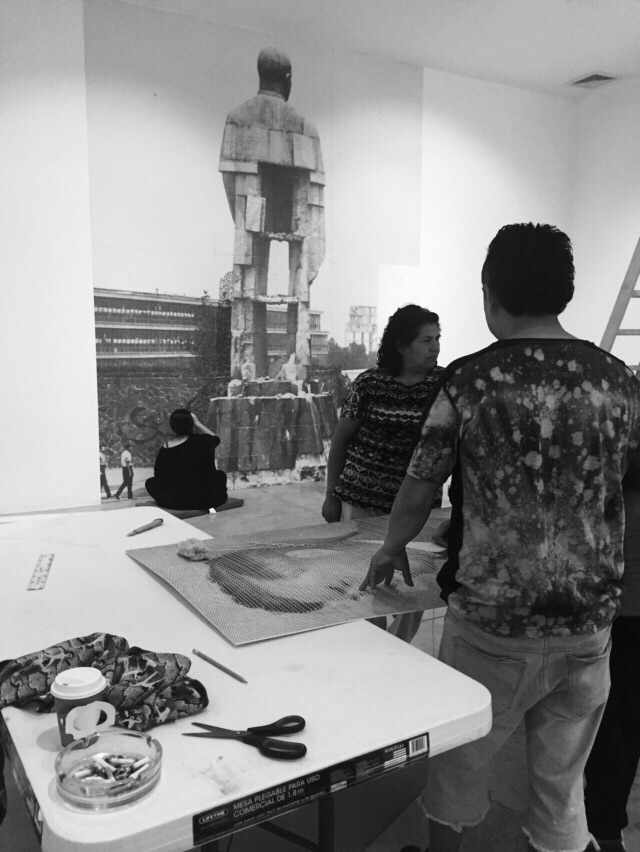 The purpose of this project is to introduce its readership to a diverse collection of art that is being produced at the national and international level. Our goal is to engage the public with information regarding a wide array of creative processes, and present the successes and failures that artists face from day to day. The collaborators hope that this project will become a source for exploring and experiencing contemporary art in all its forms.
View all posts by 365Artists/365Days →
This entry was posted in Photography and tagged Contemporary, Mexico, photography, text. Bookmark the permalink.