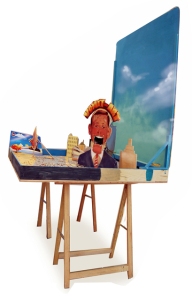 My work investigates the relationship between art and game, breaking the line that separates reality and fiction, through participatory works that directly implicate the public.

My art can be touched, when the humor and irony are also an important component, because it allows me to talk about serious issues in an ambiguous way in which each person gets his own interpretation. I use manual techniques such as installation, painting, illustration or collage, but now I’m starting to use video and other digital resources.

I don’t like to be classify with a specific technique, because i try to use the most appropriate technique for each project . What interests me the most is to learn new things in every art project that I hold, developing research work and confronting new challenges.

My name is Jonathan Notario, I was born in León (Spain) in 1981. I have a Bachelor’s Degree in Fine Arts from the University of Salamanca in 2004. I have received several awards and mentions, as the selection of my video “Moon Park” in the catalogue of the distributor of video art “Hamaca” Reina Sofía Museum, 2015. Scholarship “El Ranchito” Programme of residencies Matadero Madrid – AECID, 2015. Scholarship VEGAP “Proposals”, 2013. The INJUVE Award, 2010. The Award of “Young Art” at the Complutense University of Madrid, 2010.  First prize Carriegos Foundation of “Visual Arts”, 2010. Award of “Acquisition” in the contest of” Young Artists” of Castilla y León, 2007. Prize for comic of “Young art” organized by the board of Castilla y León, 2007.

I have worked with several Spanish galleries as “Blanca Soto”(Madrid) Mad is Mad (Madrid). My work has been exhibited in several samples of artists such as in “Temptations 09” curated by Javier Duero, within the contemporary art fair “Estampa”, the traveling exhibition “Displays of Visual Arts” of INJUVE by Spain and Latin America, curated by Jesus Carrillo with the sponsorship of the AECID.

I have also done editorial projects such as my book, “Portraits of the interior”, financed with the help of VEGAP, with foreword by Jesus Carrillo, presented in MUSAC and in the Central of the Reina Sofia Museum in 2014.

In the last year I have begun to develop an educational art workshops of plastic creation in several public and private institutions such as the National Center of Art Reina Sofía Museum (Madrid), MUSAC (Leon) or the Cerezales Foundation (León). 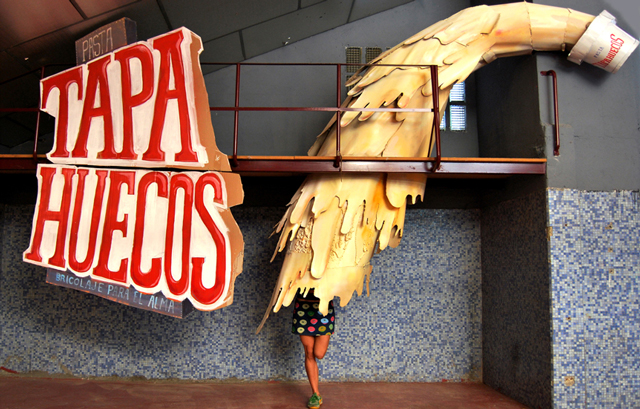 For me it is important to have the study closely since art is part of my life, that’s why my place of work is located in my home

The times that I dedicate my creation are not the normal. I work according to the needs of the moment, can be at night, it occurs to me an idea and i have to go running to the study to work on it without that nothing will stand.

There are months that I work a lot, other months do not work anything, and everything depends on the project that Im doing.

Lately my artwork is more theoretical, mainly because there has been a process of maturation, using currently less pictorial resources and explore more possibilities with the video and other digital tools.

I never imagined the educational aspect, since in recent years I have begun to make artistic workshops in institutions and museums of my country, including the Reina Sofía Museum, the MUSAC, or Cerezales Foundation.

This came by chance and has become an important creative aspect for my own work, create educating. I love to create projects that are generated from a collaboration with students. They learn and I learn from them, and together, we develop an artistic project. It is something that has enriched the individualistic way worked before, to enter in a new era more collective

I work in function of the needs, but generally I have always worked better at night. 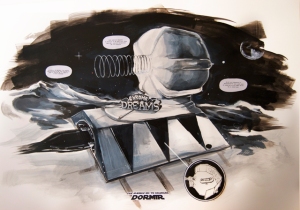 My work has become somewhat more sober, less colorful. I started doing painting with lots of color, and a great sense of humor, using very manual procedures. Now the humor remains and color only when it is necessary, also lately i am using a lot the video and other digital tools instead of using pictorial resources. Each time i focused more on the meaning and concept of the work and sought the most appropriate technique for doing so, without the need to demonstrate that I can paint or draw. If have to be a video made with computer because the idea of the work so requests, I do so, if it is better to use paint, i used, each idea has its particular form to be done. I don’t like to do always the same, for that when I learn to do something new, I leave the previous to learn something new that will allow me to evolve.

I have always wanted to be an artist, film director, or illustrator. The most difficult part of being an artist is to be maintained and sometimes have to reject stable jobs and that’s hard. In my country being an artist is not easy because there is not a great love for the culture and you always have to combine it with other things.

In my case, I do illustration works and freelance design as well as post-production of video.

I have always seen the art as a feedback from other disciplines. What I learn doing arts projects I use it in other areas for a living, or what i learn earning a living, used it to make artistic projects. 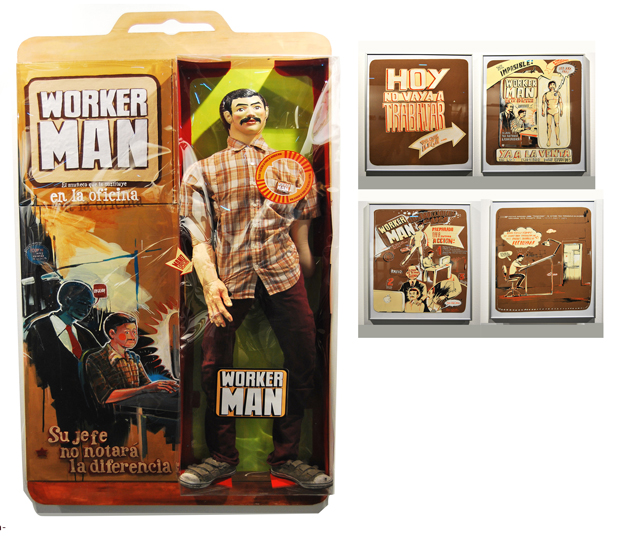 The purpose of this project is to introduce its readership to a diverse collection of art that is being produced at the national and international level. Our goal is to engage the public with information regarding a wide array of creative processes, and present the successes and failures that artists face from day to day. The collaborators hope that this project will become a source for exploring and experiencing contemporary art in all its forms.
View all posts by 365Artists/365Days →
This entry was posted in Sculpture and tagged crazy inventions, fiction and reality, Post pop, spain, vintage advertising. Bookmark the permalink.