My work consists in the perpetual creation parting from the perception of the real and the unreal, turning it to painting, collage, prints and experimentation mixing various techniques.

Chile is, from a geographic point of view, long, narrow and multicultural. The Near North and the Central Region of the country have been my life’s scene. I feel an eternal love for the flowering desert (unique in this world) and for the Andes’ mountain rage. These geographical zones, for whatever reason, shaped me since I was a child, and I keep admiring their immense beauty.

My working place is “the place where I happen to be”, be it a library, a bus, or my room. Personally, I don’t dispose of a studio where to realize my works. However, that does not put a limit to the hours I dedicate to creating art.

For some reason, I’ve always had the intuition of being creating, working on and observing art.

It is always time to create. From day to day, almost like a routine, I assign time for creating, mostly at night. I can pass hours and hours working without feeling the exhaustion which the night brings. 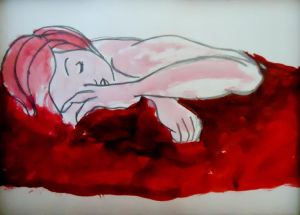 Five years ago, my work was scattered and focused on investigating sources. Now I can see that my work is consolidated in both visual and conceptual terms. At present I can observe a particular and contemporary imaginary , grown eager through constant learning.

Naturally, the family and other close persons have an influence in giving the impulse to having perseverance in working, to continuing one’s way and not to turn away from it. I admire the simplicity of narrative and visual works and the professions that human beings can have when they do not aspire to wealth and recognition. Seeing that, I think it is a way worth following: I am concentrated only in my work, confident that the work itself will talk, travel and cross the world.

In some moment, I studied design. However, time passed by and I felt a necessity for art, I understood that – in spite of its way being vertiginous and sometimes agonizing -art is what makes me happy and which satisfies my soul. My interests also comprehend free education and the revaluation of ancient.

The artist was born in 1986 in Chile which at that time respired the military dictatorship. The comet Halley was the year’s protagonist. The artist’s childhood was immersed, marked by her developing an imaginary full of questions and particular curiosities which the family still remembers. At home, there always existed a sewing machine, tools and materials which every day were used for creating and for resolving every-day matters. Nature and the mistakes of human progress were recurrent in the artist’s early observation of what was going on in her country.

Generally, arts is considered a subject different from the other subjects which figure in the scholar curriculum. It is considered to be pleasant and less academic than the others. However, when the artist lived in this panorama of artistic education, her curiosity always led her to experiment and create with what was near her. In her first artwork in college, when she had to made a replica of a contemporary artist’s work and chose Joan Miro and his work “The moon and the bird (La luna y el pájaro)”, she managed to create something distant from the original work but in which in a peculiar way remained its essence. This was the starting point for the artistic production. Later, thanks to academic studies and personal investigation the artist understand, develop and conceptualize in what she names “that the key lies in creating, creating and die creating”.In this way, talent can be developed, polished, smashed and revived.

The techniques with and on which she works are painting, printing and mixed techniques; she es about to include screen printing into her visual repertoire.

The artist has participated in the National Contest of Young Art in the University of Valparaiso and was selected from over 500 participants. Her work was published in national newspapers such as “El Ciudadano”, in regional newspapers such as “El Trabajo” and on virtual platforms. A few months ago, “Le Monde Dilpomatique” began to use some of her paintings as illustration for the Chilean edition. The artist’s work has permanated in the underground, but is slowly beginning to be shown in various digital displays and hopefully will find it’s way to a gallery soon.

The purpose of this project is to introduce its readership to a diverse collection of art that is being produced at the national and international level. Our goal is to engage the public with information regarding a wide array of creative processes, and present the successes and failures that artists face from day to day. The collaborators hope that this project will become a source for exploring and experiencing contemporary art in all its forms.
View all posts by 365Artists/365Days →
This entry was posted in mixed media and tagged Arts, Chile, Latin America, Ma. Antontieta Cortez Cataldo, mixed techniques. Bookmark the permalink.