I am photographer playing with pain who sometimes experiment with video.

I’ve never been interested in art. Only by writing. I made the mistake of studying psychology in college. That lost me many years. That has not taught me anything for my life. In the final year I discovered photography. I started doing photography in theaters for a magazine. Bad things happened and I felt so so sad, so I started to take more and more pictures. It’s been terrible things in my life; I guess that is why my work is not a circus (I mean the funny way).

I have not a study. I’ve never had. I used to work in the streets, taking pictures. Then at home or in a bar by editing, writing. Now I only take pictures at home. In the corridor of my house. I would love to have a study; but in Madrid the spaces are quite expensive; and I need a space with natural light, not a sewer.

I don’t know if you mean it, but one of the weird things for me is to see a stranger staring at my pictures. About my work, I’m not doing anything I’m surprised. I don’t know if this is good or bad, but what I’m feeling it’s what I’m doing; so it seems quite natural and I’m not fulfilling a role that is foreign to me.

I usually take pictures in the periods when I’m sad. When I’m really sad it is when I invite a lot of people home to take their photograph; but every day I try to do something. Work for me is not just be taking or editing photographs;I am also working to send my calls, attending e-mails or study just what is happening.

I’ve only been taking photographs 3 years. Before I was taking photograph in black and white, girls in middle of the street. I thought it was fine. Now I find it an immature work. I think my work now is more accurate, more mature than the last. However, I have the feeling that this is going to happen constantly, and I’m start thinking how wrong I am now thinking that my current work is mature, when in two years will seem like a child’s play. 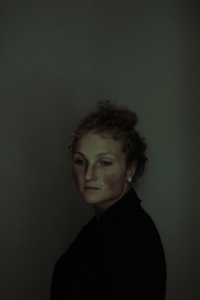 I work on my experience. But it’s all pretty intuitive. The past is what makes my job. I really like the work of Iché Veru (photo), Sally Mann (pictured), Silvia Grav (photo), Haneke (cinema) and Angélica Liddell (theater). They are my reference as to how to bring an idea to action, but do not try to acquire an aesthetic or similar.

I always wanted to be a writer. I have a blog. But I do not take it as seriously as photography; I mean you do not spend so many hours to write. Just I do not know how. The psychology was a mistake. I finished career, I could formally say I’m a psychologist. But I do not feel it. I’m interested in theatrical lighting. I’m trying to work on it now. And I just want to continue creating pictures and video..

My interest stems from the need to express myself and approach what I do not understand.

The purpose of this project is to introduce its readership to a diverse collection of art that is being produced at the national and international level. Our goal is to engage the public with information regarding a wide array of creative processes, and present the successes and failures that artists face from day to day. The collaborators hope that this project will become a source for exploring and experiencing contemporary art in all its forms.
View all posts by 365Artists/365Days →
This entry was posted in Photography and tagged Madrid, photography, portraits, saudade, spain, virginiarota. Bookmark the permalink.