One thing that perhaps defines my work is materials and emotional depth with socio- political undertones. It’s evident that I use methods similar to confessional and conceptual models of contemporary art. Yet my work is charged with provocative irreverence and fragility, accessible to everyone. In short, existential anxiety …. with a bit of playful cruelty.

Some work is also political (Social Files) bringing into play social fragmentation with factual events, such as homelessness. Right now we are in major global crises with uncontrolled ‘consumerisation’ of everything and in Britain this has culminated with neo-conservative radical eradication and demonisation policies of the working classes and the poor. These are dangerous times in this respect and, at present, are vastly under-represented within the visual arts.

A few unconventional mediums keep resurfacing in my sculpture; plasticine, tar, chocolate, fat, sheep’s hearts, hairs, discarded cans,tins etc. With unusual props in my ongoing photographic project Family Portrait. In this series the fact that the medium is photography and the genre is portraiture allows me to bring an extra psychological sensibility between the model, the surroundings and image that is difficult to achieve in sculpture. Lets call it subjective intimacy.

I was born in Mozambique in Southern Africa and came to Britain as a young adult where I studied Fine Art at Central St Martins College of Art and later Conceptual Anthropology at University College London. I have lived in London ever since while trips abroad have inspired my much of my work.

There have been two major events in my life that changed the course of things.

The first was war, and the reason I left Mozambique.

The second was cancer. I was quite young when I had it the first time. Every now and again it reappears. That definitely slows down my pace of life. Survivor’s instinct has a habit of kicking in. Does it influence my work? Sure it does, but never the ‘reason d’etre’.

The studio is a contained vessel of energy. In my case however this is a dynamic I had to change and contemporise to my needs.

For the last three years I live in the studio. Actually the studio lives with me. It can get complicated because some of the mediums I use are smelly and a bit poisonous. A lot of planing is needed.
I miss the journey to the studio, something I’ve replaced with a morning walk in the local park. It allows me time to plan and in my head change the organics of the house into ‘the studio’; architectural role play. Discipline is something I had to resolve, since my messy studio became somewhat of an evolutionary organism. Morphing to circumstance isn’t all that bad, merely a different process I had to adapt to.

The artist’s perennial artist’s dilemma; admin, budgeting, promoting etc. Budgeting for new pieces is something I started to do from the beginning as well. Artist like me use a lot of different materials, and it can easily become expensive and impossible to accomplish if not well planned.

This is largely dictated by what medium I am working on. I find that some work is best to start quite early on and some when life calms down and the night sets in.

With the photographic project for example I am dependent on day light, models’ availability etc. Whereas with post production I work mostly at night.

Sculpture, especially in the technical stage, definitely during the day.

My working patterns are probably similar to most artists; long hours!

I am in a pretty good phase right now. Everything seems to mould itself in an articulate way. The tread is there and even though my work diverges in many routes it finds it’s language; visual language that is.

Five years ago I became disillusioned; a kind of artist’s writer’s block? I stopped art all together for a few years. Although coming back was difficult and for a while I felt completely lost, the absence and subsequent return helped me to structure my thoughts and arrive at where I am now.

In many ways I am a visual story teller, so I like to listen to podcasts when I work. Long stories with lots of plots. This can be seen in the way I deal with plots in the Family Portrait narrative series and previously with my drawing phase.

I’ve also been engaging with pre-20th century artists. For my current photography project, Rembrandt’s understanding of the ‘gaze’ in his portraiture pieces. On the other hand, Goya’s emphasis on narrative in his later black period, Los Caprichos, witches etchings, etc are also visible influences in my work.

Louise Bourgeois finds her way into my work as well. We will never know if she was raving mad. Madness is lucidity anyway. I think she is one of the most important artists of all time. Everything contained in emotion; genius.

I was thinking about it the other day, and I guess if I’m really honest with myself I don’t know how to do anything else.

I live in London, a busy city with a lot of cultural choices and this is one of the perks I am lucky to have. Yet nature is the oxygen of the soul, therefore I diverge every now and again into the country side to breathe fresh air.

Mars Gomes was born in Mozambique and moved to Britain as a young adult. As a student she won the student drawing competition in Kent Institute of Art. Studied Fine Art at Central St Martins and Anthropology at University College London and was awarded scholarship for the Syracuse University (USA) exchange program.

Represented by Act de Naissance (France) during the 90’s, exhibiting her work in Britain and Europe. She was also selected for the acclaimed international feminist photographic exhibition What She Wants (1994).

During 2000/02 Mars Gomes set up the Studio Voltaire gallery in London, producing and curating events and group shows such as the open submission Everybody is an Artist, international group exhibitions and annual community art festivals . In 2006 Mars Gomes moved to Berlin where she set up a studio and produced work for the exhibition Berlin Works/ Berlin Arbiten.  In 2012 Mars Gomes was commissioned by LeeFest for a public art commission in east London. During this year she also partly curated and exhibited in the first, of the now well established London annual open, Bad Behaviour. In 2015 she was selected for the New Directions#1 contemporary art books editions by Exhibooks publishers,UK to be launched in September 2015. 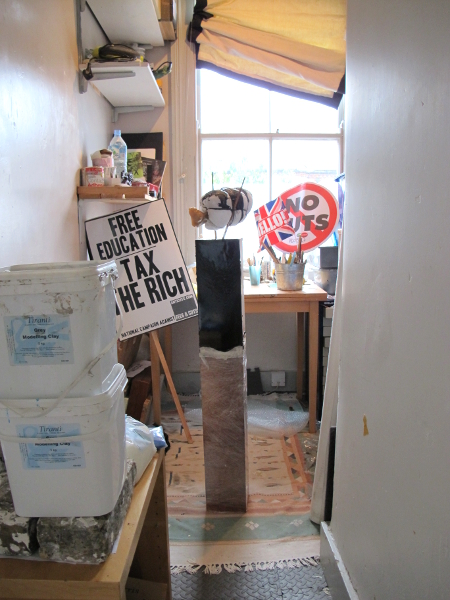 The purpose of this project is to introduce its readership to a diverse collection of art that is being produced at the national and international level. Our goal is to engage the public with information regarding a wide array of creative processes, and present the successes and failures that artists face from day to day. The collaborators hope that this project will become a source for exploring and experiencing contemporary art in all its forms.
View all posts by 365Artists/365Days →
This entry was posted in Photography, Sculpture and tagged Confessional Art, Goya, London, portrait, sculpture, United Kingdom. Bookmark the permalink.