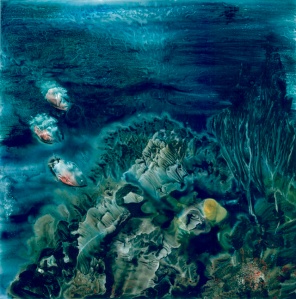 I am a painter and printmaker, responding to the ocean, my muse. The underwater landscape and the shoreline, in watercolor on Yupo (polypropylene), have been the focus of my work for the past three or four years. It is an ode to the glories of the sea, while hinting at its fragile future.

The flora and fauna that I have explored as a SCUBA diver, and the experience of being in that flow, is what I seek to share in my painting. As that world has come under increasing attack – 40% of the coral reef is now damaged – I have sought ways to respond in my art. I’d been a political activist for many years, beginning with the Vietnam War, but sought refuge from the world’s troubles in my art. When the BP oil spill in the Gulf of Mexico happened five years ago, I understood that I could no longer separate my two worlds.  Integrating them has been harder than I imagined. I am not a conceptual artist, and I have no interest in creating heavy-handed propaganda. The challenge was pointed out to me by the artist Heidi Fasnacht, who suggested that I would have to change my artistic persona to address the oil spill in my work. She said I would need to transform my perspective from protector of the environment to destroyer. I’ve been working on it for five years now. 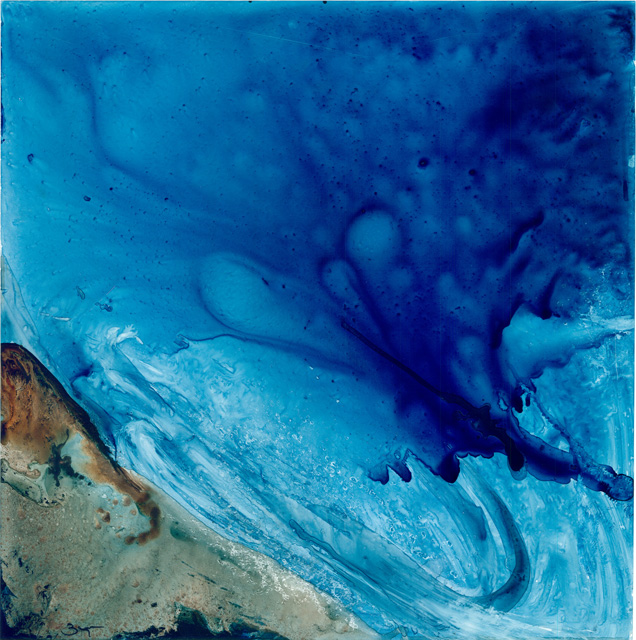 The beach and its environs is my real studio. That is where much of my best work has been made, and certainly found its inspiration. Several years ago I had a residency at a historic dune shack in Provincetown, Mass. It was just me and the coyotes (heard, but not seen) for a week in a shack in the dunes, and the experience was transformative. After many years of pleine aire painting, I spent a month in a studio at another residency, the Vermont Studio Center. Working ten hours a day for a month in that wonderful space convinced me that I needed to find a studio other when I got home to Boston, which I did. I still prefer to work outside – and fortunately my studio does have a covered porch. But as my materials have become  more complicated, and my joints have gotten a little stiffer – I find that I rely increasingly on my studio’s large flat tables  and many tools.  Shelter from wind and rain is another reason I am grateful to work indoors, though some of my most interesting work was painted in the dunes, literally weathered with raindrops and sand.

Webmaster! That’s been a big learning curve, but I’m grateful to have learned it. I hadn’t realized that other skills/roles that are more comfortable for me would also be utilized, such as writer, press agent, marketer, networker, and all round public relations specialist. People who know I’ve been a teacher assume that I teach/taught art, but I have had absolutely no interest. This is MY time, to make MY work.

I am a morning person, and on the two days a week that I set aside to work in my studio during most of the year I try to begin work first thing. I have the illusion that I can fit it in between other parts of life on other days, but in fact that rarely happens. So I try to clear the decks on Mondays and Tuesdays. Feeling guilty that I don’t work more, my friend the painter Lisa Goren pointed out that my work  has a yearly rhythm to it, and she’s right. In summer, when I am able to spend big chunks of time at the shore, in Truro, Mass., on the outer tip of Cape Cod, I work intensively and productively, painting in the dunes by day, and at night working on a basement ping pong table. The times when I have had residencies – with no distractions and life’s essentials provided for –  have been my most productive. So last year when I needed to develop a body of work for a big show, I decided to give myself a residency in my own studio. It worked! Most of the pieces for the show WHAT REMAINS at The Copley Society of Art which closed June 24th, were done during that intensive process (the work can be seen on my website www.ginnyzanger.com in the WHAT REMAINS gallery). 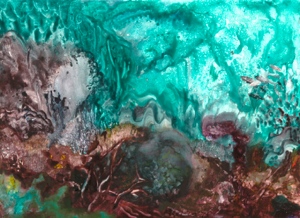 I have continued a love affair with watercolor throughout my career. The magic of colors combining spontaneously in water continues to draw me into its spell. But the way that I work with watercolor has changed dramatically due to the influences of my printmaking experiences and adopting Yupo as my paper.  I learned to make monotypes using oil-based etching inks because of the vibrancy of the colors, and later worked with watercolor. The impact on my painting of making monotypes has been the use of various techniques to create texturing. Removing ink from a monoprint plate with sponges, bubble wrap, Q tips, leaves, foam brushes or whatever else I find are all processes that I now use with watercolor on Yupo. Yupo has also allowed the liquidity of watercolor to express itself in new and interesting ways: I spray, pour, wipe, and tilt the paper, and use surface tension when I apply another sheet of Yupo and slowly peel it back. This latter technique, which I discovered on my own, turns out to have a rich history in the annals of European art. Known as decalcomanie, and invented in the eighteenth century for the ceramics industry, it was more recently used in the last century by Surrealist painters such as Max Ernst, who used it to uncover the subconscious. I use it to create evocative organic effects.

Having skipped art school, I owe so much to the teachers and mentors I have studied with: Rhoda Rosenberg, Robert Siegelman, Richard Raiselis, Joel Janowitz, Anne Neely, and Lois Tarlow. I had the good fortune to take the last week-long workshop by Michael Mazur before he died, and his drippy paintings and prints have influenced my work. Exhibits, interviews, and talks by Mark Bradford have inspired me to pursue a scary process that is guided more by the media I use than by me. My partner in art, Donna Hamil Talman, and the group of artists who meet regularly in Jamaica Plain Mass. are invaluable sources of support and ideas.

My art training began early – classes at the Metropolitan Museum of Art when I was 5 followed by studies at The Art Students League as a teen-ager – but took a long hiatus when I lacked the courage to turn down admission to Harvard (no studio art program). I then got side-tracked for many years. I’d lived with a family and completed high school in Argentina, and that experience inspired a career in bilingual education and advocacy for immigrant students, during which I taught at all levels, earned a doctorate, wrote books, made videos, trained teachers, and did award-winning research. I then became a museologist, serving as vice president at Boston Children’s Museum for 13 years. As the art-making that I had squeezed into vacations and evenings became a more important part of my life,  I gradually shifted the balance, so that the education work that I still do is finally is subsumed by the art.

Ginny Zanger lives and works in Boston and on Cape Cod. She uses water media in innovative ways  to create underwater landscapes and other works on paper that flow from her passion for the environment. Her work is in private collections throughout the United States and abroad, in the corporate collection of Keybank North, and in colleges and non-profit organizations in Greater Boston.  Zanger has been awarded residencies at Vermont Studio Center and the Provincelands dune shacks. Her work was the featured centerfold in Artscope magazine. After only two years, she was awarded Copley Artist status at the Copley Society in Boston, the oldest artist cooperative in America, where she and Donna Hamil Talman had a well-reviewed two-woman show this spring, What Remains. She exhibits widely throughout the Northeast and is represented this season by the Cove Gallery in Chatham and Wellfleet, Mass. 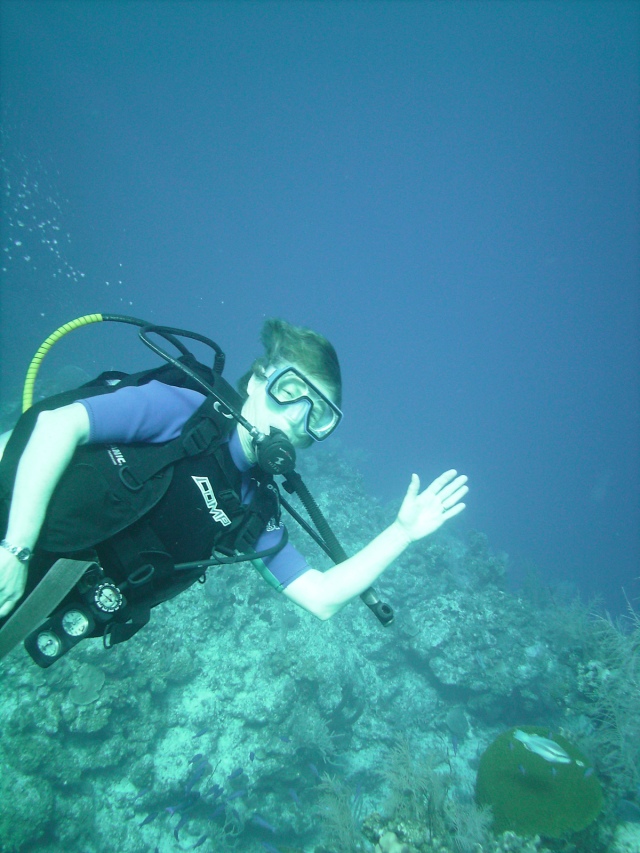 The purpose of this project is to introduce its readership to a diverse collection of art that is being produced at the national and international level. Our goal is to engage the public with information regarding a wide array of creative processes, and present the successes and failures that artists face from day to day. The collaborators hope that this project will become a source for exploring and experiencing contemporary art in all its forms.
View all posts by 365Artists/365Days →
This entry was posted in Painting and tagged Cape Cod, coral reef, environmental art, underwater landscapes, Yupo. Bookmark the permalink.