I am an interdisciplinary and cross-media performance artist from Porto, Portugal.
I believe that art should reach out to all persons. Thinking about this and the Capitalistic society and commercial world that we live in, I created my on-going performance project “Work For Free,” in which I offer myself to work for free creating any artwork that the public desires. This performance action is a social gift in which a work of art is fashioned especially for the person that interacts with the performance. This free artwork can be chosen from a pool of different mediums such as: e-mail art, digital photo, web art, digital drawing, decollage, among others. Until now, this Project has been done in different countries and venues such as New York, Macy Gallery and in Greece at the Biennial of Thessaloniki, and I created up to now a total of 183 free works of art customized for the active audience.

I believe that art can bring change to the persons that are touched by it and then these persons change the world. Activism is a practice that is always present in my artwork and Projects. An example of this is my recent performance/installation on-going project called Crisis of Luck, as a response to the crisis in Portugal and Europe, where I presented myself as an oracle-priestess who foretells and responds to questions asked pertaining to the crisis that we live with, and provides a solution to problems. From this premise, I created an installation in the space using 3D sculpture, photo, video and food in which the public was invited to enter and interact with me as a performer, and I responded to their problems and misfortunes. I became an oracle that answered all questions for the audience in three forms: verbally, in written form and via the gift of a customized cake made for each person.

I remember that I was a child in Portugal when the dictatorship had just ended, and I saw a performance from a Portuguese artist that I know now as Albuquerque Mendes. I remember thinking until that moment that art was defined by embodiment in a physical object such as with painting and sculpture and nothing else. But on this first encounter, I remember when I entered the space and saw the crowd watching a person do movements with dust and fire, I was fascinated. I turned to my mother and asked, “What is this?” And she replied “It is art. It is a performance.”

The concept of the studio exists first in my head and my mind, and the ideas and conceptualization of a performance or artwork can happen there anytime, anywhere. The manifestation of the art piece happens in an organic way and depending upon the medium, I might use different spaces or studios. For example, in the project “Happy Birthday Mr. President”, I nurtured the idea, concepts, material need, etc, in my “studio mind.” For the performance in April 2015 at Rooster Gallery entitled Bathroom Project (NYC), I created previously in a ceramic studio all the pieces used on site such as a toothbrush, soap, comb, lipstick, and cup. In the New Media Studio at Columbia University I took the photos of my underwear and printed them. As also in this studio I scanned and 3D printed my own figure, as a mimic of the action of the performance that I was going to perform. Then, all the work came together when I performed it during four hours in the gallery bathroom were the public could interact with me. At this time, a surveillance camera was showing what was happening in the bathroom in the Gallery entrance through a monitor. The studio that connected all these ideas and mediums was what I call the “studio or office mind”.

I envisioned no roles.

Anytime is good since my “office” is inside my mind and I work there 24/7.
My inspiration comes from everyday life and the office is in my head, so I am always creating and developing projects wherever I am physically. My process continues after the initial inspiration and by creating 2-D forms through writing, drawing, sketches and photos of the project. Then I transform it into 3-D forms such as mockups or even 3-D printed sculptures which then become an installation in which I perform in it. I believe that the body is what gives identity and through the body, performance appears. Performance is an extension of the body. The extension of the performance is 3-D sculpture, photography or video, and an extension of this is installation.

I believe that all men and women are equal and deserve the same opportunities and rights. In this way feminism always plays a role in my performances.
However, before 2005, I created performance pieces that addressed the gap or lack of equal rights between men and women, the condition and discrimination of women in relation with men. At this time I was living in Portugal and I could see the lack of opportunities and discrimination that women were suffering from, for example in the job/work force. Once, I saw an ad asking for a white man (computer trouble shooting) for one job and a woman for another (secretary). So I was developing themes in my artwork and performances related to the environment and daily life that I experienced. In 2005, I went to pursue an MFA at The School of the Art Institute of Chicago (SAIC), and this was my first contact with the USA. This lead me to explore different themes in my performances (2005-2015) as it was such a shock coming from a socialist society to be confronted with a capitalist society. However, this old theme has recently reemerged in my art practice within the project “Happy Birthday Mr. President”, that is a nod to Marilyn Monroe’s famous 1962 address to President Kennedy at a fundraising gala for the Democratic Party at Madison Square Garden.

I believe that the sum of my historical, societal, cultural and national background that has impacted my artwork and beliefs. I suffer from different influences and I embrace all of them to the extent that I cherish them and I reference them, almost as citations within the context of my artwork. For example, in my video-performance “VI” (2013) I was influenced by the same movement in a rubber-women (Freak shows) and influenced by the Fluxfilm Nº28: Wrist Trick and Unrolling Event by Paul Sharits États-Unis (1965). Another example is the video-art “After Yoko Ono Bottoms…BUTt”. This video-performance explores the repetition of the same movement in male bodies with 3 different skin colors (white, brown and black). The body movements were influenced by Yoko Ono´s film “Bottoms or No. 4” (1966).  I can continue on and on, for example, in my performance “Love me Tender” that was a collaboration piece with Albuquerque Mendes performed at Festival Trama, Serralves Museum, Porto, Portugal in 2010, we were influenced by the Elvis Presley song, “Love me Tender” (1956).

It is not a choice. I was born this way. Creating is like breathing and I need both to survive. 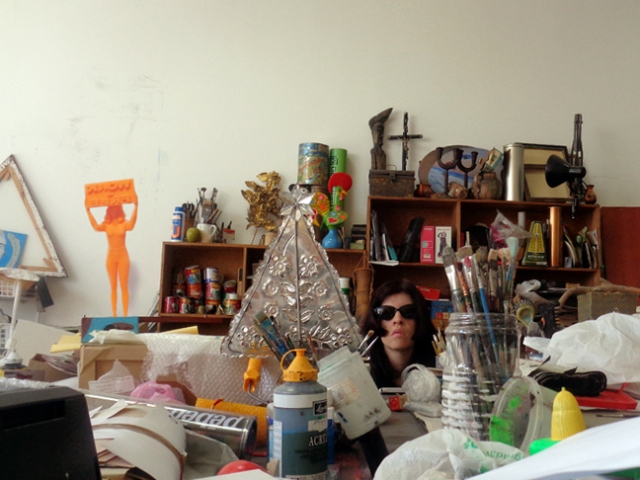 The purpose of this project is to introduce its readership to a diverse collection of art that is being produced at the national and international level. Our goal is to engage the public with information regarding a wide array of creative processes, and present the successes and failures that artists face from day to day. The collaborators hope that this project will become a source for exploring and experiencing contemporary art in all its forms.
View all posts by 365Artists/365Days →
This entry was posted in Performance and tagged Albuquerque, Art, Beatriz, Performance, Portugal. Bookmark the permalink.