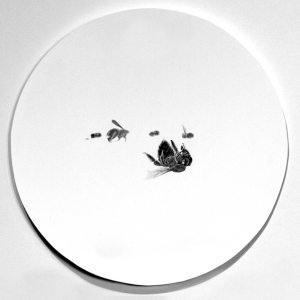 My most recent work, Symbiotic Crisis, explores the vulnerability of the honeybee and its ancillary impact on our environment, economy, and food sources. One-third of the crops we eat are supported by pollination from honeybees. This is to include direct consumables such as fruits, vegetables, and nuts and indirectly in the crops that are grown in the production of meat and dairy products. The role of the honeybee is so integral to crop propagation that bees are transported by trucks to farmlands in need of pollination. Though studies have been conducted, causes of these bee declines are not yet definitive.

My work considers our relationship with the environment and the impact bees have on our food sources. I draw on food tins and repurposed materials. Initially, the drawings were presented inside a box truck to imitate the transportation of bees to areas where bee populations have declined. I continue to make drawings for the installations and show them at a variety of venues. Though the appearance and quantity of drawings is somewhat mechanized, each one is unique and handmade from collected source materials. The elemental approach reflects simpler methodologies and examines a more direct and intimate relationship with our environment.

I grew up in a rural area of North San Diego County where most of the land was covered with avocado and citrus groves, and a lot of horse property. When we first moved, there was a post office and one stop sign. It doesn’t look like that anymore. I spent a lot of time on my horse, riding over miles and miles of trails and occasionally swiping oranges and tangerines for my horse and me. Like most people, we had fruit trees on the property and a backyard garden, also. I have fond memories of waking up in the morning and going outside to pick fruit off the trees for breakfast. After a brief stay in Long Beach for college, I landed in Ventura County, another area rich in agriculture. When I think about how I grew up, it makes sense that my work would center around food and agriculture. 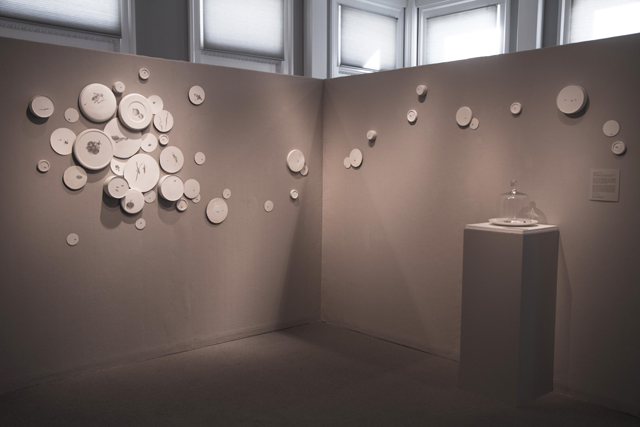 The concept of the artist studio has a broad range of meanings in contemporary practice. Artists may spend much of their time in the actual studio, or they may spend very little time in it. Tell us about your individual studio practice and how it differs from or is the same as traditional notions of “being in the studio”.

I would say that I have a primarily traditional studio practice. I collect specimens for my drawings outside and generally work from what I have in the backyard these days, with the occasional “gift” from friends and family. I also draw and photograph outdoors for compositional studies and then take my references into a converted space in my home, thus the studio, to complete the work.

In school, I had heard all about the amount of time artists spend looking for opportunities, writing grants, and managing the business of art. It is true. I just didn’t realize how much time would be spent in supporting the work. It is challenging to balance the business and the production aspects of art making, but I have found that I have learned a lot in doing the research components.

I have an active four-year-old daughter, so I work when I am able. I often wake up early in the morning before anyone is awake to do things that require thinking and quiet which is generally the drawing. We also share studio time. When I have tasks that require slightly less focus, like preparing surfaces, we work together. She has her own drawers in the studio for her supplies. Because I am a teacher, I also have the benefit of extra studio time during the summer months. 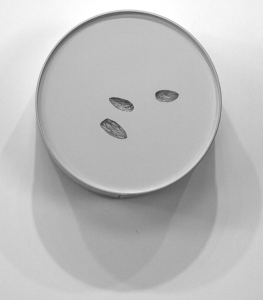 Stylistically, my work is similar. However, in 2014 I started a project called Symbiotic Crisis where I began making drawings on metal and installing them in varying clusters or swarms. The first three of these installations were presented in a box truck that I parked at different locations and I have continued to show them in brick and mortar locales. Working with installation has given me the opportunity to do things like suspend and overlap drawings in a way I certainly never imagined doing before. I also get to play with reflections cast from the back of the drawings that are copper or painted metal.

Early on, writers like Michael Pollan and Marion Nestle had an impact my work. Even the writings of chef Thomas Keller and farmer Joel Salatin resonated with me. Much of their attitude relates to quality food and the communal experience. Although my studio work is solitary, it is certainly inspired by all that happens outside the studio. Invigorating discussions about art with my peers, visiting galleries, even working in the garden all influence what is made, even if it merely creates space and time for ideas to be resolved.

Before going to college, I was very involved in the equestrian sport of dressage. There came a time when one of my trainers offered to team up. I would learn the business practices of running a training stable and would also take over the lower level riders. It has been years since I have ridden horses. I opted to finish traditional schooling and finished my Bachelor’s and Master’s through the Cal State schools. I think I was supposed to teach, something, and I am very fortunate to work with high school students making art everyday. My other interests ebb and flow with family. Cooking, gardening, hiking, camping, and traveling are all things that make up my spare time.

Terry Arena was born in Georgia, but has spent most of her life in Southern California. In 2009, she received her MA in Painting at California State University, Northridge. Recently, Arena’s work has been shown at the Museum of Art & History in Lancaster, CA and at the Carnegie Art Museum in Oxnard, CA. She also held a series of mobile installations housed in a box truck this past fall. In addition, she has had three solo shows of her graphite still life renderings at Sinclair College, OH, Ventura College, CA and Moorpark College, CA. Her work has been included in various group exhibits such as Sweet Subversives: Contemporary California Drawings at the Long Beach Museum of Art, Long Beach, CA, City and Self at Red Pipe Gallery in Chinatown, Los Angeles, CA, and Chain Letter at Shoshana Wayne Gallery in Santa Monica, CA. Arena currently lives and works in Ventura, CA.

The purpose of this project is to introduce its readership to a diverse collection of art that is being produced at the national and international level. Our goal is to engage the public with information regarding a wide array of creative processes, and present the successes and failures that artists face from day to day. The collaborators hope that this project will become a source for exploring and experiencing contemporary art in all its forms.
View all posts by 365Artists/365Days →
This entry was posted in Drawing, Installation and tagged art truck, colony collapse disorder, Drawing, Graphite, Installation, Los Angeles, Ventura. Bookmark the permalink.