I’m mostly into experimental abstract photography (photograms, cyanotypes, and other alternative processes) as well as still life and environmental photography, both film and digital. Things Merging and Falling Apart, which is my main project, consists of a few dozens of unique type C contact prints (photograms) created in a color darkroom using long exposures. My interest in cameraless photography originally came from a desire to capture a movement of fragile organic objects caught on a light-sensitive surface. One of my inspirations was to watch the making of precious sand mandalas that take days of intense labor and, once completed, are destroyed without any regrets as a symbol of impermanence.

The latest series that’s still in progress is called Six Hours. It includes large multiple-exposure photographs of slowly melting bodies of ice that can be viewed as meditations on color and shape or a climate change statement.

Where do I start… Nobody in my family has ever been an artist or a writer or any kind of creative; I guess I was a bit of a rebel when I dropped out from IT program to pursue photography and get a BFA. Though both of my parents are scientists so I can relate to the spirit of discovery. I think it’s important to stay curious and open-minded, like a child, and also humble, acknowledging the vast amount of things we don’t know. I suppose you can look at my process as one big experiment with paper imprints being final results. Oh, and probably half of them get trashed.

Growing up during the collapse of the USSR when most of the people, including my family, had very limited means and lived from day to day, as well as moving around later on, hopefully made me more appreciative, but also I’ve always been a wonderer so I actually enjoy the change of environment. My work is not directly attached to any particular place, identity, or political agenda. If anything, I’m interested in the line between personal freedom and personal responsibility.

I don’t have a studio in a traditional sense. Usually, I gather materials (sand, water, plants, rocks, etc.) from various natural sites and then experiment by arranging them on glass plates or in glass tanks filled with water that serve as my negatives. Most of the work happens in the darkroom where I have to manipulate the composition and expose the paper. When working with color film and paper, it has to be pitched black as opposed to a b&w that allows red safelight, which makes it a bit challenging but also fun. Every time I have to shoot something in a studio, I either set up backdrops in my living room, or rent a space, or shoot outside, depending on the conditions.

Recently, there was a great article published in The Atlantic called The Death of the Artist—and the Birth of the Creative Entrepreneur. I feel like everyone right now, whether or not they have a certain degree of success and representation, has to wear multiple hats and be an accountant, web designer, promoter, social media guru… Oh yeah, and make and exhibit work.

I usually go through periods when I work on a specific project for 12 hours a day for maybe a week, and then take a break for a few days. Also, no matter whether of not particular work is classified as “conceptual”, all art requires a lot of observation and reflection so just because something isn’t manifested physically, it doesn’t mean the work isn’t happening.

I think that I’m still going roughly in the same direction but my esthetic has definitely evolved. I’m more self-aware in terms of how I work, what draws me towards something, how I make decisions, and so on. During that time, I started two new projects, and though visually they might look different, for me they feel very much related to everything I’ve done previously.

Well unless you live in a cave everything affects you, directly or not. I don’t buy the whole notion of originality, for me art is a way of translation and interpretation of experience, individual or collective. In my case, my meditation and yoga practice has a great influence on the type of work I make, and vice versa.

Being able to spend time large amounts of time making art is an honor and a luxury. While I do know a few people who work in a studio 40+ hours a week, most of the artists either teach or write or pursue some other paths, simply because they need a certain degree of financial stability or can’t exist in a tiny bubble. For me, my work for non-profits and media has been very rewarding, and hopefully I’ll be able to continue with it. 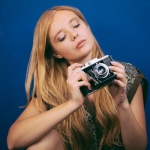 Tatiana is a Russian-born fine art photographer. She employs both digital technology and traditional darkroom equipment, as well as video and mixed media. Since her graduation from the Maryland Institute College of Art (MICA) in 2011, her work has been published in a number of magazines such as the British Journal of Photography, Wired, Harper’s Magazine, The Week, Juxtapoz Magazine, and exhibited nationally and internationally. In 2014, she was named one of the 30 Under 30 Women Photographers by Photo Boîte Agency and 30 Photographers Under 30 to Watch by Complex Magazine.

The purpose of this project is to introduce its readership to a diverse collection of art that is being produced at the national and international level. Our goal is to engage the public with information regarding a wide array of creative processes, and present the successes and failures that artists face from day to day. The collaborators hope that this project will become a source for exploring and experiencing contemporary art in all its forms.
View all posts by 365Artists/365Days →
This entry was posted in Photography and tagged color abstraction, photogram, photography, process art, Tatiana Gulenkina. Bookmark the permalink.