I look at how we shape reality through mediation. This can be as simple as looking at how the process of perception translates the world into an artwork to how I create surreal 3D animation video situations with The Yes Men, Second Front, and the Haymarket Riot Collective. Basically, this means that I work in whatever medium that’s appropriate (like Duchamp), but my modus operandi is pretty consistent.

Wow. That’s interesting, as I’m largely self-taught and went to art school AFTER being in half the major biennials. My mom was an artist and intellectual, and she raised me in front of a loom, making glass, painting, or watching Star Trek. I didn’t know whether I wanted to be an artist or in movie special effects, but when my folks got me my first personal computer, they pressured me to be an engineer. I did that for a few years, fell in love with my first wife, and went to work in the Glass Department in the Neon Shop at Kent State for peanuts. After that, I did a lot of design, learned the art ropes on my own, and started getting press in New Media. However, when I thought about ‘going academic’, I went to grad school for Virtual Reality, Physical Computing, and Fabrication. 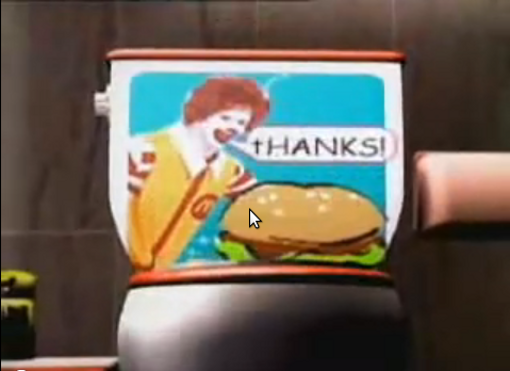 Still from Reburger intervention (from the movie, The Yes Men), Video, dimensions vary, 2003

I never had a separate studio until 2013 when UW Milwaukee gave me one, and it took me a year to get out of my apartment as workspace and start using my studio. A lot of this had to do with my largely being a media artist until grad school because I had to worry about space. Then I got a large format printer and fabricated huge tapestries as well as using robots to make 10’x20’ paintings, which caused me to need some space to just see the work.

Curator, theorist (see later, I saw that one coming), performance artist, and using my engineering in my art when using microcontrollers/physical computing. The mentorship thing is strange, because although I have a good record, I’m far from driving the Lexus.

There are two times when I make art; one more exciting than the other. The uninspired time is, you know, like 10 AM to 6 PM – very corporate, set up the list, get through your priorities, that sort of thing. The other is when my prefrontal cortex is on fire and I have to do something or else I’m going to go on about it until I do it.

I think my work has gotten more about drawing on my previous work or things that interest me than trying to be hip. I was having dinner with Mendi and Keith Obadike one night and we agreed that it’s good to be part of the ‘conversation’, especially when you’re young, but there’s a point where fashion is a series of blips on the radar and you just have to do your thing.

Formally, I’ve gotten far more interested in fabrication as a way to streamline my thought-to-project time. That’s why there’s a gutted CNC machine on my bed right now. I’m really interested in things that incorporate material and media at the same time, like Augmented Reality.

Well, my mother was an artist – enough said. My father and first wife were always asking when I was getting a real job until I gave Dad my invite to the Whitney Biennial when RTMark was there. But on the other hand, my ex and my best friend/first collaborator Jonathon Epstein (Haymarket Riot Collective) drove me to excellence and to actually be rigorous about my practice. Theory informs my work to the point where I consider myself a theorist who does art, except I would like to think my art is better than Baudrillard’s photography. One last one is when I became friends with many of the people in the existing parts of the NYC Fluxus community – Bibbe Hansen (Al Hansen’s daughter) and I sit in Second Life and drop pianos a lot in honor of her dad.

Sure. I started as an Electronic Engineer, but went into art when I found out Kandinsky left Law at 30. In the art genre, I curate and write a lot, as well as collect antique media equipment. Otherwise, I love to make music, I obsess about cats, dabble in foreign languages, learn everything I can wherever I can, and I bike a lot. 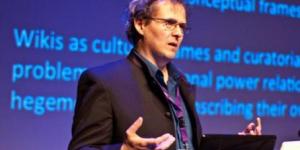 Patrick is a media “reality” artist, curator, and theorist of over two decades who explores how media and mediation affect our perception of reality. He is best known for his work as an Artistic Director of the virtual reality performance art group Second Front, and the animator of the activist group, The Yes Men. He is a CalArts/Herb Alpert Fellow and Whitney Biennial exhibitor as part of the collective RTMark. He has presented and exhibited internationally at numerous biennials and triennials (Yokohama, Venice, Performa, Maribor, Turin, Sundance), and conferences (ISEA, SIGGRAPH, Popular Culture Association, SLSA, SxSW). He is also Editor-in-Chief of Intelligent Agent Magazine, and a writer for the RealityAugmented blog. His recent book, “Variant Analyses: Interrogations of New Media Culture” was released by the Institute for Networked Culture, and is included in the Oxford Handbook of Virtuality. 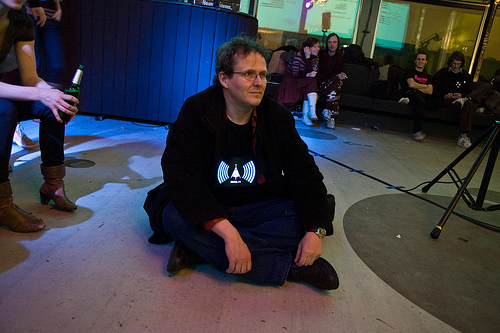 The purpose of this project is to introduce its readership to a diverse collection of art that is being produced at the national and international level. Our goal is to engage the public with information regarding a wide array of creative processes, and present the successes and failures that artists face from day to day. The collaborators hope that this project will become a source for exploring and experiencing contemporary art in all its forms.
View all posts by 365Artists/365Days →
This entry was posted in New Media and tagged AR, Chicago, Fluxus, new media, VR. Bookmark the permalink.