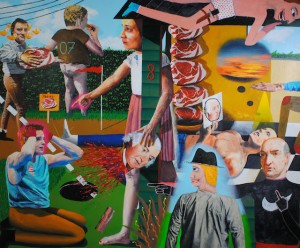 Enigmatic narrative paintings, if I’m being as brief as possible. But, a little less brief, my paintings are imagined situations or struggles dealing with the nature of meaning and knowledge, which simultaneously navigate the possibilities and place of fiction and narrative in painting.

My Mom is a great draftswoman and designer and both my parents are hard workers and have instilled a Midwestern work ethic in me, as all good parents should. But I think in the end it comes down to one’s own predilections and dispositions, along with the way one deals with all the stuff they encounter and how one assesses and makes meaning from those dealings. So, basically, in having a middle class suburban upbringing with its normalcy and simplicity, of which I feel extremely lucky to have had, I learned that what I was more interested in dealing with was something strange and tough. That, in conjunction with an interest in reading (especially fiction), films, and a tendency to overthink things. But it’s hard to draw solid lines between past and present, so, my final answer is, I don’t know or no comment.

I spend most of my free time in the studio. Naturally a hiatus is needed from the studio from time to time (as with every other area in ones life) to be able to come back with a state of mind through which curiosities are explored in a meaningful way. But overall I think my studio practice is around a traditional notion of it. There’s an area I’ve designated for making things and I make things in that area as often as I can. However, one’s studio practice is like a subsection of one’s artistic practice, and if one’s artistic practice is lazy then their studio practice suffers. I think the artistic practice, besides the importance of one’s research, has to do with basically being present and thoughtful in one’s day-to-day experiences.

For me, daytime is the best. Sometimes it has to be whenever time allows, but right now more things end up working for me during the day. That’s something that, for most makers, changes a lot throughout a life of making I think. In school I mainly painted at night, then things changed and now I paint during the day, I wouldn’t be surprised to find myself as a night painter again, under different circumstances.

I started painting about five years ago, so without being a smart alec, the work exists now. But during that interval it’s changed completely. I think the first few years were basically working through influences, which is an awkward but necessary time in order for one to figure out what it is they’d like their work to be about. Then, in the last few years I started using oil paint instead of just house paint and that’s given me no end of new problems to solve. However, the general feeling in them is still the same, just more complicated now, which I realize sort of makes the point at which my paintings are, sound like affected teenagers.

The collection of all of those individuals and their specific impact on any artist’s work is a huge part of what any maker does. Friends and family are often great sources of encouragement, but hopefully also challenge you, teach you, and keep you in check. All artists build off of the work of every writer, philosopher, and artist, past or present, that is an influence to them in any way, just as they built off of their influences; trying to solve the same problems, or branches or versions of those problems, that they were or are.

Up until I was 18 I thought that being a professional baseball player would suit me fine, but around that time began to value school much more and found that painting suited me far better. Which, in retrospect, is fortuitous because I was likely a far more mediocre player than I perceived myself to be, and as such was bound for disappointment.

Samual Weinberg received his BFA from University of Wisconsin-Stout in 2013 and is now living and working in the Northern Warehouse Artists’ Co-op in Saint Paul, MN. Since graduating he has been showing in Saint Paul and Minneapolis, including two solo shows, and has been featured in Fresh Paint Magazine.

The purpose of this project is to introduce its readership to a diverse collection of art that is being produced at the national and international level. Our goal is to engage the public with information regarding a wide array of creative processes, and present the successes and failures that artists face from day to day. The collaborators hope that this project will become a source for exploring and experiencing contemporary art in all its forms.
View all posts by 365Artists/365Days →
This entry was posted in Painting and tagged Art, Baseball, fiction, narrative, Painting. Bookmark the permalink.