I create performance work in the form of storytelling, theatre, spoken word, comedy, solo shows, or performance art. I explore themes of feminism, body image issues, seeking joy, and addiction (to substances, to technology, and to ourselves). I am interested in finding humor in the hardship, promoting empathy, and examining violence in performance.

I was a theatre artist for many years and recently transitioned into the world of performance art and other forms of solo performance. Even so, I seek out collaboration and community, a result of my big family and a decade of organized sports. I love working with other people as part of a team, so many of my projects focus on fostering community and kinship. Most of my performances are autobiographical in some way, I am always drawing from my own life to create. 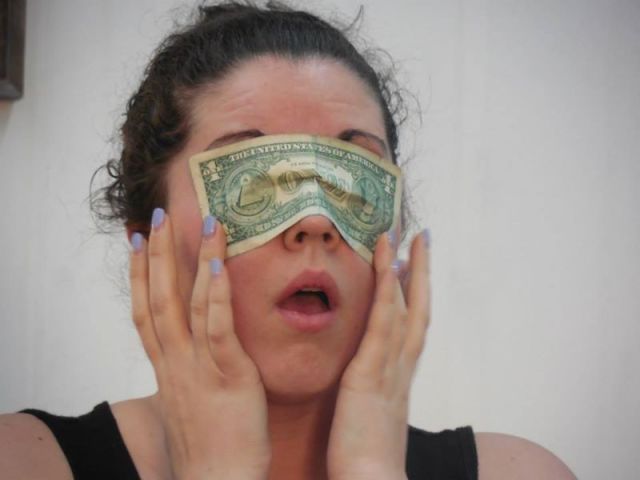 Performing Michael Bay (and other people) at Me, My Selfie, and I, an exhibition of performance art by Eileen Tull at popp=d art gallery in Cincinnati, OH (2014)

As a solo performer, my “studio” tends to be mobile and ethereal. I find my best ideas come while riding public transit, surrounded by the diverse faces of Chicago, riding shoulder to shoulder through the city. I’ve often found myself creating next to Lake Michigan or hidden corners of Lincoln Park; I particularly cling to patches of nature surrounded by city.

Performance art was never a path that had occurred to me. I assumed that my artistic outlet would be in the wings of traditional theatre, but as I experienced more and more art in the communities I’ve lived in, my definition of performative art expanded. Barriers and borders dissipated, and I found that I was able to stretch my perception of performance in order to serve the ideas I wished to express. Not all stories are plays, some are performance art, some are spoken word, and still others might be a monologue, and on it goes. I also never imagined I would be so eager to draw on my own experiences as opposed to fiction. But I’ve found that my truth rings more pure and interesting to me than imagination does.

I tend to suddenly sit up in bed, struck by ideas as my brain fades to sleep, and begin working into the night. I wish to become more regimented, but at the moment, I wait for the iron to heat up and it must be immediately struck.

These last five years have brought considerable changes to my life. I’ve moved around to different states, dealt with cancer, death, and substance abuse, and all the other trials and joys that your 20s bring. As I’ve grown more comfortably into my own skin, my creative work has changed rapidly. Five years ago, I was not performing. Five years ago, I thought I would be just an offstage presence, a facilitator of art, not the direct maker. I was afraid to tell the stories I wanted to tell. Now I throw my life and insecurities and opinions out onto the stage, warts and all. My creative output is at an all time high, and I feel that I am making honest and important work.

My family and friends have supported and inspired my work in immeasurable ways, but I also draw from new and old sources constantly. I am inspired by the work of Walt Whitman and Sylvia Plath; their concise and accessible mastery of language has pushed my writing to new heights. I have been led by the work of Julia Cameron, the author of “The Artist’s Way,” on how to conduct a creative life. I blatantly steal from Tig Notaro, Gilda Radner, Steve Martin, Patti Smith, Marina Abramovic, Judy Chicago, and Robin Williams. Humor is very important to me, and I am particularly drawn to people who sow humor out of their darkness.

Any aberrations from a creative path have been brief and ultimately unsuccessful. Even non-artistic interests (running, historical architecture, etc.) seem to have a creative element to them.

Performing #thinspo at Me, My Selfie, and I, an exhibition of performance art by Eileen Tull at popp=d art gallery in Cincinnati, OH (2014)

Eileen Tull is a performer, theatre director, and writer currently based in Chicago. Eileen creates a variety of work, mainly focusing on solo performance as a storyteller, performance artist, poet, and comedian.

A native of Cincinnati and a former resident of the San Francisco Bay Area, Eileen has worked on stages across the country. Recently, she has performed in the New Seeds Festival (Tampa), Bad Theater Fest, United Solo Festival (New York City), and the Derby City Comedy Festival (Louisville). Additionally, Eileen’s work has been seen in Philadelphia, Boca Raton, Indianapolis, Dayton, Columbus, and Santa Cruz.

In San Francisco, she worked with The Cutting Ball Theater, Intersection for the Arts, Playwrights Foundation, Jessica Ferris Productions, and San Leandro Players, most notably stage managing The Odyssey on Angel Island with We Players, a sprawling site-specific adaptation of Homer’s epic staged on Angel Island State Park. Eileen also debuted her one woman show, Jesus, Do You Like Me? Please Mark Yes or No., at the 2012 San Francisco Fringe Festival.

Eileen recently moved back to Chicago where she has worked in many different capacities as a director, arts administrator, and performer. Most recently, she performed Jesus at the 2014 Chicago Fringe Festival and debuted a new solo piece Hi, I’m Eileen with Chicago Dramatists. Her work has also been seen with Theatre Seven of Chicago, Prologue Theatre, 20% Theatre, Three Cat Productions, Proxy Morons, Present Tense, Salonathon, Zanies Comedy Club, Hound Dog Comedy,The Abbie Hoffman Festival, Casa Duno, Knife and Fork, Odradek Theatre, Bad Grammar Theater,Beast Women, Loose Chicks, Serving the Sentence, Is This A Thing?, One Stop Productions, Story Collector, The Enthusiasts, The Nerdologues, The Stoop, 7 Stories, and the Dank Haus.

Performing This is Narcissus at the Kennedy Heights Arts Center in Cincinnati, OH (2013)

The purpose of this project is to introduce its readership to a diverse collection of art that is being produced at the national and international level. Our goal is to engage the public with information regarding a wide array of creative processes, and present the successes and failures that artists face from day to day. The collaborators hope that this project will become a source for exploring and experiencing contemporary art in all its forms.
View all posts by 365Artists/365Days →
This entry was posted in Feminist Art, Performance and tagged Chicago, feminist art, Performance, performance art, Solo performance. Bookmark the permalink.