I was born in Pakistan to an English mother and Pakistani father and came to the States when I was really young. I started my creative pursuits as a musician before transitioning to film and video. Coming from a culturally/ethnically mixed background has only recently begun to influence my work in an obvious way, as I’m currently exploring themes related to history and genealogy. My love of music is probably evident in the way that I incorporate it into some of my work.

I don’t work in a traditional studio environment. My studio is simply a room in my house, as that’s where I do most of my writing, research, and editing. Obviously, video shoots take me to various locales, and I do a lot of my writing in cafés and so on, but most of my ideas are formed at home. 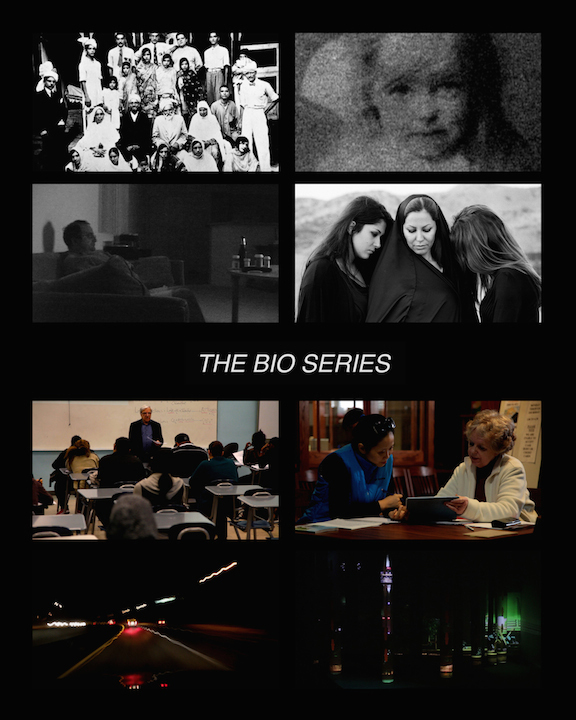 Considering how modest or non-existent my budgets tend to be, I necessarily have to take on multiple roles. Working in film and video, I often approach my work more like a writer, photographer, or painter, as opposed to more traditional filmmaking methods that involve a lot of people. Making fictional narrative films is different though, since the process is more collaborative and usually involves a cast, crew, and some cash. But I enjoy both methods.

When do you find is the best time to make art?

Do you set aside a specific time everyday or do you have to work whenever time allows? Any time, as long as coffee is involved. I can’t really set aside specific times due to other responsibilities (a job, for instance) and because I’m generally disorganized.

My previous work dealt a lot with inner states and personal baggage (desires, obsessions, failures, etc.) It also looked at how these things connect with broader issues, prompting some to see the work as political. In the past couple of years, my work has focused more on stories of people and environments. My recent web-doc explored the lives of those closest to me. My ongoing “night” series also tells stories but in a much different way, and with the subjects being places instead of people.I suppose what ties a lot of it together is this idea of the “portrait” (whether of the “self” or of someone else – or of somewhere else) as well as an interest in a certain formalism and/or experimentation. Since everyone is a filmmaker now, I think that’s probably more important than ever. I’m also interested in notions of time and place (nighttime in Los Angeles is a common backdrop in my work), as well as the way art affects people on an emotional or visceral level.

My parents have had a huge impact on my practice, as they have helped support me (often literally) over the years and have occasionally found themselves the subjects of my work. My partner, Nebras Hoveizavi (an artist, herself) gives me encouragement, feedback, and artistic inspiration. And I have a handful of close friends who support what I do (or at least humor me) and sometimes act as collaborators.I’m not a big philosophy buff, but I’ve often found myself attracted to various fictional works that have a philosophical edge to them (e.g. Nausea, Crime and Punishment, Notes From Underground.) I’m also drawn to autobiographical fiction, both in literature and in film.I had a professor in college, Tim Maloney, who helped shape the way I view cinema. In grad school, I studied under filmmakers like Thom Andersen, James Benning, and Gary Mairs.A lot of artists have inspired me over the years. In the cinematic arts, it’s ranged from people like David Lynch to Bill Viola to various European and Iranian filmmakers. My favorite painter is probably Edward Hopper. And music can be really inspiring, as can photography and mixed media art.

Financial concerns are always an issue in the arts, unless you’re one of the lucky few. I’ve seen people give up their art practice entirely because of the need to simply support themselves and their families. Apart from that, though, I’ve never really wanted to be anything else or been particularly good at anything else. I have other interests, obviously, but nothing that would tempt me away from my art practice. Having said that, I’ve been involved in (and will hopefully continue to be involved in) a variety of creative pursuits in addition to filmmaking (writing, music, photography, etc.) Other interests include history, genealogy, current events, and social media.

Jamie Naqvi is a Los Angeles-based artist working in film and video. He’s made short films, video installations, and web-based work and is currently developing his first feature film. He holds an MFA from California Institute of the Arts.

The purpose of this project is to introduce its readership to a diverse collection of art that is being produced at the national and international level. Our goal is to engage the public with information regarding a wide array of creative processes, and present the successes and failures that artists face from day to day. The collaborators hope that this project will become a source for exploring and experiencing contemporary art in all its forms.
View all posts by 365Artists/365Days →
This entry was posted in Installation, Video and tagged cinema, film, Installation, Los Angeles, Video. Bookmark the permalink.