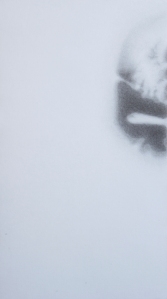 My work is concerned with a range of ideas from religion to science, and my feeling that, though the demise of religion is a healthy and necessary thing, the purely rational/materialist society we seem to be moving towards is not necessarily a solution. I am excited by the possibilities inherent in science but feel it often comes with a dogmatism that is dangerous. I believe that art can act as a counter balance to such overarching rationalism. I mostly work in sculpture, sound, drawing and installation and my work is process-based. The sculpture has been on scales from the very large to small, and with a variety of materials. These include conventional materials such as plywood, mdf and metal, as well as cellophane or audiotape. The forms I create seem to be increasingly minimal, and often colour is a significant element. I worked as a sound engineer for a couple of years a long time ago, and this has led me to explore sound as a medium. I have been creating soundworks for both installation and headphones using a combination of found sounds and processing. I have even used my own vocals at times. Sounds can be taken from field recordings, such as an MRI booth In a hospital, from YouTube clips or from the salvaged audio tapes that ended up as sculpture. I started drawing only about 5 years ago, and it has become hugely important to within practice. The drawings are primarily in pencil, though I have recently been working with pen, and I also do occasional live drawings in charcoal.

I grew up in Cork City in the south of Ireland in a suburb which was, in the early days, on the edge of the countryside. This allowed for a lot of roaming and exploring in the days when children were allowed such freedoms. This freedom was even greater during summers in the west of Ireland, a special place in the Irish psyche that seems increasingly precious today given the cleansing of other landscapes over the past 20 years. I spent 8 years living in Conemara, an incredibly beautiful and remote region of the west when I was in my 20s. This access to space and to nature was important as the loss of the natural world is something that concerns me greatly. My early work was very much engaged with this environmental mindset, but somewhere along the way it occurred to me that the environmental problem was but a symptom of other issues. As we have moved from the traditional and religious world to one in which scientific rationalism holds sway there has been a loss of something (spirit, perhaps?) a connectedness with each other, with ourselves and with the natural world. I see art as a means to reconnect, not just for the artist, but for the viewer also.

My studio practice has been evolving greatly over the past 5 years, and in truth I’m not sure it has found a pattern just yet. Maybe it never will and will keep evolving. It used to be very regimented, 8 hours a day, 6 days a week in the workshop making sculpture. Eventually, I worked myself into a very unproductive corner, and quite literally I had to go back to the drawing board to figure it all out. I remember the day I resolved to do this – a sculpture I had been working on for several months ended up on the bonfire. I closed the workshop that day and shortly afterwards moved from one end of the country to the other. I then set about re-inventing my process, as well as my life. 5 years later I find myself with a young family, which means that even if I wanted to spend so many hours working, I couldn’t. And somehow, having a bit of space from the work has proven a lot more productive for me. An ongoing problem I have is that I have a need for both a clean space and a dirty space, a workshop for making sculpture and a studio for drawing and computer work. Unfortunately, this is not a possibility, so I have to combine the two. For the past few years I’ve had a studio which from time to time has had to make do as a workshop. This is very problematic with noise and dust and access etc. It also has meant that I haven’t been as prolific as I would like. I have just recently moved into a full time workshop, but now of course I’m stuck for a studio. We will see how it works out. I’m hoping it won’t be too damp for the paper work, and I have managed to box off one corner to make a tiny office for my computer. One day……….

The roles I have not envisioned generally involve other types of work that I do to pay the bills. This has recently included everything from picture framing and carpentry to filming accountancy lectures for online learning.

I work whenever my time allows, but when I do get consistent runs at it, I find the mornings to be the most creative.

My work has changed enormously over the past 5 years. My primary training is as a cabinet maker, so I am a self-taught artist. I started out making sculptures, nearly always out of wood, and they were very craft-based, intricate assemblages. Over the past five years I have really worked hard on developing my conceptual process. My work is still largely dependent on manual skills, even the sound work, but it has become a lot more sophisticated. I have learned how to really refine ideas to their most crucial form. 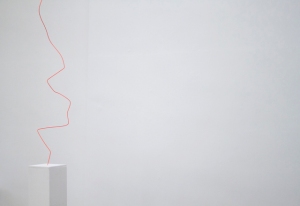 I often find that when I hear/read about an artist that excites me that the idea of the work is generally much better than the reality. I did have a life-changing moment at an Anish Kapoor show a few years ago in the Royal Academy in London. That was work that had an incredible sublime energy. A lot of it was quite dark, violent even, which I like. That level of energy that he achieves is something I aspire to in my own work. Apart from that, I have never really had any significant mentor, but my life partner has become one. She is an incredible person from whom I learn every day about myself and about navigating the world. She has had an affect not just on the work itself, but in particular how I disseminate it.

I have toyed at times with other careers. I have previously worked as a sound engineer, a cabinet maker, and a chef, and aspired to be a musician. About once every year or two I have a minor crisis in what I’m doing and start thinking seriously about other possible careers which would satisfy me creatively. The latest one was last year I was contemplating architecture. These never amount to anything, as art is the one thing that can encompass all my interests, and that can challenge me enough.

Based in Dublin, I work in both visual media and sound. I previously trained as a furniture designer and maker at The Furniture College, GMIT Letterfrack (2000-2002), and prior to that, I trained as a sound engineer at Pulse College, Dublin (1997-98).

In October 2014 I had my second solo exhibition, This Way To Enchantment, at Sirius Art Centre in Cobh, Co. Cork. This consisted of a large body of work in sculpture, sound and drawing. The sound works in this show have since been featured on the radio show Nova on national radio station RTE Lyric FM and will also feature at the “Soundscapes & Sound Identities” international symposium on soundscape organized by the FKL in Italy in May 2015.

In 2011, my first solo exhibition, Build Your Church On The Strength of Your Fear, was held at the Camden Palace Hotel Arts Centre in Cork. This consisted of a large-scale sculptural and sound installation which was the first large visual art project to be crowd-funded in Ireland.I first exhibited as an artist in 2005, in a 2-person show at Gallery 44, Cork, during the city’s year as European Capital of Culture. Since then I have exhibited widely in group shows including at the Royal Hibernian Academy Annual Exhibitions – where, in 2006, I won an award for a ‘Sculpture of Distinction’ – Farmleigh House, Dublin, Ormston House, Limerick, and the Solomon Gallery, Dublin. In 2012, I made my first foray into international waters, exhibiting a series of 7 drawings in a group show at Temporary Gallery, Berlin.I have also developed a new strand to my work over the past 2 years with a number of live drawing performances in conjunction with cellist Kate Ellis and the RESOUND Collective. These took place in various venues and festivals across Ireland, including the National Gallery, the Model in Sligo, Kilkenny Arts Festival and Cork Midsummers Festival, to name a few.

.All images copyright of the artist and used with their permission.

The purpose of this project is to introduce its readership to a diverse collection of art that is being produced at the national and international level. Our goal is to engage the public with information regarding a wide array of creative processes, and present the successes and failures that artists face from day to day. The collaborators hope that this project will become a source for exploring and experiencing contemporary art in all its forms.
View all posts by 365Artists/365Days →
This entry was posted in Drawing, Installation and tagged abstract, Drawing, Europe, sculpture, Sound Installation. Bookmark the permalink.