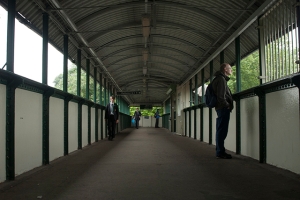 Where art sits, how it is viewed, how ‘visible’ it is and how it can be experienced—these are some of the questions which occupy my practice. In site-specific works, using video, sound, performance, sculpture, photography and drawing, I seek to draw attention to the discarded—forgotten, unseen details—as a trigger to personal memory.

I am interested in creating works that blur the boundaries of art and scenography. Using scenographic processes, as a mode of working with the material, site and a traveling body, I explore physical and experiential (sensory) relationships between them. In my work I attempt to activate ’spaces between’ that connect ’an inside’ with ’an outside’. I research, and am influenced by the site and its history. I look into archival pictures, found materials and old stories in order to imagine, reinterpret, and be inspired.

I am Polish. I grew up watching film classics created by directors like Kieslowski, Lynch and Polanski. When I finished the highschool I moved to a magical city- Cracov. Initially I started studying Mathematics, but soon bored and inspired by the bohemian atmosphere of the city, I started experimenting with photography. I used to set up the darkroom with my friend in her flat bathroom. First during the day we would wonder around the old/ decaying architecture taking B&W pictures and then, at night, make enlargements till the morning next day. It was magical ! We were so so inspired !!!

After that I really wanted to study Photography in the biggest possibly media hub. My sister was living in London. So I decide to join her. From a magical city I moved to a modern busy and never clean city of London. It was a contrast. I went to the art school and finished photographic degree.  During this time the technology brought to us digital cameras. Suddenly everybody could be a photographer.

I was disappointed. I did not want to be like every digital photographer, so I started mixing my photography with performance. I wanted to expand my creative skills. I went on to volunteer with different kinds of immersive theatre production companies making props and sets. I started attending live drawing classes, as well, as finished short sculpture courses.

In whatever I do, I dont like being pigeon holed. I dont like boxes, and categorising.  It was what teachers tends to do in the art school. Put a label on you. I wanted to be boundless.

I was disappointed with my BA, and wanted to study MA where experimenting with mediums, and focusing on the process is encouraged. So, I discovered Scenography. This seam to be fitting with all my interests. The term is boundless, and I ended up gaining Masters of Art from the Drama/ Theatre School. I am proud of it.

I do believe everything that I have experienced, has influence on my work. Photography degree left in me the sharp eye for the  composition, love for the lighting and colour. My masters in Scenography, taught me how to work with space, material and embodiment, as well as how to make films. Here I felt in love with the term spectacular and sensorial staging.  Mathematics, and science helps me to create magic, as I can always proof something exist, as longest I have a good hypothesis/ equipment.

The concept of the artist studio has a broad range of meanings in contemporary practice. Artists may spend much of their time in the actual studio, or they may spend very little time in it. Tell us about your individual studio practice and how it differs from or is the same as traditional notions of “being in the studio.“

I do spend a lots of time at my computer at home, researching, and finding out about different technical tricks. So, called “artistic studio” I set up temporarily. Like I was staging something. I only need a studio when the actual testing, and experimentation happens, but many times my projects are outdoors, or I am invited to create something site specific for a particular space and time. A big part of my work, is figuring out how to put it all together. That is why I need a blanc/empty space where I can sit and think. Sometimes I only have a table, or a chair in my temporary studio. Most of what I make, is set up in the location for short period of time, or only for a recording. Different mediums, different effects, recordings, editing, projecting, ets… You would be surprised but I use quite a lots of equipment in my work, so I need a space to test it.

Planning, organising, writing lots of applications, networking and in general doing a lots of admin work. These parts are not joyful for me at all. Worrying about  finally getting paid from making art. Documenting.

I work whenever times allows. The best time for making art is for me, when I am invited/ commissioned to do a project. 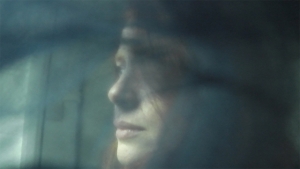 I never before created public art. I used to take a lot of self-portraits when I started. Now I am creating participatory art, as well, as collaborate as a scenographer. It seams to me, I am more attracted to videos and sound now. I don’t use anymore still images when I present my work in the gallery. My work is large scale, and sometimes the only existence left after it is a documentation. So, yes this is different. Before my work was photography, now the photography is only a mode of documenting my work.

Initially it was my sister curator and her partner artist who introduced me to the art.

Later on, I was fascinated by Polanski biography, and  I  became a photographer,  as he was when he started.

As, my knowledge expanded further I found myself being inspired by the movie directors such as Lynch and Tarkovsky. I like setting up visually mysterious situations.

Then fashion designers modest Yamamoto,  and cutting edge Pugh. I admire how they both use simplicity in they design. They use techniques, or enhance a detail other designers discard. They not scared to use darkness in they work.

The sense of spectacular and staging element in my work, somehow are influenced by amazing works by Barney. The working with the body and space have some kind of linkage to Waltz dance staging. I like the unclear meaning/ alternative use of objects and the contrast. I like showing body pushed to the limits, not necessarily physically- like Waltz choreography, but psychologically.

I sign in the choir and would like to be in the band at some point in the future. I also would like to direct in the near future a feature film, with a big crew. When I grow old and am around 50 I would like to be a therapist. I am interested in psychology. I also write, and I hope one day somebody will publish my diary I have been writing almost every day since 2010.

Barbara Bargiel (b.1982, Poland ) past 11 years lives and works in London. She studied Scenography at the Royal Central School of Speech and Drama and Photography at the University of East London. Recent exhibitions include NAA Festival at the Biblioteca Municipal in Barcelos (Portugal), Space Invaders: Neighbourhood Watch at the Jewish Community Centre (JW3, London), and a solo show Waiting Room at Platform1 Gallery with the participatory performance at Wandsworth Common Train Station (London).

The purpose of this project is to introduce its readership to a diverse collection of art that is being produced at the national and international level. Our goal is to engage the public with information regarding a wide array of creative processes, and present the successes and failures that artists face from day to day. The collaborators hope that this project will become a source for exploring and experiencing contemporary art in all its forms.
View all posts by 365Artists/365Days →
This entry was posted in Installation, Video and tagged ephemeral artwork/installation, filmmaker, London, scenographer, visual artist. Bookmark the permalink.