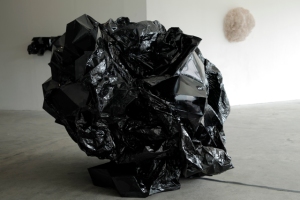 Our environment is one where automation, information, consumerism, progress and erosion are collapsed into a muddle that both celebrates and questions its status quo. The mechanical sculptures I construct explore the complexities of this ambivalence through errant machinery, polished forms that collapse and resume composure, and illuminated projections or screens that depict only the looping and chattering mechanisms behind them. The work aims to imbue these absurd and irrational scenarios with a pathos, humor and aesthetic seduction so as to draw out a conversation about our own relationship to speed, progress, technology and survival within perpetually fracturing and rearranging circumstances. The work’s looping, rhythmic motion transforms the sculptures from motorized machines to figural abstractions or landscapes. The mechanization in these pieces work in opposition to what we demand of the mechanized world around us. It seeks to offer something else, something that is slow and inefficient but more closely aligned with our selves.

I’ve ways been curious about how things work and how things are made. I went to art school, which afforded me the time and permission to experiment with and investigate materials and processes.   I had always been drawn to sci-fi and surreal imagery, which was considered taboo and kitschy (not in a good way) where I was studying during undergrad. Much of my work came about trying to sublimate my interests and influences, which ultimately allowed me to define my own voice more clearly.

I would say I have a somewhat “traditional” studio practice. I live and work in the same place, which lets me have more time to be in contact with things I’m working on. I used to spend lots of time at hardware and mechanical specialty stores, lumberyards, and metal distributors. I love going to all those places because physically seeing materials and tools helps me solve problems and generate ideas. Over time, nearly all those types of places have closed, moved out of New York City or operate online only. Consequently, I too am online looking up materials etc. In some ways it’s more efficient, but less fun.

I teach at Pace University. Working with students is rewarding especially if you have the opportunity to be part of someone’s process of discovery or “ah-ha” moment. It’s challenging too, students constantly ask questions about things you over time have accepted or taken for granted. These conversations keep me questioning and reframing my own positions and stop me from falling into a sedentary rut with my opinions.

I’m very flexible and like to work anytime of day or night.

Most recently I have been exploring work that deals with projected images. These are completely produced through analogue methods. The sculptures contain lights and curved glass lenses to project images of themselves onto the surrounding gallery walls. The light projections allude to digital screens, monitors or surveillance video. The sculpture, Infinitas Via (2012) is an organized mass of braces and pulleys spooling dozens of colored elastic bands. The exploded diagram becomes cohesive as a lens bends the light reflected from the structure to create a mirage-like image on the wall. While the structure itself is a closed looping cell, the projected image depicts an illusion of traveling down an endless night road, suggesting a hallucination of escape. The animated projection is essentially a type of self-surveillance or monitoring, the piece collapses the image of a cage and escape. The machine becomes figurative, an analogue mechanism whose only function is to project a looping image of progress or liberation. In these works I am interested addressing issues regarding actual and perceived agency, and how a hallucination or fantasy of escape can satisfy the need.

I am influenced by and draw inspiration from many different sources. Recently I’ve been thinking about Zilvinas Kempinas’ simple and transformative installations and razzle dazzle camouflage, David Lynch’s lighting and sustained mood sequences, and Thomas Demand’s translation of paper into photographic scenes.   I’ve also had Robert Gober’s recent retrospective in mind, specifically the way he creates dislocated spaces.

To a greater or lesser extent, my interests tend to be filtered through the context of art making. That is to say, I have “other interests” but I relate them back to ideas for the studio.   I’ve always had day jobs but those never replaced wanting to work in the studio. Although there was a fleeting period directly after graduate school when I was looking for jobs specifically tied to New York City. So I contemplated joining the Police Academy, but after one recruitment meeting I thought otherwise.

Charlotte Becket lives and works in New York City where she is an Associate Professor at Pace University. She attended Hunter College’s MFA program and received her BFA from the Cleveland Institute of Art. Solo and two person exhibitions include Valentine Gallery NY, Crisp Gallery in London, LEAP in Berlin, and Taxter & Spengemann in New York City as well as group exhibitions at Gazelli Art House in London, Tanja Grunert, Anna Kustera, NY Studio Gallery, Passerby and the Invitational Exhibition Academy of Arts and Letters in New York City. She has been invited to lecture on her work at various galleries and universities and has been the recipient of grants from The New York Foundation for the Arts, The Joan Mitchell Foundation, The Tony Smith Foundation, and the Verizon Foundation. Her work has been reviewed in The New York Times, TimeOut London, ArtForum, and Art in America, among others.  She was recently included in, 100 Artists, a compendium of interviews with 100 international contemporary artists by Francesca Gavin.

These kinetic sculptures move slowly, performing gestures born from the banality of the human condition. Their looping, rhythmic motion transforms the sculptures from motorized machines to figural abstractions or landscapes. Rigid symmetrical forms are punctuated with bulging rifts that slowly swell, either in a moment of expansion or exhale. As the forms shift and redirect light they become hallucinogenic and unstable, subsisting in perpetually fracturing and rearranging circumstances. These bloated bodies creak and labor, endlessly moaning and muttering to them selves in an unresolved internal dialogue. As the polished forms collapse and resume composure they strains under the task of fusion and separation in an irresolute tug of war.

An organized circuit of braces and pulleys spool dozens of colored elastic bands, a lens bends the light reflected from the structure to create a mirage-like image on the wall.

While the structure itself is a closed looping cell, the projected image depicts an illusion of traveling down a road, suggesting a hallucination of escape. The projection acts as a type of self-surveillance, collapsing the image of a cage and escape. In these works I am interested addressing issues regarding actual and perceived agency, and how a hallucination or fantasy of escape can satisfy the need.

An extroverted mass projects its interior mechanism to create its own atmosphere, prompting a dialogue between the rational topography and its dislocated environment. The projected imagery builds in superimposed layers around the space.  As light leaks and pools across the façade of the central form it leaves pinhole after-images and sweeping slivers of light that take over the bulky mass.

Through reduced means using plastic containers, light bulbs and lenses, a rudimentary projection device is created wherein the light source is simultaneously the image.  The light bulb itself, as an updated quintessential pop object, also evokes searchlights and observation instruments.

The purpose of this project is to introduce its readership to a diverse collection of art that is being produced at the national and international level. Our goal is to engage the public with information regarding a wide array of creative processes, and present the successes and failures that artists face from day to day. The collaborators hope that this project will become a source for exploring and experiencing contemporary art in all its forms.
View all posts by 365Artists/365Days →
This entry was posted in Kinetic Sculpture, Light Sculpture, Mechanical Sculpture, Sculpture and tagged installation art, Kinetic Sculpture, Light Sculpture, Mechanical Sculpture, New York City. Bookmark the permalink.