My work generally consists of simple assemblages of existing objects. These arrangements discuss aspects of the human condition such as tragedy and failure. Vehicles for this discussion have included taxidermy animals, illusionary magic, and public tragedies.

During my undergrad at the University of Tennessee, my mother was diagnosed with leukemia and passed away soon after. This had a tremendous affect on the direction and content of my work. My work became a therapy for me; I was able to start to make some sense out of a senseless personal tragedy. I found that a lot of the issues I was grappling with were able to translate to more universal themes of failure, loss, and confusion. 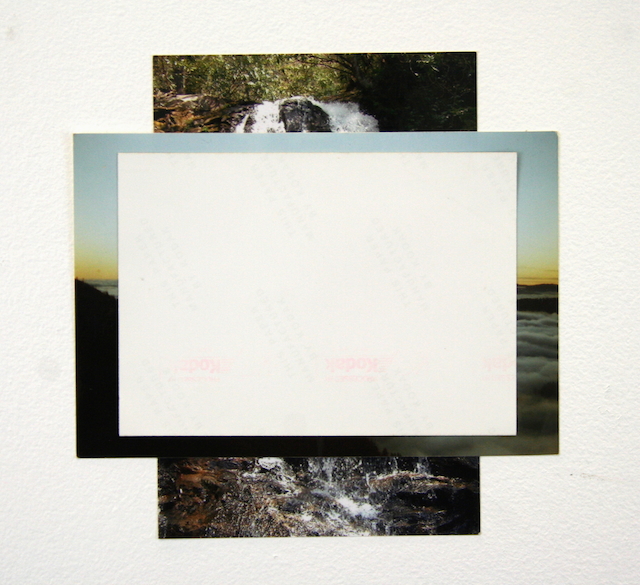 The bulk of my time spent with a piece usually involves planning. This takes place outside of the studio, including research, sketching, and seeking out materials. I try to allow time for an idea to gestate and become familiar with it. The internet is an incalculable resource in my process. Most obviously, it allow the freedom to seek out nearly any imaginable object or material. Second, an endless stream of images and information can lead a tangent of thought to an unexpected result. The wealth of information surrounding how these objects relate to language and the human experience informs how a piece will grow conceptually.

However, mentally planning a three dimensional work reaches limitations at a certain point. The work  grows further then in a more traditional studio practice. The use of mock-ups and experimenting with arrangement helps actualize the work in a more grounded way. In addition to this, there is usually some “behind the scenes” construction involved. That is to say, I make an attempt to give the appearance of a light touch with my materials, and approaching solutions to problems many times proves more technically difficult than appearances might suggest. Problem solving conceptually and then in a physical sense work in concert help to create succinct work.

As is the case with many young artists, I initially hoped to bring a radical approach to the conversation of contemporary art. I wanted to be a Duchamp, but as a got older I realized that having a meaningful voice doesn’t necessarily require being revolutionary. What started to attract me more was speaking softly. I started to become less interested in impressing my audience and more interested in talking to them in a meaningful honest way.

I like making work at night; there is a quietness then that gives me clarity. Although I try to maintain a constant internal dialogue, in the evening I find that I’m able to narrow these thoughts into more concise ideas. In addition to this, there is a kind of “drunken tiredness” that allows me to make less inhibited and self-conscious decisions. When revisiting these decisions, they are sometimes be fruitful but often not. The important thing is allowing mistakes to happen, and hopefully surprising yourself. 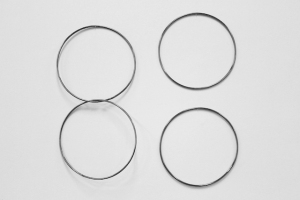 Five years ago I was in the thick of my undergraduate degree at the University of Tennessee. I was immersed in theory, critique, and studio practice. The environment of academia can be great for incubating ideas and direction or practice.

Once graduated, I knew I wanted my work to make a lateral shift, but was unsure what that might look like. I loved being in school, but was aware that I was in a “bubble” of sorts, and that the environment was not reflective of the real world. I took a short sabbatical from making work in order to approach things with a fresh set of eyes. As a result, how I approached making art became a more complicated endeavor. Challenges are healthy though, and conducive to innovation.

In a more non-traditional sense, a major influence of mine has been The Simpsons. Growing up with the show, my comedic sensibilities are inextricably bound to the shows writing style. Especially in early seasons, the writing maintained a great balance between the irreverence in humor an emotional appeal. I’ve always attempted to emulate the way The Simpsons is able to take a relatable premise and subvert it in an unexpected way. That is to say, a common theme in the show is to set up a joke in way that seems familiar, then take the punchline in a totally different direction. This concept, as it translates to my work, is likely why many experience an element of comedy in my work, even though it deals with more serious content.

I’ve always been interested in writing, and if I hadn’t pursued visual art, that’s likely the route I would have gone. I’ve recently been dabbling in comedy writing, and the challenge is exciting to me. Comedy theory is complex, but the result is extremely direct. Similar to music, I enjoy that comedy is easy to enjoy without necessarily understanding the framework behind it. Comedy taps into something innate; you know it when it happens.

I’m also interested in the workings of advertising. Effective advertising employs much of the same sensibilities and tools as good art, albeit with commercial motives. That being said, as in any discussion of art, that line has been blurred time and time again.

AC Wilson (b. 1989) is an American artist working in sculpture. Wilson was born in Mesa, Arizona and raised in Sleepy Hollow, New York. He received a Bachelor of Fine Arts in sculpture from the University of Tennessee in 2012. He currently lives in Richmond, Virginia. 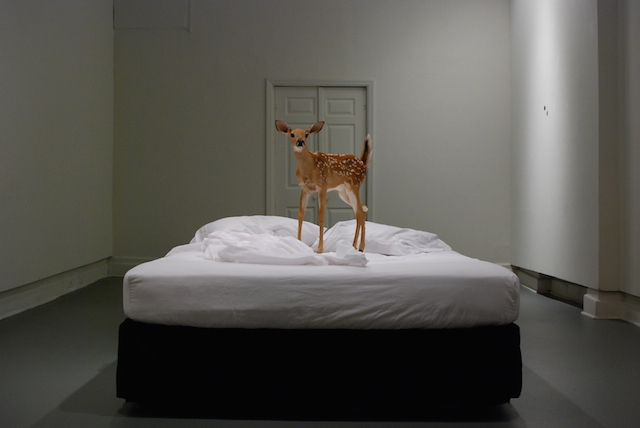 “What happens when you die”
2010
taxidermy fawn, bed, cremation tag

The purpose of this project is to introduce its readership to a diverse collection of art that is being produced at the national and international level. Our goal is to engage the public with information regarding a wide array of creative processes, and present the successes and failures that artists face from day to day. The collaborators hope that this project will become a source for exploring and experiencing contemporary art in all its forms.
View all posts by 365Artists/365Days →
This entry was posted in Assemblage and tagged assemblage, magic, taxidermy, tragedy. Bookmark the permalink.