I use primarily mixed media drawing but also some painting, video, and still photography as a means to examine the framework that defines my identities as artist, academic, wife, mother, etc. I’m interested in how language and expectations, written or unwritten, guide behavior and performance in work.  As a result of this, I do some of my work by punching into a time clock I’ve installed in my studio, or labeling my drawings as “research.”  I also practice more traditional crafts like knitting.  In every drawing I execute, there is always some whole or partial breakdown of written language or figurative imagery, usually manifesting as scribbles, marks, or spills.  While these marks are part of the accepted language of art, they disrupt other types of discourse.
While I am partially using my current practice to defy institutional definitions about work, I am also trying to dismantle my own assumptions about how to behave.  As a good student, I never sat at the back of the classroom scribbling in my textbook.  The work I’m making now is reminiscent of those subtle forms of resistance.

My father was an academic and both of my parents encouraged each of their children to do something they loved. My husband was also supportive in that he moved with me across the U.S. for graduate school and my current teaching position.  While these things encouraged me to continue on the path toward becoming an artist, the forces that influence what I do as an artist have more to do with the politics of being an academic and the imbalances it often causes in my life as artist and family member.

My studio space is in my own home and, over the years, it has doubled as a band room and storage space as well.  This limits what I can actually do in the space.  I’ll execute paintings or medium-sized drawings in there, but a lot of work is done elsewhere- I’ll punch a time card in the studio but then sit on my bed to draw on it, or I’ll do embroidery or knitting on my lap in front of the television with my kids.  Later, I’ll gather these bits and pieces together and spend time in the studio making connections and arrangements from them.  So my studio is larger than one room in that I work around the house, but it is also smaller in that I do not have a space that is exclusively dedicated to my practice.
This contrasts with how I work at school since I also work collaboratively with my students in socially engaged projects.  For this, we work out in the community so a youth detention center or a nursing home might be the physical space we inhabit and the “studio” is the time spent with its inhabitants.

I’m one of those people who always drew as a child and got attention for it, so for a long time craft, proficiency, and verisimilitude were my goals and seemed to be reason enough for making art.  I was an adult before I realized that artists are visual philosophers.  I mean, I thought that the pours and strokes on a Pollock canvas were beautiful and masterful and that their physical presence was the only thing that justified their existence.  It may sound silly now, but that late-blooming realization allowed me to question my own thinking and to take risks for the first time.  So, to answer the question, I guess I’d say that to act in the role of constant critic and philosopher, of the world and of myself, was not what I anticipated but it is thrilling and empowering at the same time.

Mostly, I’d say I work whenever I can but that fluctuates over the course of the school year.  During summer and other vacations, I will spend some time every day making short trips into the studio, but I’m a night person, so the bulk of my activity happens late at night and into the early morning.  The piecemeal lap-work I described above is what I do most of the time during a semester, and that happens any time during the day that I can fit it in. 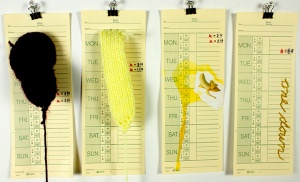 Five years ago, I was making large-scale charcoal drawings from found photographs and experimenting with video.  I didn’t start truly examining the framework of my own life and making work about that until 2011.  But then I made a video about being in academia and the rest of my work changed, too.  The layered drawings with educational references started sometime after that and I bought a time clock and started punching in during the summer of 2012.

There are so many people and writers I could name.  In trying to make this brief, I’ll just list three that immediately come to mind: reading Michel Foucault influences my outlook, collaborations with my colleague Laura Mongiovi influence my relationship with the materials I use, and the games and jokes between my son Otis and I continue to inspire the content of my work.

That’s a dangerous question!  I foster dogs for a local rescue and there are plenty of times I’ve thought about packing up this whole life and trading it for a life of rescuing animals. But dogs don’t appreciate art, so I’d probably get resentful.

Leslie Robison lives in St. Augustine, Florida where she serves as an Associate Professor and Chair of the Department of Art & Design at Flagler College.  She received her MFA from the University of Florida and her BFA from Washington State University.
Robison’s work has been featured in solo and group shows throughout Florida.  Her drawings, paintings, and videos have also been included in national exhibitions as well as in Canada, and Europe.  A believer in collaborative experiences and social engagement, Robison has contributed to participatory initiatives in Atlanta and New York while also pursuing community-based projects with her students in St. Augustine.

The purpose of this project is to introduce its readership to a diverse collection of art that is being produced at the national and international level. Our goal is to engage the public with information regarding a wide array of creative processes, and present the successes and failures that artists face from day to day. The collaborators hope that this project will become a source for exploring and experiencing contemporary art in all its forms.
View all posts by 365Artists/365Days →
This entry was posted in Drawing, mixed media, Painting and tagged clown noses, Drawing, Flagler College, St. Augustine, yarn. Bookmark the permalink.