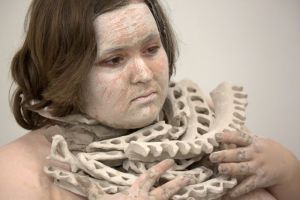 For some time fairy tales and fantasy have inspired my imagination and curiosity about their effects on women’s roles and the construction of their identities. In my work, I fracture cultural constructs such as gender, beauty, and the body politic to expose, examine, and critique their social and historical assumptions. To do this I work in mediums, such as performance, sculpture, video, drawing, and installation.

I grew up in the Pocono Mountains of Pennsylvania and I went to private school for twelve years. During this time, I was expected to wear a uniform and we, the pupils were taught to be proper ladies and gentlemen. The idea of becoming a proper lady was instilled in me at a very early age, which meant being polished and very feminine. However, my parents didn’t subscribe to that mentality.. I grew up playing with Teenage Mutant Ninja Turtles alongside my dolls. The first Halloween costume I remember was an angel with an orange Michelangelo (the Teenage Mutant Ninja Turtle) mask. Looking back, moments like these taught me how to observe gender roles and what was associated with them. As I grew older I began to question the societal definitions of the female gender more. When I am in the studio I ask myself these questions. What makes a woman proper? How does this make them a better woman? How does one become a better woman? Is it by becoming more beautiful? What is beautiful? 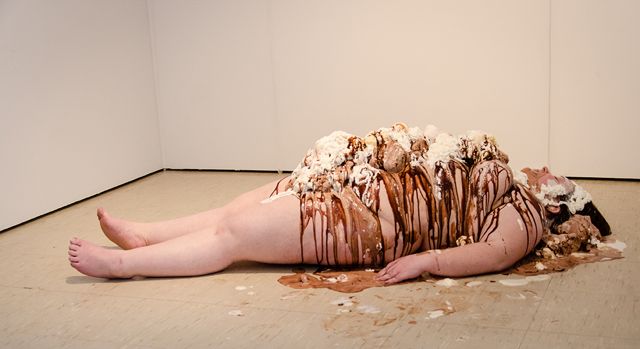 My process of creating art emerges from complex and contradictory circumstances, materials, and objects, and their multiple encounters. My live performances and sculptural works often lead to the creation of supplementary drawings, installations, and videos, to constitute a complex body of work. This method of working is one that doesn’t necessarily keep me in a physical studio. Aspects such as location and process dictate the way I work.

Many of the roles I play as an artist are ones that I didn’t expect to play. Initially, I was intrigued by process and the thrill of making drawings and objects. It wasn’t until I realized that my art could make a statement and promote change, I became open to accepting unacceptable roles of the past. This caused me to take on multiple roles in my work. The first is the role I play is an activist. I use my body to critique constructs of fantasy, beauty, body politics, and gender politics. Second, is the piece itself. A lot of my work involves performance and self portraiture which forces me to be removed from my own inhibitions and become a piece of living art.

I feel more productive working in the morning and I will work through until the evening. I feel that when I start working earlier in the day I am able to think more clearly. Presently, I work in my studio on Mondays, Wednesdays, Fridays and the weekend when I am not teaching. 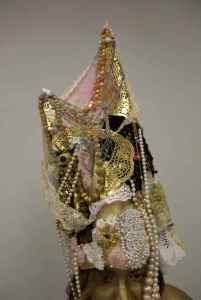 Initially I was a 2D artist working in drawing and painting but when I found sculpture I became enamored with the idea of making tangible objects and creating experiential pieces. As the years progressed I began to introduce my body into my sculptural work until I eventually embraced performance as my primary way of working. Conceptually, I have always been interested in ideas of fantasy, gender, perceived beauty, and the body politic, but the method has definitely evolved.

Writers like Carl Jung and Bruno Bettelheim who write about psychoanalysis in fairy tales have been a very big influence. The writings of Judith Butler questioning the gender binary and Peggy Phelan’s writing on performance art inspired my work. The people who had the biggest impact on the way I make my work are Angela Ellsworth from Arizona State University and Charles Garoian from Pennsylvania State University. Both Angela and Charles are performance artists who have very interdisciplinary studio practices and work in non-traditional ways. Angela taught me how to use the body as a material through endurance and action. She was also an inspiration because she has an ability to work seamlessly through various mediums such as performance, drawing, sculpture and video.  Charles also reinforced similar ideas, but would constantly ask me the question, “What is your work doing?” This question was always one that would make me stop and analyze what I was doing in the studio, and where I was going with the final piece. I would assess the process of making a piece and allow the action of making it influence the final outcome of my work. Charles’ question became one I constantly ask myself as I am producing my work and continues to influence the way I work today.

I would be an anthropologist. I love to read about and research various cultures as well as their stories of folklore and fairy tales. I think having the ability to travel and study these things would be really fun to do, and it would add and enrich my life’s journey.

Katie Hovencamp is an artist who fractures cultural constructs such as gender, beauty, and the body politic to expose, examine, and critique their social and historical assumptions. For some time fairy tales and fantasy have inspired her imagination and curiosity about their effects on women’s roles and the construction of their identities. 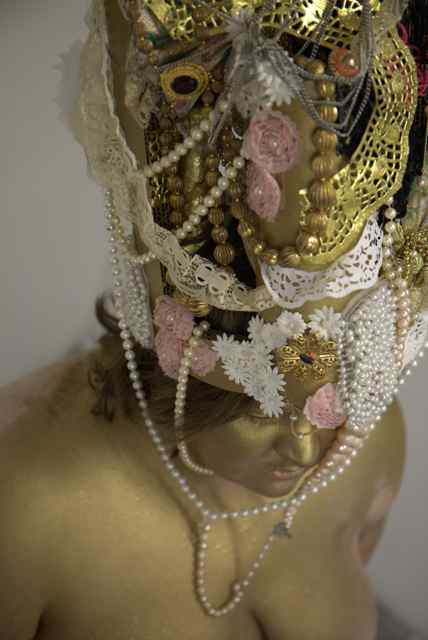 The purpose of this project is to introduce its readership to a diverse collection of art that is being produced at the national and international level. Our goal is to engage the public with information regarding a wide array of creative processes, and present the successes and failures that artists face from day to day. The collaborators hope that this project will become a source for exploring and experiencing contemporary art in all its forms.
View all posts by 365Artists/365Days →
This entry was posted in Performance and tagged Beauty, Fantasy, Feminist, Live Art, Performance. Bookmark the permalink.