Posted on October 7, 2014 by greymattergallery 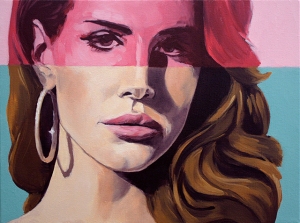 My work examines the consumption of pop culture images through the lens of painting. Referencing promotional photographs and stills from television and music videos, I utilize formal disruptions to examine both the desire and discomfort these images instill in me.

As a teenager, I made a lot of drawings based on pages torn from fashion magazines, and I’ve recently been coming to terms with how much that process—and the kinds of images you seen in magazines like Seventeen and Cosmopolitan—continues to influence my practice. As artists, I think we’re all told at some point not to work from photographs, but as an image maker, I’m interested in the idea of looking at media images, and how their meaning can shift when reiterated and then manipulated through painting.

In many ways I have a traditional studio practice, in that I have to be physically in my studio to apply the paint to the canvas. However, I also consider the time I spend thinking about my work to be an integral element in my act of making. Rather than make preliminary sketches, I write pages and pages of notes, outlining what I plan to make, how I plan to execute it, and what effect I want the work to have on the viewer. Often my best ideas come to me when I make the time to sit and wait for them, but it’s through writing about them and interrogating them that I come to understand how to bring them into the studio.

My older work was very personal, with an implied narrative but no straight forward message, so my shift towards engaging pop culture has come as somewhat of a surprise for me. In my day to day life I try to shy away from pop culture—television, magazines, celebrity gossip blogs—but when something in pop culture does grab me, I’m kind of fascinated by my own interest, and the link it creates between me and so many other people. The familiarity that viewers have with the kind of imagery I use allows for an entry point that I’m really interested in.

After a long hot summer in Portland, I’d say that it’s more an issue of weather than time of day. I go to the studio as often as I can, and stay until the heat becomes unbearable. I’m looking forward to the rainy season and long days in the studio.

Over the last five years, I’ve shifted my focus away from what I personally want to get from the work, and have begun to focus more on the viewer’s experience. This shift has required that I ask myself a lot more questions about how the work functions formally and conceptually. I’ve also made big changes to my palette, allowing myself to explore a lot of premixed colors that my painting teachers always warned against. I’ve fallen in love with cobalt violet, radiant magenta, and quinacridone red, to name a few. At the same time, my interest in faces has remained a constant in my work, and will likely continue.

My mother is painter as well as a portrait artist, and has been an incredible inspiration, teacher, and mentor. I’ve learned a lot from just being around her work, and seeing how her practice has evolved. My recent work has also been highly influenced by the work of Karen Kilimnik and Elizabeth Peyton, both of whom engage pop culture imagery in their work in really exciting ways.

The ten-year-old girl in me says Rockstar, and I think there was a short period of time when I wanted to grow up and be Mariah Carey. I don’t think it would work out—I can’t read sheet music and can barely sing—but there’s something so romantic about being on stage, on the road, writing songs that people listen to alone at night. I love a good love song, the kind that on a deep level says exactly what you’ve been wanting to say. I don’t see the rockstar lifestyle meshing with my relatively early bedtime, but I hope that my paintings can be like songs, the ones that stick with you long after the music stops playing.

Anya Roberts-Toney is a multidisciplinary artist working primarily in painting. She received her B.A. in Visual Art from Brown University in 2006, and her M.F.A. in Visual Studies from Pacific Northwest College of Art in 2014. Her work has been exhibited in California, Minnesota, New York, Oregon, and Rhode Island. She currently lives in Portland, OR. 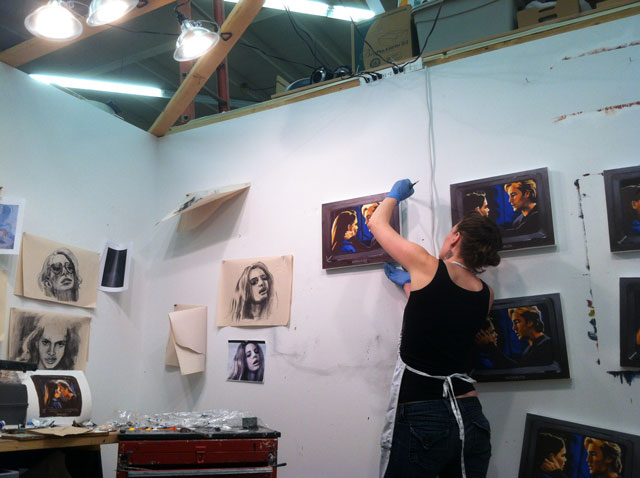