Posted on June 25, 2014 by greymattergallery

I create paper cuts that often foreshadow tragedy and despondent, melancholy characters in a whimsical way using a mix of Victorian and mythological themes & fables.

I have always tried to creatively express myself, but it wasn’t until I became friends with an art therapist named Erin Blustein in 2004 that I gave it much serious thought. The idea of therapy through art was completely unknown to me. She introduced me to several Chicago artists and also how to view and think about art as more than just a static piece of work. Both she, and those people encouraged me to step out as an artist at that time, but it wasn’t until 2011 when I was approached to do an album cover that I had the confidence to actively pursue it.

I grew up in southern New Mexico surrounded by open desert, barren mountains, and chili pepper & cotton farming. There were not many other kids to play with so I spent a large amount of time alone. I realized later in life that the things I did in my youth to pass the time (hopping a train, exploring abandoned mines, catching poisonous insects, etc…) could have had potentially tragic endings, and they just never did.

Not all, but a large portion of my work represents often ignored children making bad choices or being the victim of unfortunate circumstance while alone in nature, frequently with animals in attendance. 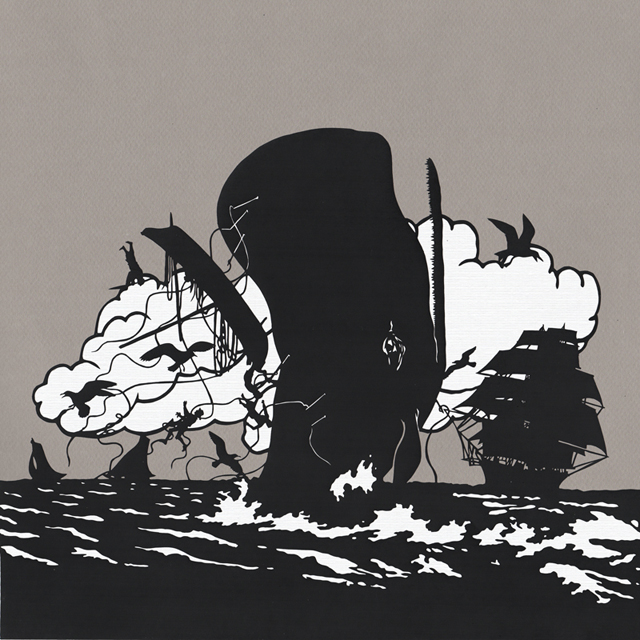 For me, the image doesn’t work if it seems obvious or plain. Anyone can create shock imagery and that is something I want to avoid. I try to create an image that will be perceived differently after a few moments than the initial thought you may have given it. Each piece obviously has a meaning to me, but I prefer it when people find their own meaning and interpretation. Paper cuts make this possible because even though they have quite a bit of detail, at the same time they are silhouettes that lack details like expressions and texture. Is the character happy or forlorn? Is that someone drowning or an apparition? Is she holding a carrot or a knife? (it was a knife)

My color palette is also important to me. I tend to gravitate towards muddy tones accentuated with reds and oranges with the featured paper cut in black. Even though I do want people to find their own meaning, I don’t want to hide that what is featured is most likely not a ‘rainbows and sunshine’ situation.

I do not have a refined process. I try to always begin by designing a character and developing a scenario around them. The scenario can change day to day depending on my moods or environment and even by accidents with appealing results. 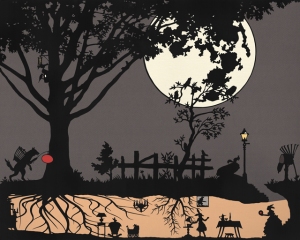 I am motivated by music, lyrics and art. You could argue that all of those are art and I wouldn’t disagree. I can cut out finished designs in any environment, but I can’t create the designs without music.

I am also heavily influenced by nature and how I perceive it when it crosses my path. I love how chaotic nature is; the feeling that anything can be a victim regardless of preparation. Just looking out the window can be motivational. The other day I saw a woodpecker eating insects out of a spider’s web as they would get caught and I couldn’t help but be inspired by how nature encourages unconventional behavior.

My exposure to art as a child was seeing my dad emulate Frederic Remington in drawings and Zuni patterns on ceramics and the home crafts of my mother. My dad can sketch a windmill and horse like nobody’s business and my mom can seemingly make anything worthy of display out of found objects. I don’t know if this was an influence as much as it was teaching the fact that being creative is something that anyone can do.

If I had to name some more well-known influences of mine, I think the top of the list has to be Hans Christian Anderson. His stories and paper cuts are favorites of mine. Other top influential artists would be, Louis Wain, Edward Gorey & Lotte Reiniger.
Contemporary artists that have become influential in my work are: Marion Peck, Diana Sudyka, Emily Winfield Martin, Katie Gamb, Elsita Mora, James Jean, Yoshitomo Nara, Emmanuel Jose, Billy Childish, & Mark Ryden.
I would also say that the artists I have met and become friends with have certainly influenced me in direction and presentation, particularly erica jane huntzinger, Zak Worth and Byron Gin.
I am also heavily influenced by turn of the century through late 1950’s children’s books.

I spend a lot of time bird watching (or just any creatures around my yard). I also love hiking. The waterfalls area around Pembine, WI and most Wisconsin parks along the Niagara Escarpment are particular local favorites. I also enjoy seeking out still functional steam trains as well as seeing live music.

I was born in Santa Fe, NM and grew up in Tesuque and Las Cruces, NM just north of the border with Mexico. After graduating high school I studied geology at NMSU, but spent most of my time involved with the campus college radio station as a DJ and the assistant program director. In 1994 I had the opportunity to leave New Mexico for Chicago, IL with a friend who needed a roommate. I spent most of my time in Chicago seeing live music and forging lasting friendships with musicians and artists and working in random record stores and a garden center to pay the bills. After 14 years, I decided to move north to the Sheboygan area of Wisconsin to take advantage of affordable land and a more relaxed lifestyle. I live in an old farm house on 6 acres with my three cats where we watch birds, bunnies, woodchucks and the occasional fox taking advantage of my crumbling 19th century cheese factory and unkempt yard where they live out their lives. I try to be just as entertaining for them.

My work has been featured on albums covers for the 2006 release “the Titmice – Kind Of Black EP”, the 2011 self-titled release “Billy Blake & the Vagabonds ” and on the 2013 tour poster for “Kelly Hogan’s 2013 Midwest Tour”. I have been a featured artist for the Waxwing’s 2013 Fall Art Opening, The Victory Garden Initiative’s 2014 Fruity Nutty Affair, and the Waxwing’s 2014 2 Year Anniversary Show.

This entry was posted in Uncategorized and tagged #paper, folklore, silhouette, Wisconsin, wistful. Bookmark the permalink.