Posted on August 22, 2015 by greymattergallery

I primarily use found materials such as old maps, repair diagrams, schematics, pages from old books, and anything with a kind of history inherent in its form to paint, draw and collage over creating multi-layered illustrations where seemingly random juxtapositions of visual information create distinct and unexpected relationships. My primary focus is in illustrating books and classic literature, taking what are at times abstract themes and ideas and giving them visual form. I actively avoid any kind of technological or digital method in creating art, and I feel that it is essential to see the hand of the maker in the work. Rather than obsess over polish and detail, the chaotic and disruptive aspects of the creative process, from stains on the paper to visible pencil outlines to unexpected elements of text and pattern showing through my paint and ink, add an essential and vital element to the work.

I was the first child, born into a home full of books and readers. Even as a child in the 1970s, television and film were secondary to books, art and illustration. Books were everything from information to entertainment to art objects, and this great love for books and for the printed page became an essential part of my identity and my aesthetic. It wasn’t long before I discovered comic books which were to me the purest synthesis of image and text imaginable. I am old enough to remember a time when comic books occupied an unsavory and slightly dangerous corner of the world, and after internalizing, struggling against, and ultimately vanquishing the self-loathing brought on by that idea, I’ve come to relish the idea that the most powerful, visceral and provocative art can come from these unexpected, culturally trashy gutters of the art world.

I’ve had differing experiences with the studio environment, but that has distinctly shaped what I want from a work space. From October 2009 to January 2011, I created one illustration for every single page of the novel Moby-Dick at the rate of one piece per day. My “studio” during that time was a walk-in closet that measured approximately 4 feet by 7 feet. There was just enough room for a drawing table and chair, a small bookshelf full of art supplied, paint and old books, and a lamp. At that time, I was commuting nearly 3 hours a day and working every spare second on the Moby-Dick illustrations so the studio was simultaneously a prison and a protected space. When inside that tiny room with the closet door shut, there were no windows, no sounds, nothing at all to even make me aware of the passage of time or the world outside. In some ways, it was quite literally like the cabin of a whale ship, or being in the belly of the whale. That deprivation, solitude, and isolation was essential in driving me forward through the obsessive project of illustrating 552 pages of Moby-Dick. Since then, I’ve moved into a much larger space and the studio is now a second bedroom with a large window, several bookshelves, a computer and scanner, and a television. While it has been comforting and even luxurious to have those amenities, it took me far longer than I am happy admitting to get back to my old disciplined work habits. Strangely enough, I miss that tiny little prison of a closet, and I think I work best under conditions of isolation and deprivation.

I had been making art since childhood, and I had been taking the idea of making art very seriously since my late 20s. Despite some attempts to self-publish my work and to get my work into some Ohio galleries, I had been met with indifference at every turn. The lack of an MFA or BFA seemed to be an almost insurmountable obstacle in terms of galleries, and my work seemed a bit too obtuse for any publisher to consider. I had just turned 40 years old in June 2009 and decided that I was simply going to quit making art. I had a fulfilling career as a librarian and a rich and rewarding marriage to an amazing woman. However, I found myself completely unable to contemplate a life empty of the practice of making art. I agonized for 2 months and in early August 2009 decided that if I was going to quit, I would go out on top. I had been obsessed with the novel Moby-Dick for most of my life, so I decided almost in a flash to create one illustration for every page and to make, for myself alone, the perfect illustrated edition that I had always seen in my head. And that was going to be the end of the story. Strangely, after over a decade of total obscurity, the Moby-Dick work struck a chord with people and the blog I started in order to share the work gained more and more visibility in a remarkably short period of time. Before I was even halfway through the 552 illustrations, I had an agent, a publisher and a book deal. Coming through that experience and emerging on the other side, I was forced to come to terms with the fact that I had gone from obscure outsider working on his last project to professionally published artist and illustrator with new opportunities facing me. It’s still not always a comfortable fit.

Discipline, routine and ritual have always been essential to my process, perhaps because of the obsessive-compulsive nature of my projects. Freedom can be toxic to me because it diffuses the will and makes focus more difficult. I work Monday through Friday from 9 to 5, so after dinner and taking care of whatever I need to do for the day in terms of mundane responsibilities, I work in the evening, often for many hours, and generally right until it is time to sleep. Making art has, for me, always been a product of momentum, and I find that even taking one evening off tends to slow that momentum dangerously. It can become almost frantic at times, and I feel as if I am constantly tending an engine on the verge of giving out, but slowly the momentum builds until it becomes almost impossible to not make art every night.

Prior to beginning work on the Moby-Dick illustrations, I had only experimented with the practice of painting and drawing on old maps, diagrams and pages from books a few times and with decidedly mixed results. At one time, I was obsessed with having total control over every square inch of space on the paper, and I felt an impossible to resist compulsion to fill every bit of that space with details and color. The act of making art had become both physically and psychologically rigid and uncomfortable, so the decision to begin painting and drawing on paper that already contained visual information was a kind of creative destruction. I knew I had to quite literally and quite violently shatter my previous practices and learn new ways of making marks on paper, and relinquishing that obsessive control, allowing the texts or lines or information on the paper that I was painting on show through my work in random and unexpected ways was a revelation. Over the last 5 years, I have found myself reverting back to that mad need for control and obsession with detail more often than I am happy admitting, but the use of found paper is steadily becoming a more comfortable fit for me so I think that change is here to stay.

Growing up in a home full of fantastic illustrated stories was an essential part of my foundation. My parents really valued reading, and not just for informative or educational reasons. Their passion for books and art created in me a sense of wonder at art and fantasy, and that sense of wonder is the primary engine of my obsessions. Additionally, I can remember almost everything I have ever seen…from Jack Kirby comic books to Final Fantasy video games to Ray Harryhausen movies to Roger Dean album covers. All of those images, for over four decades, have been accruing in my mind in some kind of vast and constantly mutating database. All of this imagery is what I draw on, consciously or subconsciously, when creating my own art and I can see echoes of my entire life in every piece I create. So in that sense, my art is simply an external visual memory of my life. 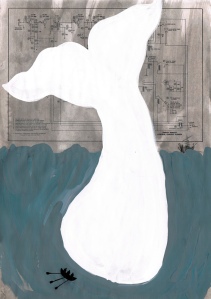 Although I have enjoyed some recent success as a professionally published artist and illustrator, making art has always seemed so natural, essential and intuitive to my identity and existence that I never even once considered pursuing it as a career or a means to pay the rent. That’s difficult to explain because so often we are told “Do what you love,” but it just never occurred to me to do it. Books and literature have been the through-line in all of my careers, from my days as a high school English teacher to my time working at several bookstores to my current vocation as a librarian. I’ve never felt the compulsion to try and become a writer of any kind, but as long as books are involved I could easily see myself in any number of book or literature related fields.

Matt Kish is a self-taught artist and a librarian. He lives in Ohio with his wife, their frog, and far too many books. His art, shaped by his reading habits and his personal obsessions, functions as an external memory for him and is how he records and orders his life. His primary media are found paper which is often scavenged from old books, cheap acrylic paint, and ink with occasional ballpoint pen and collage.

This entry was posted in Uncategorized. Bookmark the permalink.