Posted on December 16, 2014 by Artdose Magazine 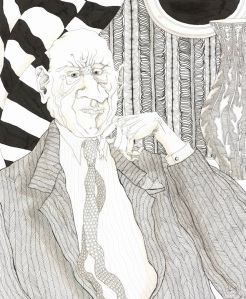 I was homeschooled and visited many museums from an early age.  My parents encouraged me to draw to keep me occupied in museums, and in general whenever I had to wait for them before I was old enough to read.  I was a ballet student for many years; that has been important both to my drawings and to my ambition to design costume and sets.

I live and work in rather cramped quarters at present, so being in my studio means being at my drawing desk.

I had the opportunity to draw from cadavers, and the beauty of the interior organs has been an important revelation for me. I have done some wallpaper and fabric designs.

I work when I am not at my day (my very early morning until mid-afternoon) job.

Chloe Feldman Emison has shown her drawings widely in the United States and Europe, while also making animations (stop-motion) and illustrations. She studied fine art at Williams College and at the Ruskin School of Drawing and Fine Art, Oxford University, and animation at Forkbeard Fantasy in Devon. She was a visiting artist at Wasps Studios in Glasgow, and completed residencies at the Contemporary Artists Center in Woodside, N.Y., at The Old School Art House in Iceland, at the Vermont Studio Center, and at Can Serrat, near Barcelona. In 2013 she taught animation at the Eagle Hill School in Hardwick, Massachusetts. She has collaborated with the Elements Contemporary Ballet company in Chicago on the design of a new ballet about Atlantis slated for 2016. She was named the Mixed Media Artist of the Year for 2009 at the Cambridge Art Association, won a Spotlight on the Arts Award for Outstanding Emerging Artist in 2010, and a Board of Trustees Award from the Silvermine Art Center in New Canaan, Connecticut (2014).

About Artdose Magazine Founded in 2013, Artdose Magazine is an independent print and digital art magazine committed to connecting and supporting the visual arts in Wisconsin. Published by Frank Juarez, the magazine is premised on the belief that we all share common goals of introducing, engaging, and offering others diverse art experiences. Artdose appears in print as a bi-annual art magazine, through a weekly art e-newsletter and on Instagram and Facebook. About Frank Juarez Frank Juarez is a former gallery director, award winning art educator, artist, author, and arts advocate living and working in Sheboygan, Wisconsin. Organizing local and regional art exhibitions, community art events, facilitating presentations, supporting artists through professional development workshops, use of social media and networking has placed him in the forefront of advancing and promoting local artists and attracting regional and national artists to collaborate, network and exhibit in Wisconsin.
View all posts by Artdose Magazine →
This entry was posted in Drawing and tagged ballerinas, Boston, gold leaf, pen and ink, works on paper. Bookmark the permalink.