Posted on December 11, 2014 by Artdose Magazine

Much of my work is concerned with social inequality along both national and global fronts. My imagery explores the historical context for violence against humanity, in its many forms, with special attention to the plight of women and children.  Through research, I engage with the past and use my art to give a public and present voice to those whose voices have been silenced. Although I am well known for my collage-based work, I implement a wide variety of media to manifest my work.  My work is rarely conceived as a single piece, but is instead imagined as an entire body of work around a central theme, such as the 32 pieces in my latest produced show Hooded Truths (2014), which also includes installation and performance.  My practice is very socially engaged, personally, in my interaction and collaboration with other artists, and politically, in my activism through my work.

Daughter of a mathematical genius and a fifth grade teacher, my parents created a safe haven in which I could grow and create. We traveled throughout Europe, most of the United States and parts of Northern Africa before I was ten. Knowing the Louvre at eight and the great cathedrals of Italy left an indelible impression of beauty and doing. 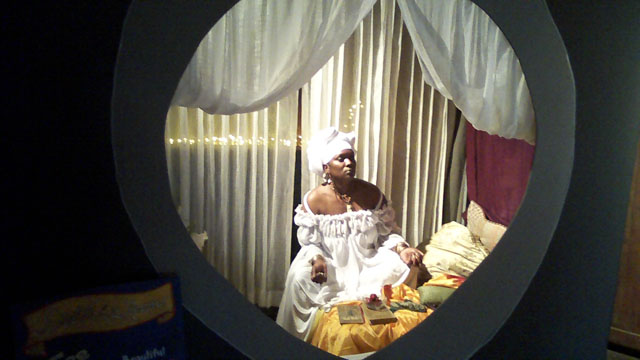 My studio for the past eighteen months has been solely that. It is also the epicenter of my social life – often I post open hours for friends/collectors/guests to spend time with me and whatever new project I might be working on. My day in the studio typically starts before eight a.m so that I can take full use of the natural daylight and usually work through two or three in the afternoon.

I resisted the title, ‘activist” for many years, but have finally started to claim that title as well as visual artist because it is what I do.

My day in the studio typically starts before eight a.m so that I can take full use of the natural daylight and usually work through two or three in the afternoon.I work four to six days a week.

I am a collagist, but it is in how I treat that medium to create the statements I make that changes.

My grandfather who was a groundbreaking politician, my mother who was afraid of being an artist, the last Emperor of Ethiopia – Haile Selassie, and folk singer Vance Gilbert.

Candace Hunter, a native of Chicago, studied the plastic arts and performance arts at Barat and Mudelein Colleges in the Chicago area. Her early work was what she coined, “non-traditional batik”. Always affronted by the Euro-male created lines of the validity of “art” and understanding that batik was considered either a “folk” or “craft”, Hunter took it to another level that matched the parameters of the Western idea while leaning on the technique and creative force of the African perspective.

A child of formally educated parents – a mother with wanderlust, a COBOL speaking father, Candace traveled throughout Europe and northern Africa before the age of ten. Seeing the wee small girl in the corner of the enormous “Watchman” at the Louvre, the foot of the pyramids and the ceiling of the Basilica in Rome at such an early age, cemented the idea of beauty, grandeur and of service.

Hunter, in her work, has most often creates worlds in which she honors family, sacred text, justice and, water scarcity. She often works in series. “Ethi-Oh-My!”, spoke to her love of Ethiopia and Selassie, “Prayer Circles: Sacred Text and Abstract Thought” invited disparate communities to examine art together, “Dust in Their Veins” continues to enlighten audiences on water scarcity and its dire effects on women and children globally, “Hooded Truths” places the ubiquitous modern hoodie on many unspoken American truths and lately, “Loss/Scape” – which attempts to create a visual understanding of loss.

work in progress, “Loss/Scape” in my studio with previous series work in the background.

Founded in 2013, Artdose Magazine is an independent print and digital art magazine committed to connecting and supporting the visual arts in Wisconsin. Published by Frank Juárez, the magazine is premised on the belief that we all share common goals of introducing, engaging, and offering others diverse art experiences. Artdose appears in print as a bi-annual art magazine, through a weekly art e-newsletter and on Instagram and Facebook. We have expanded regionally effective July 2022. About Frank Juárez Frank Juárez is a publisher, former gallery director, award winning art educator, artist, author, and arts advocate living and working in Sheboygan, Wisconsin. Organizing local and regional art exhibitions, community art events, facilitating presentations, supporting artists through professional development workshops, use of social media and networking has placed him in the forefront of advancing and promoting local artists and attracting regional and national artists to collaborate, network and exhibit in Wisconsin.
View all posts by Artdose Magazine →
This entry was posted in Collage and tagged African American, Black Art, Chicago, Injustice, Woman Art. Bookmark the permalink.