I am a lens based maker, mostly motion images, and sometimes performer.

Growing up in the back yard of an oil refinery, films backlit and fired my imagination, gave me a world outside my reality. I don’t think I have ever stopped having a piece of my consciousness occupied by the cinema. It was an escape for my entire family, and I find even now that we are more likely to discuss films and issues within them than our own lives. So maybe I have always been on a quest to explain something about myself via moving image, to arrive at a voice or truth within the work.

For my workflow, keeping a studio is much more about an editing station, a place for equipment, small camera tests, etc. I have found that adding tactile processes into my practice when possible is of great value to me, and goes back to my experimental filmmaking roots where the materials are so much a part of the process. I still love to work on and manipulate celluloid when possible. Really anything to step away from a computer screen while staying in a creative space. Shooting can be many things, but rarely is it in a “studio” atmosphere for my work.

I began as a filmmaker, so the fine art world where objects inherently have a possibility of visual value was new to me. It was through knowing painters, sculptors and people who make performance work that a holistic idea of visual communication and presentation became real to me.

There is no good time to make work. It must be done, it has its own demands. I think the pervasive “do what you love” attitude toward art is absurd. Sometimes I don’t love it – I am completely at odds with production, but I do it anyway, because it is what I do. It’s not always about pleasure. I mean to say that there is an attitude out there that an artist must choose to make time to do work to be happy, to fulfill a dream, etc. I feel like that is a false sense of process for many. I must make the work because I will be crazy if I do not, I will be demonized by my own thoughts if I don’t move forward. The work does not make me happy, it allows me to exist.

I am the sort to be taken by surprise by the nature of things on a fundamental level. No matter how I research, write and brainstorm new material, there are threads that seem to weave their way into new work that are pieces of the old.

I would be nowhere without my often collaborator Holly M Lewis, a magnificent writer. Friends that have made strange journeys for no reason other than to see with me, and maybe take some pictures, or show some pictures, or step in the frame. Every actor that tried, really tried, especially the bad ones.

I would hope that if I had ever had a good answer to this question that I would have put that slipper on the foot awhile ago.

Bug Davidson is a motion image artist and film director. Their most recent film, Nothing Like Ivanhoe, premiered in a sponsored screening by Polari Festival’s filmmaker assistance program. Davidson received the Puffin Foundation Grant to continue ongoing lens based performance work, Rule of Three. Bug has studied at the School of the Museum of Fine Arts Boston, Tufts University, The School of Visual Arts and The Irish Film Center Dublin. 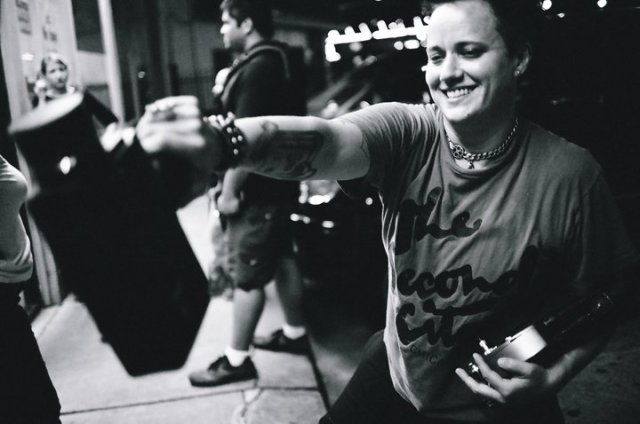 Frank Juarez is a gallery director, award winning art educator, artist, author, presenter, and arts advocate living and working in Sheboygan, Wisconsin. Organizing local and regional art exhibitions, community art events, facilitating presentations, supporting artists through professional development workshops, use of social media and networking has placed him in the forefront of advancing and promoting local artists and attracting regional and national artists to collaborate, network and exhibit in Wisconsin.
View all posts by Frank Juarez →
This entry was posted in Video and tagged Austin-Texas, Film/Video, Moving Image, Video Art. Bookmark the permalink.