Posted on October 24, 2014 by greymattergallery 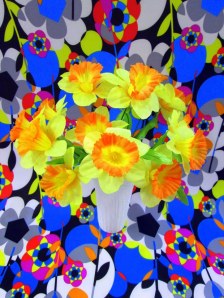 Can You Dig It? A Chromatic Series of Floral Arrangements (Yellow), digital print on metallic paper, 30″x40″, 2014

I am interested in exploring ideas related to beauty, popular culture, and kitsch. Can You Dig It? A Chromatic Series of Floral Arrangements is a series of photographs taken of floral arrangements that I have created. This series consists of ten 30” x 40” digital photographs printed on metallic paper. Part of my artistic practice is collecting objects to photograph from 99 cents stores. These ‘fake’ flowers used were gathered from various 99 cents stores found throughout New York City and New Jersey. The backdrops are made out of polyester spandex. Creating each picture has been fun. Quite often, I am surprised by how an arrangement translates into a photograph. These photographs challenge notions related to what is natural and artificial, what is considered to be beautiful and what is considered to be tasteful. By using a low tech camera and lighting, I address this concept of high/low art and the idea of the well-crafted photograph.

I have a degree in painting from the Parsons School of Design where I studied with Sean Scully and I have a Master’s degree in combined media from Hunter College where I studied with Robert Morris and Rosalind Krauss. I realize that my work is greatly influenced by Pop Art. Let me explain. When I was about three or four, I went with my family to see a Pop Art survey show at MOMA in 1967. I can recall my parents pointing out a sculpture of French fries and a painting of a piece of cake. When I got back home to New Jersey, I painted a picture of a piece of cake with a cherry on top. I thought it was great that you could look at everything as art. I still believe this notion to a certain degree. Of course, now, I acknowledge the layers of complexities of meaning(s) that create Western culture on both a personal and larger field. 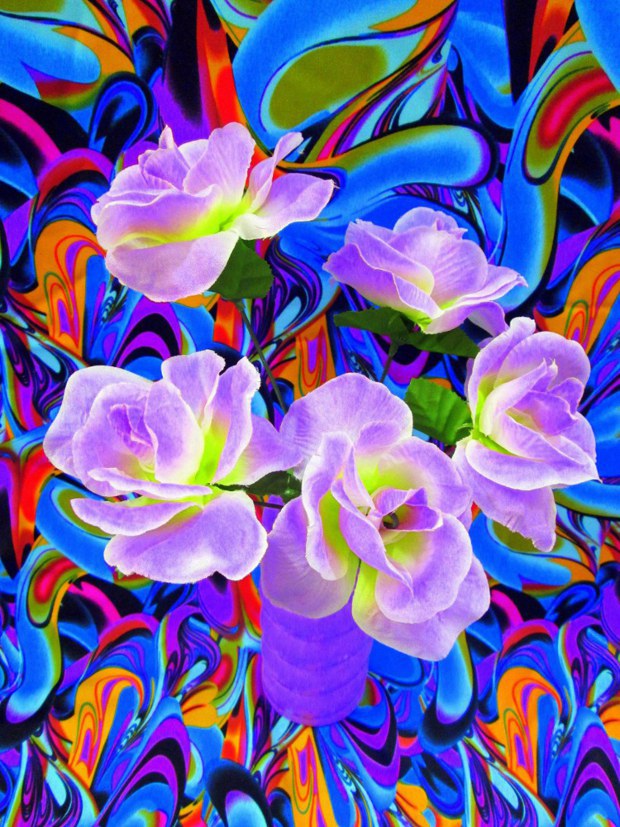 Can You Dig It? A Chromatic Series of Floral Arrangements (Purple), digital print on metallic paper, 30″x40″, 2014

I have worked collaboratively in the past and can appreciate that type of work. Currently, I am an artist in residence with chashama at the Brooklyn Army Terminal. It’s great to be around such creative energy. Still, I have to say that I have moments when I want to be alone in my studio. I am the proud owner of 3 camping chairs (the ones with the cup holders in them)! I find that when I’m in my studio, I sit on my chair, think, daydream and drink a lot of Diet Coke while imagining what I’ll do next when I get up from my chair!

That’s an interesting question. When I was younger, I didn’t think about myself as an artist beyond my own art making process. (Boy, I’m a true narcissist!) I wasn’t super into self-promotion etc. I just wanted to make my art. There is still a part of myself that is encapsulated in that creative bubble. I truly feel connected as a person when I’m involved in my art making process. Now, though, I want to share my work with an audience and see how it fits into a larger global context. I’m a believer in the concept that art is about ideas and that discourse and sharing your work, promoting dialogue etc. about art/culture continues to promote growth in a society. I would now like to thank social media and its part in promoting this exchange of ideas! Thanks to the ‘Interweb’! 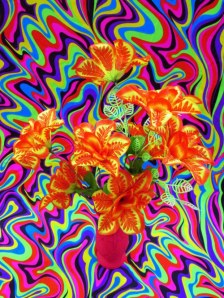 Can You Dig It? A Chromatic Series of Floral Arrangements (Orange), digital print on metallic paper, 30″x40″, 2014

I am definitely a night owl. I can procrastinate pretty well. If I work late at night, there’s nothing but myself and the wee hours of the morning so I feel like I have to focus. But I will say, if I have a deadline or a show coming up, I’m up early, too.

My work hasn’t changed that much in the last five years. I still scour the 99 cents stores for inspiration. I will say, however, that I’m trying to push myself and take more ‘personal risks’ in my work than I ever before.

Hands down, my sister Nancy is a huge influence. She’s an art historian and the smartest person I know. I feel like I can discuss my art ideas and all ideas with her. We spend a lot of time together looking at art. I also listen to tons of music. I can name what music has influenced certain work. Right now, I’m totally into Jerry Garcia and can’t stop listening to the Dead. Also, I’m completely obsessed with BRAVO TV and all of the Real Housewives shows!

I’m an educator. I teach Critical Thinking for the City University of New York at a local community college. I love teaching and the exchange of ideas. Being an artist and an educator is exactly why I value living in a free-thinking society. 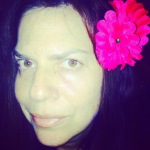 Melissa Eder is an artist who creates photo-based projects that explore notions related to female identity, popular culture and kitsch. Ms. Eder received her B.F.A. in painting from Parsons School of Design in New York City where she studied with Sean Scully and a M.F.A. in combined media from Hunter College in New York City where she studied with Robert Morris and received a Meritorious Award from the Alumni Association. As a visual artist, her work has been shown nationally and internationally in such venues as the Bronx Museum of the Arts, New York University’s Broadway Windows Gallery, Art in General, the Aperture Foundation, the Parlor Gallery, the Charlotte Street Foundation’s Paragraph Gallery in Kansas City, Missouri and in Stadtlengsfeld, Germany where she created a permanent art installation in a former kindergarten. She was an artist-in-residence at the Henry Street Settlement in New York City, the Saltonstall Foundation in Ithaca, New York and the Atlantic Center for the Arts in New Smyrna Beach, Florida as selected by photographer Graciela Iturbide. In 2011, her work was selected by Eric C. Shiner, the director of the Andy Warhol Museum for his curated exhibit on CurateNYC. Her work was also chosen by Sarah Hasted for Photography Now, 2004, for the Photography Quarterly, Woodstock, New York. Her photo book “Can You Dig It? A Chromatic Series of Floral Arrangements” was included in a group show at the Davis Orton Gallery in Hudson, New York. During the summer of 2014, her work was included in the Aperture Foundation’s Summer Open and was chosen from over 860 applicants. She was selected to design a piano for the public art project for Sing for Hope during the summer of 2013 that was displayed at Lincoln Center. She has received numerous grants including funding from the Puffin Foundation and two Manhattan Community Arts Fund grants from the Lower Manhattan Cultural Council. Her work has been reviewed by the New York Times, highlighted in Feature Shoot, Co Design, the Collector Daily and various other publications. She lives in New York City and works in Brooklyn as an artist in residence through the chashama studio residency. She was born in Long Branch, New Jersey on October 8, 1963. 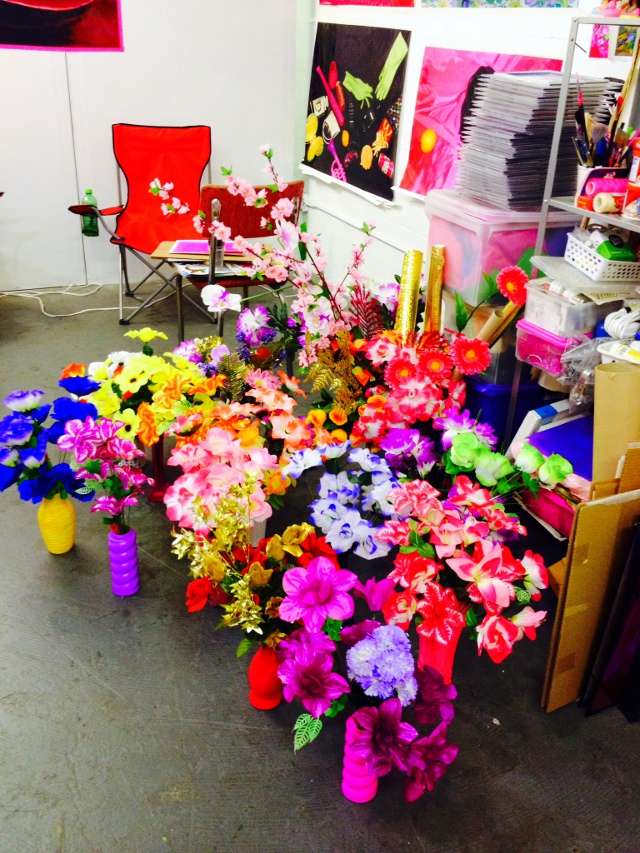