Posted on October 19, 2014 by greymattergallery

The way I think about my paintings is that I use the vocabulary of the human form – the colors of its flesh, its contortions and protrusions, its extensions,curves and crevices – as the components from which I develop my subjects. I’m interested in how we present the body and the human image when we try to pin it down in a still, two-dimensional image – particularly in painting – and how it becomes more complicated the less straightforward it is.

Every summer of my childhood, my family would take a long road trip around the US, visiting National Parks, historic landmarks, geologic wonders, distant relatives, and going down countless unknown roads. My parents encouraged exploring, seeing new places and being interested in how people do things differently from me, and this has given me a curiosity and openness to the unfamiliar. I was also always encouraged to pursue the things that interested me – music, reading, writing, art – so I have grown up feeling empowered to go after my inclinations.

My studio is definitely the place where I, as an artist,  toil away alone in a room. It’s the space I go to work-  away from everyone else – that is completely governed by me and only me. This is both incredibly electrifying and gives me comfort, which allows it to be a place I look forward to going to. The toiling comes in with the challenges I give myself with the work – I often work on several paintings at once, each with a different problem or approach I am tackling, and usually with a variety of scales. If I ever get stuck or need some time away from a piece, I will always have something else to work on so I can stay productive, while also taking my time.

I’ve always had more roles that interest me than I can actually fill, so I am still working on attaining all I envisioned I would do as an artist.

Right now I have a routine which I’ve found works really well for me. I split my time between my “day job” (which at this point I still need for income) and working in my studio. Luckily I’ve been able to work it out so that I can be in the studio 5+ days a week, for a decent amount of time. I strategically took a day job where it is geographically easier to go to my studio than home so going to the studio after work (and avoiding traffic) is always the better option. I find that I am much more productive if the decision to be at the studio has already been made, and once I’m there I can’t help but want to work. I think a key component of having an art career is making the time in the studio the priority, regardless of being in the mood or how many other things are competing for your attention. 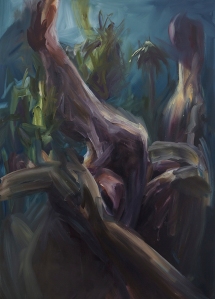 It has changed significantly. When I first became interested in working with the portrait, I headed (no pun intended) in a very representational direction where I relied heavily on photographic references. I think this was an important phase to go through because I gained many skills for capturing an accurate likeness, but I realized the work was lacking in the singularity I could bring to it if I allowed myself to follow my instincts rather than a source. So, my paintings have moved away from specific references to being developed through the undertaking of painting. The forms I am working with now are highly invented.

I am often occupied by a good book and cup of coffee, so I would take that as an occupation.

Virginia Broersma (b. San Diego, CA) received her BFA in Painting from the Savannah College of Art and Design in Savannah, GA in 2004. Recent exhibitions include a solo show at Autonomie in Los Angeles, CA and Fermilab Art Gallery in Batavia, IL and group exhibitions at the Museum of Art and History in Lancaster, CA and at JAUS, Autonomie, and with 5790projects in Los Angeles, CA. Upcoming exhibitions will include the Yokohama Triennial and  a group show that will be traveling to the Palazzo della Provincia de Frosinone in Italy, the Oceanside Museum of Art and the Riverside Art Museum in Southern California. Broersma has been the recipient of a several grants including funding from the California Institute of Contemporary Arts, the Puffin Foundation and was awarded a Community Arts Assistance Program grant from the City of Chicago, IL, which she received in both 2010 and 2011. Broersma currently lives in Long Beach, CA. 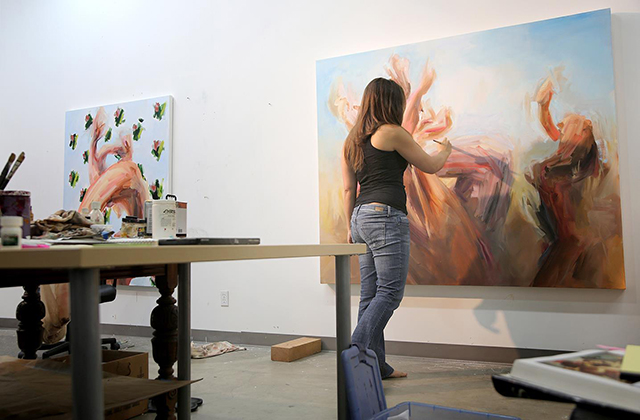 Broersma in studio by EMS

This entry was posted in Uncategorized. Bookmark the permalink.