Posted on August 28, 2014 by greymattergallery

Briefly describe the work you do

I develop my work one collection at a time, based on empirical experiences. My observations—both internal and external—are examined within specific conceptual frames. Though my pieces hone in on intimate scenes, I expect the final work to transcend itself. It is important that what I make is as universal as possible, that it is inclusive and accessible. I craft objects that speaks to a wide range of people, from the refined art connoisseur to the person on the street.

As I make art I create my own narrative, which allows me to grasp realities that otherwise would pass by undiscerned or even noticed. Just like art helps me to find meaning and be aware of my surroundings, I expect my work to nudge viewers to be conscious of theirs. My work functions as a catalyst for social experiences when it builds bridges where they have been severed. I feel accomplished when onlookers react to my installations by reflecting on their own experiences that they articulate and exchange with others. Their stories then become part of a meta-narrative that is new and transformative.

I have been making images since I was very young. Despite having a number of artistic family members—a musician and a sculptor, among others—I never considered making a living from art. I knew I wanted a future that would be meaningful, fulfilling, and have an impact, so I pursued a teaching career. I studied and eventually taught both philosophy and theology. Throughout those years, I developed as a self-taught visual artist in my spare time. I learned to paint by looking at art books and scrutinizing techniques. Since then, art has served me as a suitable vehicle to express and communicate otherwise abstract concepts. My training in the MFA program at the Museum School reinforced my skills, as well as broadened my vision of the role of an artist in today’s world. The challenge for artists is not much different from many academic disciplines that pursue making sense of the world. Now I am engaging in both endeavors: I make art and teach studio art at Boston College.

Questions about social identity are intrinsic to who I am as a person. Being Chinese from a South American country prepared me well to face being a foreigner here in the US. Since I arrived in 2001 I have noticed a dichotomy in people’s behaviors—including my own. We might be physically present as we pass through malls, train stations, supermarkets, airports, and so forth, while emotionally and psychologically we are absent. I thought at first that my experience was conditioned by my “alien” status in American soil. However, after doing research and interviewing different social groups—nationals and internationals, male and female, young and old—I have come to the conclusion that my experience of aloofness in public spaces is a global phenomenon linked to modern societies. In this I found a meaningful and vast resource for my work.

In tandem with my cultural background, my academic one is always present in my art practice. I have a Master’s degree in philosophy and theology; they have predisposed me to question and be critical of reality. It is natural then to correlate my personal experiences with notions I have gathered in those disciplines. I usually toy around with Heidegger’s understanding of experience of being, Nietzche’s description of eternal recurrence, and Tillich’s view of the situation of our times. These might not be explicit in my artwork, yet they heavily inform it. For instance, having Hegel’s dialectical method in mind, in my painting I juxtapose warm vs cool palettes, vigorous moments vs quiet ones, interiors vs exteriors, traditional vs inverted perspectives, and so forth. My goal is to expose viewers to these contrasts and dissonances. It is up to them to make a synthesis, to use Hegel’s nomenclature.

What types of conceptual concerns are present in your work? How do those relate to the specific process(es) or media you use ?

My current work elaborates on issues of identity as a social construct. Our sense of individual is formed by the interactions with other people and the spaces we inhabit. We are not beings in a vacuum, but rather in milieus of shared experiences and narratives within a specific context and time. As we build our identity in post-modern settings, many factors and filters are at play. Social status, political ideologies, gender, religious beliefs, and ethnicity are some of the social paradigms through which we reach out or alienate others.

I recently developed a collection based on plexiglass. Many public spaces feature plexiglass in the form of windows, wall separations, advertising panels, shop displays, and signs. I use this material to metaphorically represent the reality that it creates by stressing what it signifies. While it is employed to organize and divide spaces, its transparency in my work connotes the invisible filters that mediate our social behaviors and interactions.

The visual information offered fragmented on multiple layers of plexiglass urges onlookers to make meaning of the whole. Different views provide juxtapositions of figure and ground, flatness and depth, while simultaneously highlighting the physical emptiness between surfaces. By depicting seemingly banal scenes on plexiglass, I encourage viewers to reflect upon the multiple levels of meaning often overlooked as we navigate an increasingly complex modern world. 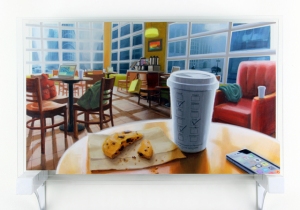 Prior to committing to a collection of work, I discern through and through what I want to explore. In order to make sense of my surroundings I distill my thoughts, intuitions, and eureka moments. I do so by writing down a torrent of unsorted ideas and sketching vignettes in quick drawings. This documentation will be the foundation of the finished products on canvas, paper, plexiglass, wood, etc. This conceptual process can take months to settle and usually runs simultaneous to the execution of other projects.

The physical execution of my artwork is long and time-consuming. Regarding my plexiglass artwork, it takes me several weeks to finish each piece, given the multilayer aspect of my installations and the details I bring in. I treat each plexiglass panel as a painting itself. In my art making I notice a pattern: I start each project very energized, towards the middle comes tedium, and near the end I am excited to see the final realization of my ideas and efforts.

I tackle my studio practice with a method similar to when I used to work on long papers. The discipline and endurance gained during my academic years serves me well in my art making today. In the past I invested so much time researching and writing to learn and get good grades; now I spend at least eight hours a day when I am in my studio. In the end, I am driven by my desire to reach out and communicate. Those who believe that making art is fun—a self-indulgent nice “hobby”—know little about art.

During my self-taught period as an artist I was drawn to the Surrealists, especially De Chirico and Max Ernst, and German Expressionists Ensor and Kirchner. I was struck by how their strong visuals reflect their historical moment. Since then I have gone through different phases, when I have been attracted to different formal features related to painting. I have been fascinated by Jenny Saville’s physical handling of oil medium and the sheer format of her canvas. On the other end, l praise the line work and attention to detail in Shahzia Sikander’s early miniature work. I also gravitate towards artists who are grounded in traditional techniques and adapt them to our times. At the top of this list are John Currin and Odd Nerdrum, who embrace Renaissance and Baroque techniques respectively. I especially gravitate towards Nerdrum for the philosophical ideas unveiled in his enigmatic pieces. For the most part, I identify with artists who address social and cultural issues in their work, like Zhong Biao in his view of East meets West, and Laylah Ali with her whimsical paintings to address ugly and violent events.

I find in movies not only relaxation and escapism, but also a correlation with my work. Though I have a keen eye for the cinematographic aspect of movies (photography), I pay close attention to their plots. Lars von Trier, David Fincher, and Wes Anderson are great story tellers. Along these lines I also listen to music. While I like classical to heavy metal, I am very fond of opera and some Broadway musicals because of their stories and how they develop musically and lyrically. I read novels—Gillian Flynn has my attention lately after finishing all the books in the A Song of Ice and Fire saga. In addition l appreciate graphic novels, especially those in which the color palette is limited or purely black and white. Though all these activities are gratifying in their own way, there is nothing I value more than conversing and sharing with my few close friends about life in general.

Sammy Chong is a first-generation Ecuadorian from Guayaquil; he comes from a large artistic family of Chinese descent. In his early adulthood, Chong began a career in Graphic Design, working in an international advertising firm. However, after a near-fatal car accident, he became more aware of, and sensitive to, larger transcendental issues. He then studied philosophy and theology at Universidad Javeriana, in Bogota, and earned a Master’s Degree from Boston College. Throughout his studies, Sammy developed as a self-taught artist, eventually developing a portfolio based on the labyrinth, and other mythological and spiritual themes. After teaching at the university level in Ecuador, Chong completed the MFA program at the School of the Museum of Fine Arts, Boston. He is currently a Visiting Professor in the Fine Arts Department at Boston College. He keeps a studio in Jamaica Plain, Boston.

This entry was posted in Uncategorized and tagged Boston, identity, Painting, plexiglass, society. Bookmark the permalink.