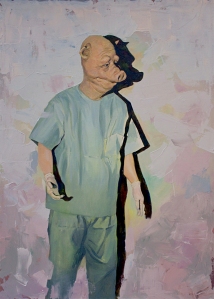 I tear, I cut, and I sew. My work is to operate plastic surgery on a pig’s head. By using metaphors I can intensify reality. The context of my work describes not only the shape of a phenomenon, but also one’s perspective about the cause of a cultural happening.

Studying the cause and effect of plastic surgery in South Korea is the subject matter of my research. South Korea has the highest cosmetic plastic surgery rate in the world. I believe the phenomenon of radical plastic surgery in South Korea is a reaction to the loss of self-identity during the Japanese colonial period. It is a way to overcome the notion of a split nation and ideology, and the acceptance that Koreans must strictly follow social rules, which was how Korea was able to succeed in economic growth. These three factors have led Koreans to fail to acknowledge diversity. One aspect of the outcome was the idolization of a certain westernized look. The pig symbolizes the destruction of Korean tradition and beauty, and idolization of a certain look and way of thinking.

My project focuses on finding the relationship between factors in history. Although the research is limited to South Korea, it will explore the vulnerability of humankind and I hope my work serves as a vocal point in exposing the violence of idolization.

The beauty of the opposite sex is my biggest pleasure. However, it is also an addicting and unfortunate idol that intoxicates me. My experience with plastic surgery culture in South Korea especially excites my curiosity, and its extremeness is a useful example for my observation into the nature of fallacy (misconception). “Idol” as a concept is created by humans and fueled by the weakness of human beings.

In order to understand plastic surgery as South Korea’s major weakness and idol, we must examine this phenomenon not just from the present. We must also examine this from all angles, past and present. The past 100 years have been a turbulent era of change in South Korea. In 1910, South Korea was colonized by Japan, and the insidious policy to obliterate the Korean nation eliminated and distorted Korean identity. In 1945, Korea got its independence restored. Five years later, the Korean War broke out based on antagonism between Liberalism and Communism, and it drove ideological confusion and caused economic collapse. For the last 50 years, South Korea has been extremely focused on its economy and education to overcome hunger, despite political chaos. Western technology has been the driving force of growth, and western culture has begun to replace Korea’s lack of identity through media. The country’s discontinuity from its own history and its modification by outside pressures have increasingly impacted the culture at the beginning of the 20th century. Korea’s culture, which was stifled for so many years, has now developed dramatically. As a result, the media has created dynamic cultural icons such as plastic surgery. This is a reaction to a lack of inner identity, and a self-comforting method to overcome the country’s remembrance of its historical and material poverty. The experience of a huge gap between Western civilization and Korea in its relatively poor era also became a trauma. Significantly, the whole process of this history and the relationship of cause and effect have not been recognized since people are already familiar with living in a new civilization without connection to past tradition.

Plastic surgery cultures in South Korea reveal that culture does not have absolute justification in itself, but is instead closer to the nature of statistical tendencies and developments that can be deconstructed. I am raising questions about freedom and truth in order to resist the human history that has evolved and developed through mimesis and idols. Even if I am living a fully manipulated life, I at least want to realize it. Endless inquiry concludes in aporia, yet for a moment it approximates freedom.

In terms of influential work experience, I worked for Nike as a retail-marketing specialist and have my career in an advertising field. To graft my work background to fine art is one of my main goals.

Advertising is a very racy activity. Advertising agencies are using the core of philosophy and technology that developed throughout human history to move people’s minds; They obviously include visual art to double the power of temptation. I have a great appreciation for advertising and its relationship with the human’s ability to communicate, but it is sad that advertising is restrictive at the same time.

The whole process of advertising is geared towards one goal, to induce a person to buy a product. My plan is to apply my knowledge in advertising to human life, and not only for sales. I want to advertise humane topics. There are many ideals we shouldn’t forget or issues that we should recognize, however not every company is willing to spend their money to promote ideals unrelated to their profit. The context of my work will be deeper than the base advertising “buy” message. I plan to create a visual narrative to deliver complicated messages or emotional conversations. 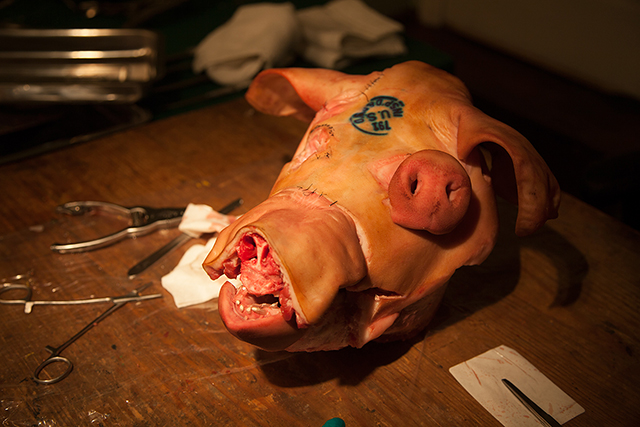 My studio work starts from the small room in my brain. I gather all my materials from this room in the form of people, events, objects, and stories. When I find a topic I really want to talk about, I leave it in the room for a long time to mold with my consciousness. The topics start to combine with random ideas in the room, and will strangely transform into the body of an artistic concept. This process provides me with a chance to conceptualize the core of the topic with an ironic viewpoint. After this conception, I can move to find an actual space to visualize it. The materials required to bring the concept to fruition depend on the concept itself and are therefore subject to change with each project. Choosing and preparing a studio is often difficult; I tend to create a studio with whatever means are available to me. Eventually, a white box in a gallery or museum becomes my studio. After trial and error experimentation, the conversations with viewers in real space and time become valuable materials in the room in my brain again. Since the meaning of an artist’s studio is diverse in contemporary art, I think artists cannot escape from the studio anywhere or anytime. The studio is everywhere and everything.

I doubt that there is any value in creating something with meaning and purpose that I have decided beforehand. The art itself should be at the edge of what has been done before; it should open up new areas and bring light to new concepts. I add new perspectives and knowledge to make me unsure about the direction of my work. I’m doing research and looking for new experiences. When I am faced with a new direction that I’ve never thought about, I am unable to judge the work until I go further with it. This is what makes me realize that I can go further with this new work. This might distinguish my roles from other artists who instead find answers from within themselves. With that being said, this is the broad role that I play as an artist, but the specific details of my role are constantly changing with each new project. 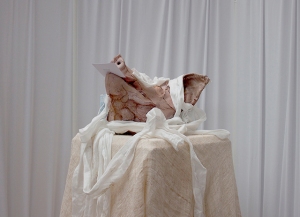 Honestly, I was not the kind of person who was too diligent. My decision in my late 20’s totally changed my situation. I made the choice to do art abroad instead of having a stable job, so making art is my life now. You may think it sounds little bit sad, but now that I am abroad I cannot find any reason to hesitate to create art. I don’t have any family and friends here to spend my time and energy with. I’m working all the time. I’m developing my ideas through research and planning when I cannot get access to make art, and I am waiting until I maximize my concentration. Personally, I prefer to work after organizing my ideas. Cleaning my studio and having adequate sleep contributes to the organization of my ideas. I really enjoy these moments that allow me to entirely focus on making art. I also think that this is the time I really needed in my life; this time is all the time.

There was a great change in my work, and my work is still progressing in unexpected ways. Switching a pig’s head to a pretty celebrity’s face was my simple original goal. Now, I have a different visual narrative and I have added more historic contents. Above all, my viewpoint about plastic surgery has been changed drastically.

This is a tough question to answer because I haven’t found any other position that can satisfy my interest except making art. 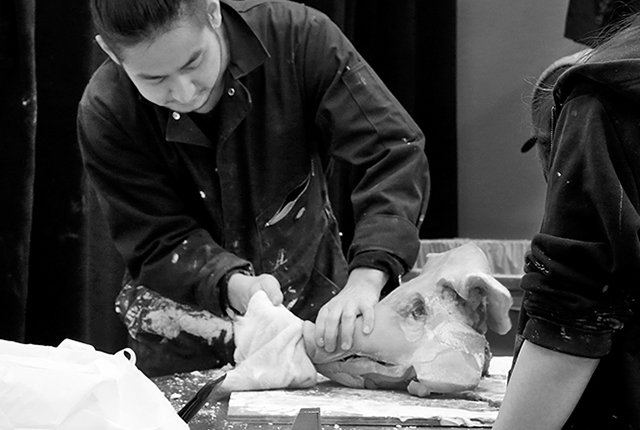 About Artdose Magazine Founded in 2013, Artdose Magazine is an independent print and digital art magazine committed to connecting and supporting the visual arts in Wisconsin. Published by Frank Juarez, the magazine is premised on the belief that we all share common goals of introducing, engaging, and offering others diverse art experiences. Artdose appears in print as a bi-annual art magazine, through a weekly art e-newsletter and on Instagram and Facebook. About Frank Juarez Frank Juarez is a former gallery director, award winning art educator, artist, author, and arts advocate living and working in Sheboygan, Wisconsin. Organizing local and regional art exhibitions, community art events, facilitating presentations, supporting artists through professional development workshops, use of social media and networking has placed him in the forefront of advancing and promoting local artists and attracting regional and national artists to collaborate, network and exhibit in Wisconsin.
View all posts by Artdose Magazine →
This entry was posted in Uncategorized. Bookmark the permalink.