Posted on July 20, 2014 by greymattergallery 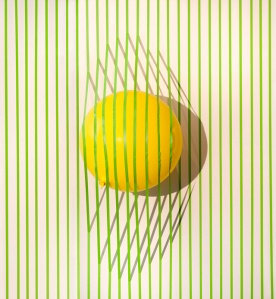 Much of my current work is primarily sculpture and installation based. The work is usually an attempt to document time and objects that change over time. The way I have been exploring these ideas is by experimenting with balloons as a documentation of time. Since balloons are not airtight, they immediately start the deflation process once they are inflated. In the installations the balloons are used as structural elements that the entire work relies on. Over time as the balloons deflate, the structural integrity of the sculptures and installations begin to fall apart, in some cases that could literally mean falling off the wall or tumbling to the ground.

I was raised in a family of math and science practitioners; my mother is a dietitian, my father a neurophysiologist, and my brother is a statistician.  I was raised to think about things in a very logical and rational way.  I have also always been a collector.  I enjoy the process of cataloging, sorting and documenting objects.  At times this “obsession” comes through mapping my own life: keeping detailed notes of things like where I go everyday, how I spend my time, and everything I google. I work better from a plan than from intuition. I would say my work is greatly influenced by the way scientists ask questions and search for answers but what Im seeking isn’t necessarily a scientific based answer.

I share a studio in downtown Kansas City with an amazing artist and one of my best friends, Garry Noland.   I use the space in my studio to experiment with materials and try out different possible installations.  Often times my work begins outside the studio.  It is inspired by a situation or encounter as I am going about my day.   I bring a lot of things into the studio to play with and expand upon.  Some of my most productive time is spent outside rather than inside.

As well as making art, I also co-direct and co-curate a space in Kansas City called PLUG Projects.  Myself and four other Kansas City artists founded PLUG Projects in 2011.  We all share the mission of bringing fresh perspectives and conversation to the local Kansas City art community. Our goal is to energize artists and the larger Kansas City community by exhibiting challenging new work, initiating critical dialogue, and expanding connections of artists in Kansas City as part of a wider, national network of artists.  We host several event series, publish a biannual publication, and exhibition artists from all over the country.   I have always had an interest in other artists work but I never thought I would be as invested in curating as I am today. 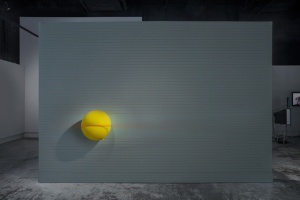 I am the most productive in the morning. One of my good friends has started what I refer to as the “Michelle Grabner routine.” She goes to studio at 4:30am before she starts her regular workday. It’s a great way to ensure that you get the studio time that you need. I hate to admit it but 4:30am is a goal I’m still working on.

Visually, my work has changed greatly in the past five years. It has grown in scale and the materials have changed, but I find that the ideas driving the work are still the same.

It is hard to pinpoint what exactly has had the most impact on my work. One thing that is has helped immensely is being part of a supportive community made up of friends, artists, critics and curators that are more than happy to donate their time and provide feedback. These are the people I constantly look to for conversations about work. I have found that Kansas City is a very healthy and productive place to be an artist.

I would be an urban farmer. The past few years I have been helping my partner start his business, which is based around local and organic food, and I realized there is a big part of me that loves growing food. I like to nurture the plants, check on them daily, pull the weeds and foster the development of the plants. And of course, the best part, harvesting the produce.

Cory Imig is an interdisciplinary artist, curator, and educator currently working in Kansas City, Missouri. She received her BFA from Savannah College of Art and Design in 2008, where she studied fibers and sculpture.  Imig has attended residencies at Virginia Commonwealth University, The Vermont Studio Center, ACRE and the Charlotte Street Foundation Urban Culture Project Studio Residency. In 2012, she was a fellow in the Oklahoma Art Writing and Curatorial Fellowship Program. She has participated in numerous shows in the Kansas City area in spaces such as Charlotte Street Foundation Project Space, La Esquina, City Arts Project, and the Kansas City Library.  Imig along with four others was awarded a Rocket Grant from the Andy Warhol Foundation for Visual Arts in 2011, to start a curatorial collaborative in the West Bottoms called Plug Projects. 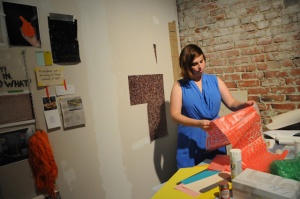