Posted on June 7, 2014 by greymattergallery 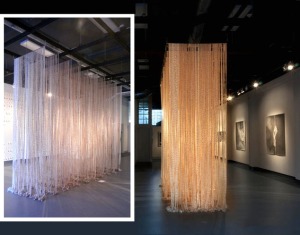 My work explores the mediated experience of wartime. As an American artist, much of my understanding of our country’s involvement in the Middle East and South Asia develops from the articles I read, or from information presented on the televised news. The essence of human suffering is often buried in this over-abundance of information. The work I have produced during this past decade of American conflict is unified in its desire to distill, encapsulate,and visually present complex issues of war with equanimity.Pausing to examine the details of violent events, my work is a personal attempt to both humanize these tragedies and to combat the numbingeffects of a media-saturated culture. Gunpowder has been a central medium in my work. Incorporated into my drawings and installations, this material speaks to the volatile conditions from which my subject matter derives. Sometimes dampened, and thus rendered inert, the gunpowder also acts as a metaphor for the human potential to be compassionate and to promote peace — to create, rather than destroy.

I was born in San Francisco and grew up outside of New York City, in Montclair, New Jersey. I come from a family of modest means. My father was a news photographer in the military and left both professions for factory work when I was about two years old. Later my mother joined him and worked on the second shift assembly line at Westinghouse.  Coloring books and paint by number sets were my only exposure to art until I was mesmerized by Michelangelo’s Pieta at the 1964 World’s Fair in Queens, New York.  In 1968, I began studying mathematics at Bradley University in Illinois. After one semester, encouraged by friends, I changed my major and entered the College of Art. At 18 years old I walked into my first art class and found my passion.  Since then this passion has defined my life.

While much of my work has concentrated on two-dimensional drawing and has taken place in the studio, recent projects mark a move towards site specific, interactive installation. Engagement with a broad public audience is important. Using an expansive visual language, I seek to inspire both personal reflection and generate discussion about topics that are often difficult and polarizing. I look for exhibition venues that encourage investigation of current cultural and social issues while educating and building audiences for Contemporary art.

Two years ago I began a collaborative project with a socially active component. It was inspired by Nicholas Kristof and Sheryl WuDunn’s book “Half the Sky”. How would things be different if the injustices suffered by women around the globe ceased? Bringing women into the economic, political and academic spheres of poor nations would not only contribute to their evolving economies, helping to alleviate poverty, but could actually transform some of the causes that lead to war and conflict.  In partnership with Barakat, a Cambridge MA non-profit that provides education for women and girls in Afghanistan and Pakistan, I am developing an installation that speaks to the benefits that this potential could unleash. 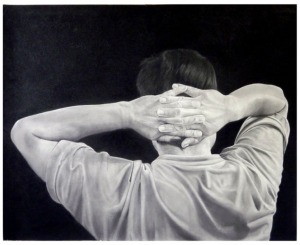 In the past, when I was teaching more, I had a structured schedule for the studio. Now, I am more flexible. I used to be most productive in the early morning, now I find myself working more productively in the afternoon and early evening hours. I have more meetings and out of studio tasks that make scheduling fixed studio times less practical.

My work has always been labor intensive and detailed. The form of the work continues to morph – from very realistic drawings in gunpowder & graphite to more abstract, graphic depictions that quantify events. Drawing is always a component weather I am working with traditional tools or unconventional materials such as gunpowder and vintage gauze.

I am inspired by many creative souls – in and out of the art world. Howard Zinn, Thich Nhat Hanh, Nancy Spero, Doris Salcedo, Mona Hatoum, William Kentridge, Felix Gonzalez-Torres, JR, Krzysztof Wodiczko to name a few.

I love teaching and would teach mindfulness practice to young people if I could.

Linda Bond is a former Fellow of the Fine Arts Work Center in Provincetown and a 2013 Massachusetts Cultural Council fellowship recipient. In March 2014 she exhibited her drawings and installation work in a solo show at Southern New Hampshire University. Other recent exhibitions include those at the MFA in Boston, Simmons College, Brandeis University and Available Potential Enterprises. In addition her work has been exhibited at venues throughout the Northeast, including the Brattleboro Museum, the Art Complex Museum, the Fitchburg Art Museum, and the Corcoran Gallery and is in numerous collections including those of Boston University, Simmons College, IBM, Nokia and Fidelity Investments. She is the recipient of grants from the Artists Resource Trust, the Massachusetts Foundation for Humanities & Public Policy, and from the Massachusetts Council on the Arts and Humanities.  In Provincetown she is represented by the Schoolhouse Gallery. Linda taught at the Massachusetts College of Art in Boston for fifteen years and has been a mentor for the low residency MFAWC MFA program.  Currently she is working on a new drawing series and a large scale installation project as a Visiting Scholar at The Women’s research Study Center at Brandeis University.