I am a fine art printmaker. .  My work is motivated by political, social and religious current events and the effects those events have on minority groups.  I smash together religious iconography and comic book imagery to create likenesses of the heroes and hypocrites of our contemporary society.  I usually begin by creating a collage of hand drawn elements and found images.  The collage is then meticulously drawn by hand on a prepared slab of limestone or engraved by hand into a copper plate.  In either scenario I am creating an original image on a matrix that can be inked, run through a press, transferred to a sheet of paper and reproduced in a limited edition.  Every part of what I do is labor intensive and time consuming but will yield results unattainable in any other medium.  Occasionally I dabble in screen-printing, woodcuts, and digital collage.

I came up as a graffiti writer.  I painted murals on walls and trains with my friends.  At some point I had to admit to myself that I didn’t possess the “I don’t give a f*ck” mentality necessary to excel in graffiti. I wish I did.  It started out as a fun way to spend the day with the homies but it really jump-started my desire to create.  Hip-Hop culture has always been a major influence in my life (literally since I was a little kid).  I was part of a couple Hip-Hop groups as a young adult.  We tended to focus on political and social commentary.  I’m attracted to the powerful images that lyrics can paint in my mind, the emotions I feel when listening to the message, the sincerity of an emcee spilling his/her guts and the music’s power to bring together like-minded people.  I want to make art that does those same things.

I was born in Washington D.C. and raised in Waldorf, Maryland.  I have a very diverse family with 8 siblings.  My father, born in 1938, is African American and my mother, born in 1949, is Caucasian.  They didn’t have it easy growing up. My mother was extremely poor and my father grew up through segregation.  My parents are both extremely hard working people and raised me to be as well.  They are also the two most giving and open-minded people I’ve ever known.  They taught me at a young age to treat people equally and what it meant to truly be a good person.  They have instilled in me their values of helping others in need and judging people only by their character.  The art I create now pushes those same values.

My current body of work “Heroes & Hypocrites” is an examination of the roll of religion in contemporary political society.  It exposes, in particular, what I perceive to be the misinterpretation of the bible and the misuse of its ideals.  It is hard for me to understand that in 2014 people are still discriminated against due to aspects of their humanity that they can’t control.  I’m speaking of the unfair treatment of the gay, lesbian, bisexual and transgender communities across the world.  Growing up as a minority has gained me a “zero tolerance” stance when it comes to discrimination.  My work responds to the current events involving politicians and religious extremists, who wish to segregate, discriminate or spread hatred toward the LGBT communities.

I pair imagery from comic books and stained glass as a way to comment on the warped and twisted reality we seem to exist in. Villains and heroes from the comics take on roles of politicians and saints and echo the idealized figures found in Christian imagery.  The generalization and simplification of characters in the stories depicted in stained glass mimic the harsh graphic qualities of the comics.  Violent explosions taken from the comic books are used as a vehicle to describe the volatile nature of bigotry and hate and create a jarring experience when combined with saturated color and meticulously detailed embellishments.  Printmaking has played an important roll in the creation and distribution of political propaganda.  The ability to create multiple images from a single matrix makes mass-production a possibility.  This enables printmakers to get their art or message into the hands of the masses at a relatively low cost if necessary.  My work isn’t necessarily propaganda…maybe…but it is intended to make people think about the society we live in and printmaking allows me to put an image in multiple places at once making my message much more effective.

The work I make consists of multiple time consuming and labor intensive processes.  Graining stones, rocking copper plates, drawing, scraping, burnishing, etching, inking, printing…more printing…even more printing.  All of these steps give me time with my work.  The slow process allows me to live with the work in its various stages of completion.  Once I begin creating a piece I really have to believe in its purpose in order see it through to the end.  The matrices I develop are permanent. There are no re-do’s, no mulligans, if I screw up…it is pretty much the end for that particular print. I think this makes my decisions more deliberate and my message much more powerful and sincere. 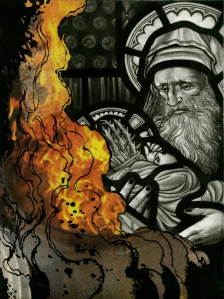 I am a serous workaholic.  No one was ever shy about telling me how hard it is to “make it” as an artist.  This seems to be the case for anything I’ve ever wanted to pursue. Music, graffiti, art…you have to bust your ass to get to the top in any of these fields.  For the most part, luckily, I have been surrounded by people who want to be the best at what they do.  They’re hungry.  They keep me motivated.  I also have a ridiculous support system of family and friends behind me.  I work hard so they know that not just my efforts, but theirs too, are worth it.  I think I get that from my parents as well.

I like to eat food with my wife. We have “Fat Friday” every Friday night, which consists of eating whatever we want and watching our stories.  I like chillin’ with my dog, Poe.  I really love listening to music…it transports me away from all stress.  Everyone should listen to Bonobo at some point.  It’s like magic.  But really, if I’m not making art…I’m preparing to.

Aaron S. Coleman is an artist and educator living in Dekalb, Illinois.  He received his Master of Fine Arts degree from Northern Illinois University in the spring of 2013.  Aaron is a mixed media printmaker utilizing mezzotint, lithography, intaglio, relief and serigraphy to create works focused on political and social commentary.  He combines imagery from comic books and stained glass windows to raise questions concerning misconstrued belief systems and twisted moral values in our society.

Aaron is an adjunct instructor at Northern Illinois University where he teaches various printmaking courses.  He also teaches traditional stone lithography at the Chicago Printmakers Collaborative and drawing at Elgin community College.  Aaron stays in tune with the printmaking community, organizing portfolio exchanges and exhibiting both nationally and internationally.  In 2012 he organized an international mezzotint exchange titled “Both Sides Of The Brain” which hosted 17 artists from 6 different countries.  The portfolio was exhibited across the U.S. at several universities and galleries.

He has exhibited at the Liu Haisu Art Museum in Shanghai, China and was invited to participate in the 6th and 7th International Printmaking Biennial of Douro in Alijo, Portugal.  Aaron’s work can be found in the collections of The University of Colorado, Wichita State University, the Ino-cho Paper Museum in Kochi, Japan and the University of Tennessee Knoxville’s Ewing Gallery Collection.

Aaron is a husband, a dog lover and a workaholic.