Posted on May 3, 2014 by greymattergallery 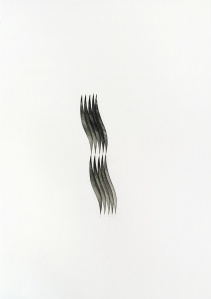 Constructing an image of the intangible.

I enjoyed a happy childhood growing up in a family that inspired a feeling of security, cultivated the love of nature and favored dreaming. I believe that had a great deal to do with me choosing this path. When I was a kid I was interested in constructing things and learning how things are built, a curiosity that was encouraged by my father who has always been an artist in the broader sense, making beautiful things from scratch. I guess I am still doing the same thing only with different means.

Isolating myself in the workshop to create is an essential part of my creative practice. Recently my studio practice expanded to include the social sphere in the form of its reflection on the urban environment. My current work in “Metamorphosis” involves documenting elements from the city and giving them a different, poetic, function as structural elements of my “Improvisations” and installation work. That means that a significant part of my studio practice takes place in the city streets.

The time I dedicate to my work is shared between studio practice and tasks that address the issue of taking the work out of the studio into the world. Documenting the work, preparing applications in response to artist calls, maintaining an online presence and finding the appropriate venues where I can sell my works are time-consuming but necessary tasks. The amount of time spent on either of these two distinct parts of my activity varies and moves in a circle. The circle opens with the studio practice and concludes with the introduction of the work into the world. Often circles that relate to different bodies of work run in parallel and overlap. As far as the studio practice goes my preference is to start the work early in the morning and go on until I feel I have accomplished something substantial that day.

It is more my perception of my work that has changed rather than the work itself. Having acquired a better insight into what it is that interests me and keeps re-emerging allows me to tap deeper into that source, proceed with more confidence and have a stronger sense of direction.

All my close circle has had an impact on me and my work, most importantly my parents and brother, my husband and my oldest and closest friends. Other than that, Plato, Baudelaire, Nietzsche, Breton and Kazantzakis are figures whose work has had an impact.

Being an artist in my view is more than an occupation, it is rather a personality type. If material circumstances didn’t allow me to express this inclination through creating I think I would try and channel it through the role of the educator. Alternatively, I would choose being a tour guide, introducing sites and locations that carry cultural meaning to people and doing my part in keeping historical memory and knowledge of man’s accomplishments alive.

Parts that constitute a whole or units that build a construction are recurring elements in Vlassopoulou’s work. Documentation re-emerges as a method focusing on the everyday environment and objects that carry personal histories. In her current work “Metamorphosis” urban space serves as the point of departure and a link to common human experience. Consisting principally of abstract forms, her vocabulary includes images that allude to the physical world as well as textual elements when the reference they make is relevant to the work. Painting, drawing, installation and the book are all welcome forms.

Penelope Vlassopoulou was born in 1977 in Athens, Greece. She studied Painting at the Athens School of Fine Arts, graduating with honors in 2006, and Technology of Graphic Arts at the Athens Technological Institute, graduating in 2000. She concluded her fourth year of studies in Painting at the Académie Royale des Beaux-Arts de Bruxelles, Belgium, on a scholarship from the State Scholarships Foundation of Greece (2004-2005). Past group exhibitions include Lost Space, João Cocteau Gallery, Berlin, Germany, 2014; The Art of the Book at the Athens School of Fine Arts, Cycladic Art Museum, 2011; Greek Artists’ books: Contemporary Artworks and Editions, ART-ATHINA International Contemporary Art Fair of Athens, 2010; and Book Arts Fair, Pyramid Atlantic Art Center, Washington, USA, 2006. Alongside her practice as an artist she works as a designer, with work featured in venues such as the National Museum of Contemporary Art of Greece and the Benaki Museum in Athens, Greece. She has published articles and essays on the subjects of art, design and the graphic arts. She lives and works in Athens, Greece.

This entry was posted in Uncategorized and tagged abstract, conceptual, Drawing, Greece, Installation. Bookmark the permalink.