Posted on April 11, 2014 by greymattergallery

I make collages based on my observations of the most ordinary and banal things that I see around me. I pay close attention to the very specific shapes of things, often zooming in or cropping, while intuitively changing the colors. My original idea transforms into something unexpected and unusual but at the same time familiar. I think of the result as a sort of “visual joke”.

When I was a kid I drew all the time, in fact, the first thing I told people when they asked me what I wanted to be when I grow up was an artist (as well as veterinarian, actress, and softball player). I truly became an artist during my second year in college when I was a graphic design major. I was sitting in my typography class in front of a computer screen zoning out while my professor lectured us about labels on potato chip bags when I suddenly realized it just wasn’t for me. That’s when I decided I had to be an artist. I honestly felt I had no other options.

Where I am from and how I grew up has everything to do with the kind of artist I am today. I grew up in a Suburb of Sacramento, California that I like to call “Any Town USA”. My hometown consisted of rows of tract homes, perfectly manicured lawns, strip malls, parking lots, and miles of soccer fields. I spent much of my childhood curbing my boredom with daily walks to Taco Bell, building forts out of cardboard boxes, and watching hours and hours of TV including reruns of The Simpsons, Ren and Stimpy, and Seinfeld. I really had to train my imagination to take myself out of the mundanity of suburban life and to try to build an identity for myself. I think it’s safe to say that most people make an effort to lead interesting and fulfilling lives, and as much as we would like to think that we are doing that, rarely do we account for the hours we spend stuck in traffic, standing in line at the post office, or staring out of the window at work. My sense of humor and curiosity have always played a role in how I deal with getting through those dull moments and making art is my way of finding something meaningful in them. 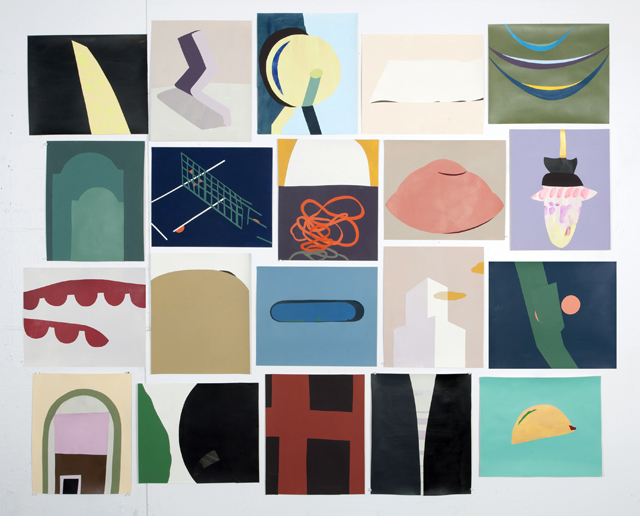 Group, flashe and acrylic on cut and pasted paper, 2013

Conceptually, I’m interested in mystery, humor, and simplicity. My work represents how I want to live my life which is why I will simply say that I think we take ourselves too seriously.

For me, it is important to make a habit out of going to the studio as often as possible and to realize that every day of work is a good day even if there is nothing to show for it. More often than not I am excited to go to the studio but there are some days when I feel stuck and unmotivated. I can usually dig myself out of a rut by simply drawing, going for a walk, reading a book, chatting with a friend, or just looking around. I feel that during my first few years as an artist I was training myself to work consistently and to have the right frame of mind in the studio. I am always making an effort to balance myself with having a sense of urgency while having the patience not to force anything. I find that having several projects going at once helps me stay motivated. Lately, I’ve been experimenting with other materials, exploring the 3D, and learning some computer animation skills. These projects may never see the light of day but they have potential and I am excited about that. I am also the kind of person that cannot stand still, which really helps in the studio. Ultimately, it’s about having confidence and not being afraid to fail.

I am fascinated by Indian Miniatures, Japanese Woodcuts, and the work of the Ancient Egyptians. I have a huge list of painters I could name but I always seem to come back to Matisse. I also would like to mention all of my friends and colleagues. I am surrounded by so many talented and interesting artists it’s overwhelming.

It is so easy to get sucked into the routine of spending hours of solitude everyday in the studio and not coming into contact with another human being. That is why I find it so important to take the time to leave my studio and go out and interact with the world. I enjoy traveling and watching live performances including; stand-up, improv, music, theater, dance, and sports. When I leave my studio and experience something first-hand I always come back feeling invigorated and full of ideas.

Trina Turturici received her MFA in Painting from Boston University and her BFA in Drawing and Painting from California State University, Long Beach. She has participated in several artist residencies, including The Vermont Studio Center, and has exhibited nationally. She currently lives in Los Angeles where she continues to work in her studio at an old brewery. 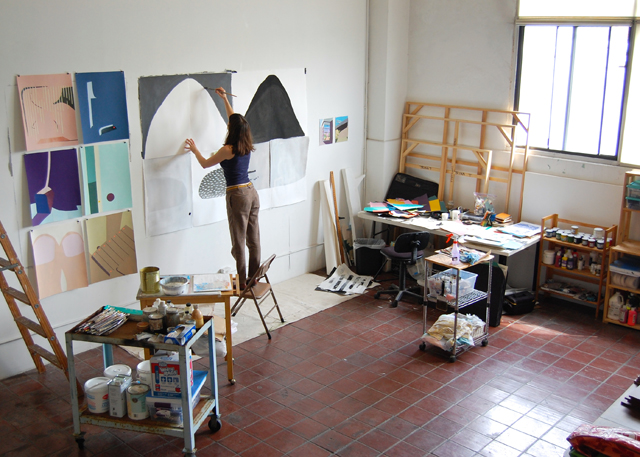