Posted on April 6, 2014 by greymattergallery

I make sculptures with found objects. I’m particularly interested in exploring how I can use material objects to represent abstract concepts of a physical self vs. a spiritual self or soul, one’s inner world vs. outer world and life vs. death. In addition to my found object sculptures, I’ve also recently started a series of wall hanging sculptures made out of twine representative of tangled inner thoughts and the struggle to make sense of those thoughts.

I was born and raised in Detroit and I remember being fascinated early on by the graffiti and decay throughout the area. There’s a great recycling non-profit called Arts and Scraps in Detroit. They sell scrap industrial materials and donated arts and crafts materials and they have an education program where they put project kits together with these materials and bring them to schools. In the early 90s they came to my preschool, and in retrospect, I think that day was the start of my love affair with making art with odd materials. My mom was already a quilter and crafter, so the discovery of Arts and Scraps only added to the abundant presence of craft supplies in the house. Growing up, I went to lot of garage sales and thrift stores, and it was only a matter of time before I realized the potential of the items these places had to offer as art materials, too.

I’m currently a resident artist at Buffalo Arts Studio, where almost all of my art making takes place. Having a studio outside the home allows me to keep my art making mess contained and out of my tiny apartment, and also eliminates certain distractions while I work, like the TV and my cats. I do think it’s important to get honest thoughts and feedback from others, though. I try to leave my door open when I’m working so that visitors to can stop in and strike up a conversation about my work.

The artist as a researcher. When I was young, I had this belief that an artist thinks up a masterpiece, just sits down and makes it, thinks up another one, makes it, and so on and so forth. The reality is I spend a lot of time researching and experimenting, and frequently the results are not a masterpiece. Sometimes I make a couple maquettes of a piece before even starting on the real thing. Instead of producing one piece at a time, I’ve often got 4 or 5 things going at once. Research for me can involve looking at the work of other artists working with similar themes or materials, or going to the library and looking through psychology books, or wandering through the aisles of Home Depot or Michaels just looking at materials and thinking about their possible uses. Then I experiment. When I started working with found objects, a lot of initial experimentation went into just trying to affix objects of different materials together. I discovered many methods that didn’t work. At first, it was instinctual to think of these as failures, but eventually I came to realize that it’s okay not to get things perfect on the first try, and it’s actually a really unrealistic expectation to do so. 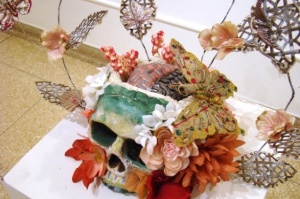 I work part-time during the week and my work shifts often start at 5 or 6am, so my studio time revolves around my work schedule. I generally spend all day Saturday and Sunday in the studio and try to get there after work a few times a week. If I’m working on something small or not very messy, I will occasionally bring things home to work on.

Five years ago, I was an undergraduate at LSU studying photography. I was shooting 35mm film in New Orleans and occasionally flying home and shooting in Detroit. I was really interested in looking for found still life set-ups, like debris piles and thrown out toys. I moved on to making my own still life sets, which were gradually becoming more advanced and sculptural and I was becoming less interested in the actual photographic process. After I took a welding class, I switched my concentration to sculpture, and haven’t looked back. I’ve explored diverse 3D mediums such cast metals (aluminum, bronze and, iron), ceramics, paper mache, and wood, incorporating found objects with fabricated pieces.

The writings and theories of existential psychotherapists have had a huge direct impact on my work, specifically Otto Rank, Irvin D. Yalom, and Emmy Van Deurzen

I’ve always been envious of touring bands and musicians because living in a bus and getting to wake up in a different part of the country everyday sounds so exciting, so I’d probably sell band merchandise or be the roadie that vacuums the stage and tapes down the setlists for the band. But in actuality, I’m planning on going back to school for my MFA in a couple years, and hope to someday become a professor.

Katherine Virag was born and raised in Detroit, MI. She received both her BFA in Studio Art (concentration in Sculpture) and her BS in Psychology from Louisiana State University in 2013. As an undergraduate, she also spent a year studying at Buffalo State College as a national exchange student. She has been the Arts and Crafts Program Director for two different summer camps in Colorado, planning and leading arts and crafts projects for a variety of populations including children and adults with disabilities. Her work has been included in the Uncommon Thread Wearable Art Show in Baton Rouge, LA and has been included in shows in Tangent Gallery in Detroit, MI and Hi-Temp Gallery in Buffalo, NY. She is currently a resident artist at Buffalo Arts Studio in Buffalo, NY.

A Fisheye View of Katherine’s Studio