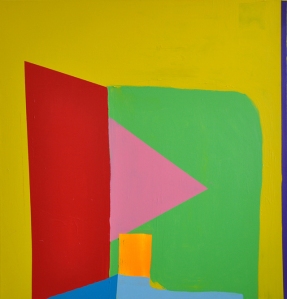 I’m a painter. I make non-objective/ abstract paintings with and emphasis on intense color and bold forms.

These elements jostle and compete with one another for dominance within off kilter compositions.

At times the combination can be garish and unsettling and at others it may seem to reference the graphic or decorative- often in the same work.

From a very young age I was interested in art and showed some talent. But it wasn’t until later, as a young adult, that I decided to focus all my energies on painting and, somehow, having a career as a fine artist.

In my early twenties I was busy with a lot of creative endeavors (music, writing, acting, and painting). At some point it became very apparent that I couldn’t continue to divide my efforts and expect to do anything well.

When I went to a museum or worked on a painting I got a feeling that I didn’t get from any of my other outlets. I quickly decided that that passion should be nurtured and followed.

I grew up in Memphis, TN and there wasn’t much opportunity to see great art. I didn’t know anyone personally who lived their life as an artist.

Luckily my family valued art and my interest in it. My mother in particular was very supportive and encouraged me to pursue it.

The first art I remember being exposed to as a child were reproductions of religious paintings by the old masters. I came across these in a large picture Bible that belonged to my grandmother.  Aside from the drama and grandeur of the work it also dawned on me that Art was something people did! It could be a career or vocation. People devoted their lives to making paintings. 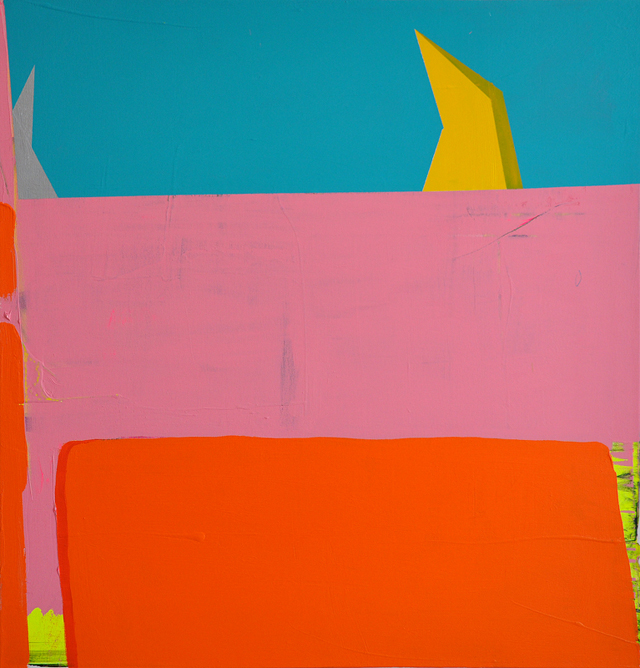 My work isn’t conceptual in that way.  I deal mainly with the desire to make a strong visual statement.  I’m mostly working with the problems of spatial relationships and color interactions. My forms and compositions are very much “arrived at”.  Often after the fact the whole painting or specific forms may remind me of a memory or experience but I don’t believe naming that would be useful to the viewer and even if it were, that’s not a level of exposure I’m interested it. It’s not something I’m interested in sharing.

The fact that I use acrylic paint has nothing to do with conceptual concerns.  Acrylics best suit my impatient personality and I prefer their flat, artificial surface, and versatility to oils. 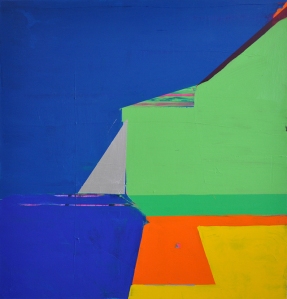 He’s right. Work comes from work. There’s no such thing as inspiration. That’s for amateurs. It actually kind of annoys me when I hear artists talk about inspiration. I tend to not take them very seriously.

I’m motivated to paint by seeing great paintings in museums, galleries, and my friends’ studios.

I’m motivated by competition. I want to make better work than my peers and heroes.

Talking about painting with other painters over drinks recharges me.

Having my own work around to look at and learn from also motivates me.  I’ve yet to make a great painting. I’ve made some bad ones and a few good ones. Living with my own work reminds me of that and helps push me on.

Ego is also a motivating factor. I want my efforts to be seen and acknowledged and to have my vision and passion communicated.

I enjoy looking at and arguing about painting. I like to visit friends’ studios and go for walks around the city. I also like watching almost any old movie made before 1960. It helps if it’s in black and white. 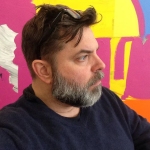 Paul Behnke was born in Memphis, TN and graduated with a BFA in painting from the Memphis College of Art in 1999.

Behnke’s paintings have been included in group shows and one-person exhibitions throughout the United States and abroad.

Recently his work was on view in the solo exhibition, An Awful Rainbow and in the curatorial effort, Eight Painters – both held at Kathryn Markel Fine Arts in Manhattan.

In 2014 Behnke was selected as one of the Sam & Adele Golden Foundation’s 2014 Artists in Residence and will attend in the month of October.

He current lives and works in New York City. 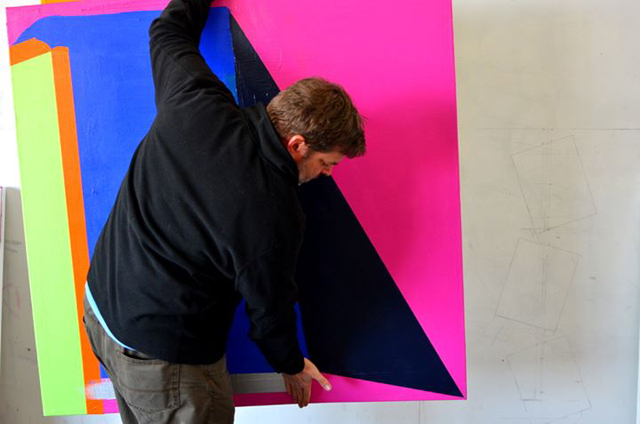 Working in the studio. Photo by James Panero