Posted on March 4, 2014 by greymattergallery

My recent prints are primarily engravings augmented with labored aquatints and its imagery initiates a conversation about our relationship with animals. We assign roles and values to various species based on their function, visual appeal, convenience, or even on a trend. I am interested in how we morally justify – or have difficultly in justifying – these value placements. Most recently, my work has focused on the animals we eat versus the animals we love as companions. I created a hypothetical, utopian narrative based on a consumable pet animal product called, The Meatimal™ (Tender and Sweet, They’ll Lie At Your Feet, With Succulent Meat, It’s The Pet You Can Eat!); the premise of the Meatimal™ is imaginary and irrational in its justifications, and its absurdity points to our ethical contradictions regarding our relationships with animals.

As a printmaker specifically, I see parallels between the histories of printmaking and animal production in their mechanical and commercialized reproductive systems. These repetitive industries often desensitize the individuality of each product. Due to mass production, prints and animal commodities both struggle to be valued as a unique entity and to obtain an appreciative understanding from its viewers or consumers. I find it a fulfilling challenge to convey the individuality of mass produced animals in a medium that primarily functions in creating copies.

Ever since I was a young child, I’ve wanted to be an artist and I remember thinking if I couldn’t do that, I wanted to a veterinarian. I have always been around animals. Growing up, we had dogs, cats, horses, and reptiles. Our neighbors raised buffalo while my other neighbor had chickens and a cow. When I was young I lived out in the rural landscape of Missouri and often played outside on our property, which exposed me to an array of wildlife. I constantly drew my pets or images from books and repeatedly watched movies like “The Last Unicorn,” “Milo and Otis,” or “The Lion King.” I grew up seeing our subordinate beings as an important aspect to this world and never quite understood why we (humans) occupy such an immensely higher status. Animals have always been prominent figures in my work. 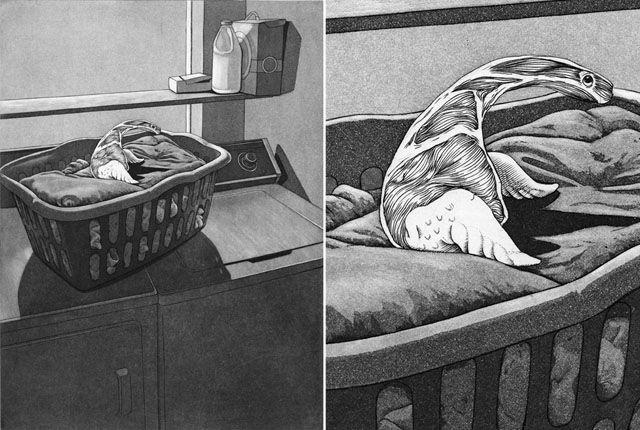 I perform a lot of research for my work; reading books or talking with people primarily inspires me. Some examples of research I’ve done for my work are visiting butchers, acquiring access to slaughtering and rendering plants, studying pet stores or shelters, and taking subject-specific classes. During my graduate studies, I took a lot of classes in food science where I gained an in-depth knowledge of meat processing and manufacturing. I also was enrolled in an Ethics of Animal Agriculture class in the animal science department. These were highly influential to my work. Speaking directly to professionals in the fields I’m interested in often yield very visual narrative, which I then translate into my work. Otherwise, my studio practice in creating is similar to that of a traditional printmaker: I sketch out my ideas and compositions, recreate a finalized image on a plate, etch or engrave the plate, print, respond, adjust, then print a final edition. I enjoy being a printmaker because of its unique process of creating images; I never get bored. 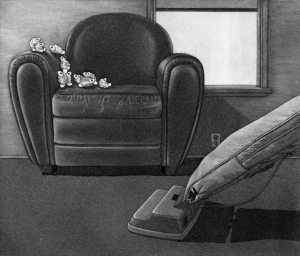 Although I have always loved drawing and have been a draftsman at heart, I had
no idea I was going to be an engraver or a printmaker. In my undergraduate, I was introduced to engraving arts (focused on guns, jewelry, metals, and objects), which fortuitously introduced me to printmaking. I am very attracted to the unique linear quality of engraving that is unlike anything else and is so strongly related to drawing. The printmakers of the world are a small community, or at least smaller than that of painting or sculpture, and the engravers of the printmaking world are even smaller, so I feel unique in that regard.

I try to be in my studio as much as possible, especially if there are no lingering deadlines for other art-related agenda. If I have a completely free schedule, my day is spent in my studio and hiking with my dogs.

Overall, my work has become quieter. I used to make statements in my work and have since decided, rather, to ask questions. The more I research, the more I find the issues in the human-animal relationship are much more complex than I initially thought. My work has stayed the same in regard to its focus on animals and has continued to have a strong linear quality.

I admire artists such as Albrect Dürer, Francisco Goya, Edward Gorey, Jan Švankmajer, Noir Nouar, and Patricia Piccinini. Some influential essays/books are William Ivins’ “Prints and Visual Communication,” Dr. Hal Herzog’s “Some We Love, Some We Hate,
Some We Eat: Why It’s So Hard to Think Straight About Animals,” Richard Sennett’s “The Craftsman,” and Jon Mooallem’s “Wild Ones: A Sometimes Dismaying, Weirdly Reassuring Story About Looking At People Looking At Animals In America.” Ultimately, my partner, my peers, fellow artists, and professors have always played a large role influencing my artistic practice.

I would probably be a wildlife conservationist in order to aid those who cannot communicate or fight for their land and to educate to the public about the essentiality of maintaining our ecosystem.

Ashton Ludden is a meticulous printmaker and engraver. She received her MFA in Printmaking from the University of Tennessee in 2013 and her BFA in Engraving Arts and Printmaking from Emporia State University in 2009. Ludden’s works have been exhibited nationally and internationally as well as at conferences such as the 2012 Animals, Ethics & Law Symposium and the 2013
International Veterinary Social Work Summit with keynote speakers Dr. Temple Grandin and Dr. Hal Herzog. She was an artist-in-residence at the Academy of Fine Arts in Wrocław, Poland in May 2012. Ludden was awarded the 2013 Frogman’s Graduate Scholarship Fellowship and the 2013 Emporia State University Liberal Arts & Sciences Outstanding Recent Graduate Award.

She is currently teaching print and book workshops at the Arrowmont School of Arts and Crafts and an intaglio workshop for Knoxville’s Community School of the Arts. She is an active artist member of the Vacuum Shop Studios Collective in Knoxville, TN. 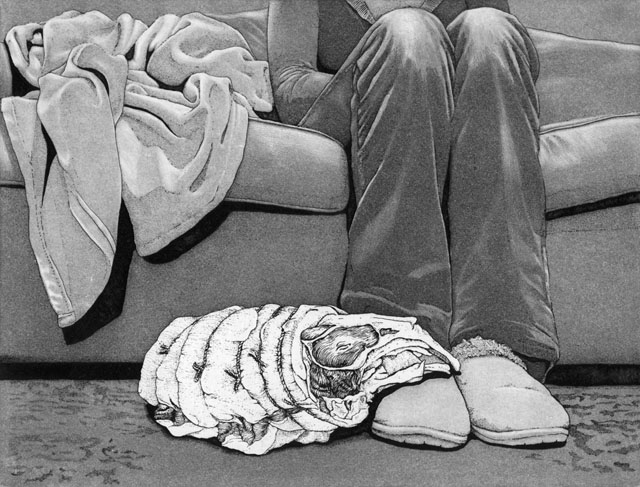 This entry was posted in Uncategorized and tagged Animals, engraving, meat, pets, printmaking. Bookmark the permalink.