Posted on February 21, 2014 by greymattergallery

Once I have a solid concept down I go through the process of building and priming a canvas.  I roughly draw out the image on the canvas and start applying layers of paint.  The first layer is always a neutral acrylic, for faster drying time.  I slowly build the painting through thin layers of opaque and transparent glazes.

Lately, I’ve been combining realism with geometric design elements stemming from patterns found in nature. I’m trying to balance the cleanliness of graphic design with the occasional overwhelming complexity that realism brings.  I tend to work back and forth between achieving aesthetic goals and creating more symbolic imagery.

When my sister and I were about 7 or so, my parents started taking us to the local art center where they had art classes for children.  I was about a Junior in high school when I decided I wanted to go to art school.  I was always encouraged by my parents to pursue an artistic career.  It’s sometimes hard now as an adult to justify spending so much time on artwork that might never make it out of your studio, but I can’t see myself living without painting.

Growing up in rural Michigan, the outdoors were a source of influence because I was constantly out in nature, and my love of wildlife (unsurprisingly) found itself in my work.  I also helped (or just watched) my Dad with his wood working projects. My appreciation for the use of materials came from those experiences.

When I started painting, I gravitated towards surreal images and used a more spontaneous approach. I was greatly influenced by Dali and Tanguy so I would emulate their styles.  I slowly moved away from surrealism after I started learning more traditional painting practices in the college courses I took.

As a result, my location-based notions of the outdoors and nature collided with my painting preferences. 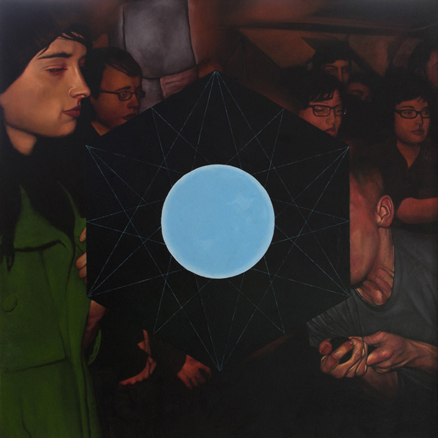 Lately I’ve been trying to hone my technical skills and create balance in every composition through the use of figures, line, and shape.  Even though balance can be considered a formal element, I’ve always had a fascination with it as it relates to nature.

I can’t see how Chuck Close has never been inspired by anything or anyone; come on Chuck!  I have to be motivated to work hard every day and sometimes that takes more than just telling myself to get in the studio and paint.  I love going to museums and openings to get the creative flames burning.  Seeing great live musical performances also pushes me to set ideas in motion.  If I ever come to a creative road block, one way I’m able to work out the problem is by going for a really long bike ride or run.  Anything physical and repetitive enables my mind to work through any creative kinks. 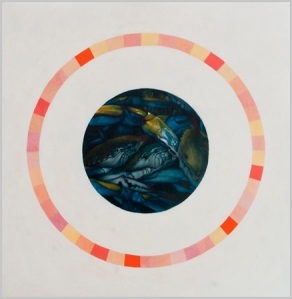 I’ve recently have become rather obsessed with cycling and plan to start riding competitively this spring.  I plan on riding a 200 mile bike ride in July with my girlfriend and competing in several criterium races, where you ride around in a loop several times with approximately 50 other riders.  Basically like Mario Kart except without the turtle shells.

It’s been hard to get in the studio in the spring and summer, so I usually dedicate the colder months to art-making.

Matt Maniscalco is a painter, illustrator and graphic designer living and working in Chicago.  He was born in 1984 and lived in Michigan until moving to Chicago in 2010.  Matt received his B.F.A. in Illustration from Kendall College of Art & Design in Grand Rapids, Michigan.  Matt has been in many exhibitions and sold his work worldwide.  He helped run Black Cloud Gallery in Chicago and worked on a freelance basis with RR Donnelly, JW Marriott Hotels and Bentley Motors.  He currently works as a full-time illustrator at P.S. Greetings and paints during the nights and weekends. 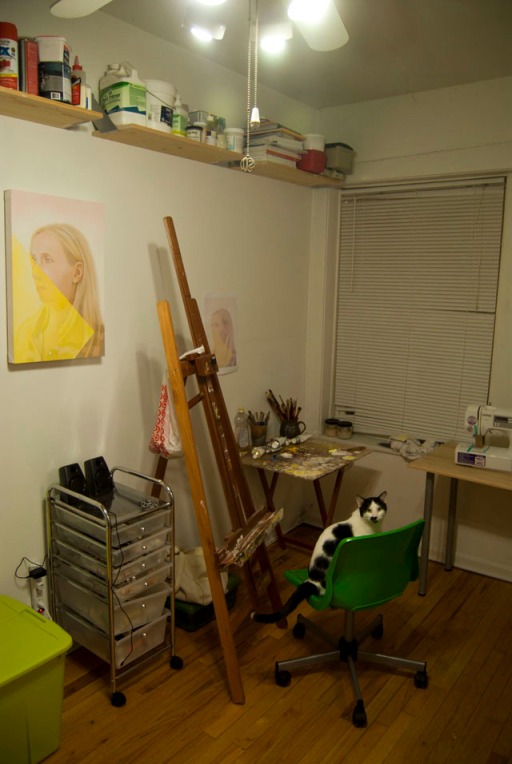 This entry was posted in Painting and tagged artist, Chicago, Figurative, Painting, Realism. Bookmark the permalink.