Posted on February 3, 2014 by greymattergallery 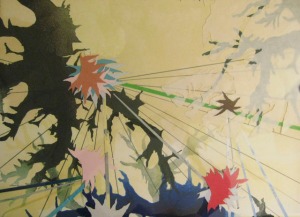 I used to make prints. Recently, printmaking is one layer in making other hybrid installation and collage work.

I grew up in Denver, Colorado.  I am an artist and an educator, but most recently took a break from teaching to focus on my own work and to travel with my partner.  I have lived in Asia and Africa for short amounts of time. It was during my travels that I felt a deep motivation for making art again. Perhaps because my experiences were so varied from month to month, I wanted to respond to what I was seeing.

I collaborate with many artists these days. That sometimes happens in a traditional print studio,  an installation space, back and forth via long distance, or a combination thereof. I think tradition is meeting hybrid experiences, and these experiences are leading to a richness in contemporary printmaking. 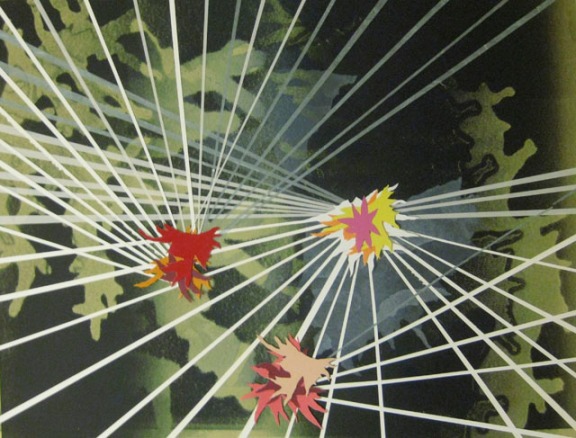 I began curating an annual print exchange last year, which had great success. I was able to oversee this huge project and have it come to fruition. I am presently receiving prints for the second exchange, entitled Westbound to Paradise which will be shown at Tyler School of Art in the Fall and California in March, among four other places. It feels good to see groups of printmakers share and exchange their work, and I have seen some really interesting prints the last few years up close, which is such a different experience than seeing it digitally. It’s a lot of work, but it is really rewarding.

In the morning. I work whenever I possibly can.

That’s a good question. I wasn’t able to afford print time for many years and this was hard on me in a lot of ways. I think if you are an artist and you cannot make work it is like taking a fish out of water. So, I began drawing and painting instead. The hiatus was actually very good for me in terms of growth as an artist. How is it the same? I think my art is always changing and never really the same.

? I love Judy Pfaff’s work and always have. There are a lot of writers I find inspiration from, and many artists….but mostly these days I enjoy working without too many censors or influences.

I can’t think of anything I would rather be doing. I would however, like to have a few assistants, unlimited grants and a huge space in which to work, if that could be arranged.

Fawn Atencio was born in Denver, Colorado. She studied at the University of Northern Colorado’s School of Art and Design where she earned a Bachelor of Arts degree in Art with a minor in Environmental Studies, graduating with honors. She continued her education in Printmaking and Drawing at Washington University in St. Louis, Missouri. With an interest that went beyond academic courses, Fawn assisted master printer Maryanne Ellison-Simmons at Washington University’s Island Press http://www.kemperartmuseum.wustl.edu/islandpress/ on a number of print projects for various guest artists from 1998-2000. She completed her MFA in 2000.

Fawn’s work has been shown internationally in New Zealand, Korea, Ireland, Germany, Italy, Argentina, Mexico and Canada. In addition, her work has been shown across the U.S. in states which include Hawaii, California, Nevada, New Mexico, Arizona, Idaho, Ohio, Iowa, Oregon, Texas, St. Louis, Pennsylvania, and New York. Prior to devoting herself to being a full time artist, Fawn took a sabbatical to travel, photograph, and live abroad for a year, backpacking through cities and towns in Egypt, Morocco, India, China, Macau, Hong Kong, Spain, Gibraltar, and Thailand. Before her year of travel, Fawn worked as an educator. Her work is exhibited internationally and is held in private and public collections. She currently works as a full time studio artist in Denver, Colorado. 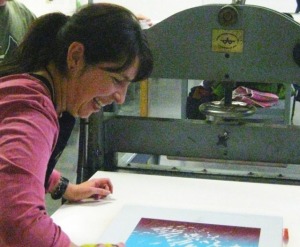 Fawn in the studio