Cultural Properties 67-918 2013
sumi ink, dust and pigment on calligraphy paper,
collaged onto Arches
22in x 28in

My artwork is varied in media and approach. Much of my work is mixed media, incorporating found images, drawing, painting, and forms of printmaking all together. I also often work in sculptural installation and even collaborative performance. I use this diverse practice to investigate the unexplainable gap between our day-to-day physical experiences and scientific or cultural “truths”.

My current project is inspired by my visit this summer (2013) to Wuhan, China, where I spent 6 weeks teaching and traveling. Rich with texture, pattern, and ornament, the busy city sidewalks became an important physical and visual experience- heightening my awareness of both my need to avert the attentive gaze of those around me, and the varied and cobbled terrain of the growing urban landscape.

While I was there I made a large number of monotypes on traditional Chinese calligraphy paper with pigment, ink, and water, responding to the historical significance of these local materials and traditions. The process for making these works became public performance- carrying my materials with me as I walked, I brushed the sidewalk with water and ink often gaining attention and the assistance of curious passers-by. Sometimes alone surrounded by a skeptical crowd, but more often working together, we pressed the paper onto the wet surface, absorbing the water, ink, and dust left by the Wuhan air. The resulting prints become like archeological records, reflecting the contradictions embedded between China’s esteemed ancient customs and the fleeting nature of its quickly shifting populations and places.

I moved around a lot both as a child and adult. I’ve lived in 9 different cities/towns including Detroit, Flint, Chicago and now Milwaukee for varying lengths of time. I often find myself thinking about navigation and how external influences like location change our understanding of our experiences. Recently influenced by my time in China, I have also started thinking about cultural landscapes- those places where humans’ physical alteration of the landscape becomes a reflection of those people’s attitudes about themselves. My process often starts with found sources like maps and historical records as points of reference to create works that explore experiences of observation, sensation, and fantasy. 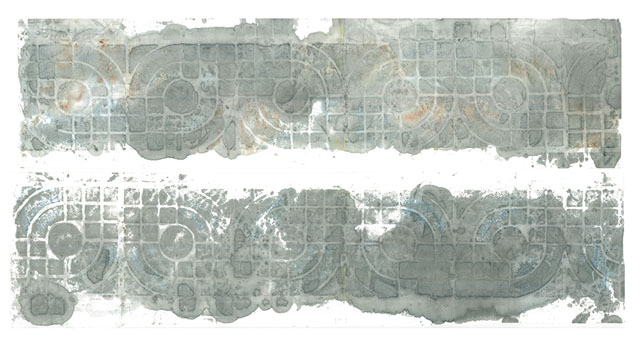 I tend to have different periods or categories of studio work that require different things from me.I definitely make work that benefits from that alone studio time- it is a reality of my practice. I also spend a lot of time using the internet as a resource and digital software for experimentation and research. When I am making sculptural work, it often starts with found objects, so the occasional trip to the salvage yard or surplus store becomes important studio time as well. But I also find great value in working with others. Collaboration a fantastic way to try new things and explore new territory. I am always open to a good collaborative project in my art making and in
my teaching.

Lately I have been thinking much more intentionally about entrepreneurialism and the role of the artist as business owner. I recently took a class about the Lean Start-up model and finding all of the ways it applies to being an independent creative is pretty eye-opening but also really exciting. 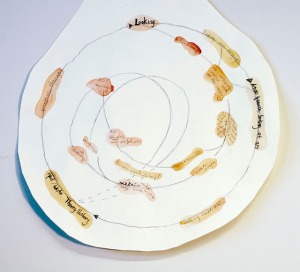 Working full time does impede my ideal studio routine, so during those busier parts of the school year, physical art making is more of a weekend thing. But there is so much else to do besides that physical making! There is thinking, planning, supply-attaining, application and proposal writing, opportunity finding, more writing, documenting, exhibition attending, and social networking to do during any “down time” I can muster. I really find that the only way I can get it all done is to have a very organized list and calendar system that reminds me what needs to be done each week.

This time in 2008 I was in graduate school and was starting a project called Daily Navigation, a site-specific installation at the American Geographic Society Library. For this project, I recorded and mapped the common pathways of each of the AGSL librarians and hand-stitched those paths into the library carpet. It was a very public process, working on the ground among the library patrons. I definitely see a relationship with the process I worked with in China, making prints directly on the busy city street. In both cases, I was thinking about making a record, the interaction between the space and the people in it, and the process of public art making – though
only one of the projects resulted in what would be called Public Art.

In graduate school I read a lot of art theory and philosophy, but the truth is I don’t think about it that much anymore. Rosalind Krauss and Maurice Merleau-Ponty have provided ways of framing or describing my interests, but not in a way that I think is important for anyone else at this point.

Well, I don’t really think that being an artist is my occupation, since I really don’t come close to making a living from my work exclusively. I am paid primarily as an art educator, and I love it because teaching art and design provides the opportunity to engage with core concepts of contemporary art practice everyday. But chances are that if I had not studied art, I would have taught something else- before I discovered I wanted a career in the arts, I thought I would be a school teacher. But I also realize my parents were very hands-off when it came to my plans for my life. I sometimes wonder what would have happened if I had been under any pressure to study something more economically respected, like medicine or computer programming (neither
of which I showed any real promise for). But who knows- I’m not sure I showed any promise in art either. I just liked being around it and working with my hands in that way. I feel like success is mostly about how hard you work at whatever it is that you do.

Leah Schreiber Johnson is a Milwaukee area artist and educator with an interdisciplinary studio practice. She has received multiple awards and honors including a Marshall Frankel Foundation Fellowship and a grant from the Wisconsin Department of Commerce. She participated as Artist-in-Residence at Vermont Studio Center in Johnson, Vermont, The Contemporary Artist Center in North Adams, Massachusetts, the American Geographical Society Library in Milwaukee, Wisconsin and with Milwaukee Public Schools. She has exhibited her work nationally and internationally including Illinois, Indiana, Wisconsin, Arkansas, Alaska, Pennsylvania, Maryland, Virginia, Vermont, Maine and Budapest, Hungary. She has taught at Lillstreet Art Center and the Marwen Foundation in Chicago and at Carroll University in Waukesha. Schreiber received her Bachelor of Fine Art from Illinois State University, and her Master of Fine Art from the University of Wisconsin-Milwaukee where she currently teaches full-time as Associate Lecturer in the Department of Art and Design at the Peck School of the Arts. 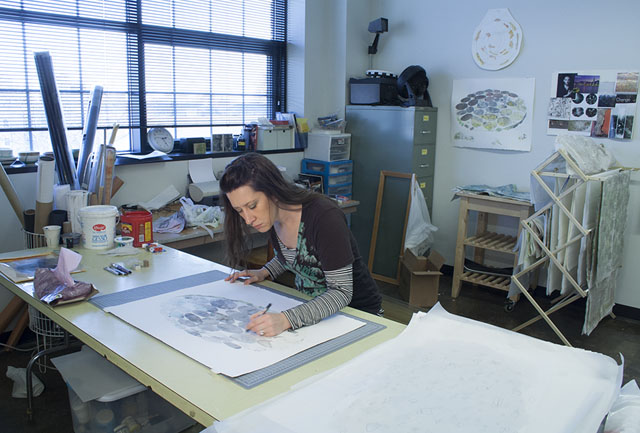 Founded in 2013, Artdose Magazine LLC is an independent print and digital art magazine committed to connecting and supporting the visual arts in the Midwest. Published by Frank Juárez, the magazine is premised on the belief that we all share common goals of introducing, engaging, and offering diverse art experiences. Artdose Magazine LLC appears in print as a bi-annual art magazine, through a weekly art e-newsletter and on Instagram and Facebook. About Frank Juárez Frank Juárez is a publisher, former gallery director, award winning art educator, artist, author, and arts advocate living and working in Sheboygan, Wisconsin. Organizing local and regional art exhibitions, community art events, facilitating presentations, supporting artists through professional development workshops, use of social media and networking has placed him in the forefront of advancing and promoting local artists and attracting regional and national artists to collaborate, network and exhibit in Wisconsin.
View all posts by Artdose Magazine →
This entry was posted in mixed media and tagged artist, China, cultural, interdisciplinary art, landscape, Leah Schreiber Johnson Milwaukee, Wuhan. Bookmark the permalink.